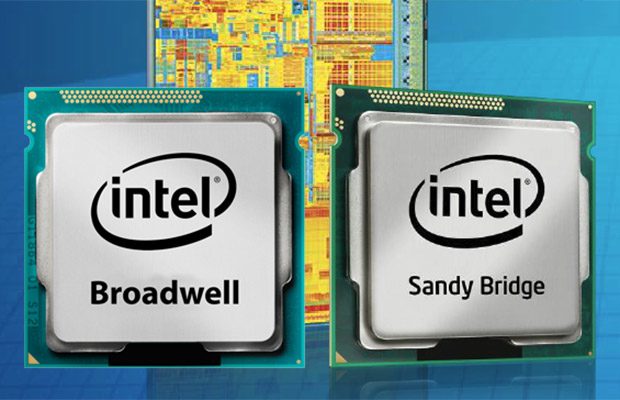 A couple of you asked how an Intel SandyBridge Core i7 M series processor compares to the recently launched Intel Broadwell U processors.

My old Lenovo ThinkPad X220 happens to run on an Intel Core i7-2620M CPU, the Dell XPS 13 packs a Broadwell Core i5-5200U and I’ve also tested several Core i7-5500U configurations lately. In this post we’re going to pitch these CPUs one against the other in a few benchmarks.

This comparison is actually more important then it might seem on a first look. Nowadays ultra-portables are exclusively built on Intel ULV hardware platforms, but back in the days of the SandyBridge platform (2011), some portable laptops actually bundled full-voltage M series processors. That’s the case of my ThinkPad X220, the Sony Vaio Zs and a few Dell and HP business machines. Of course, those processors weren’t as efficient as the newer platforms used today, but they were fast in their times and the configurations often allowed for 16 GB of RAM and various types of storage, which transformed these machines in compact power-horses.

In the following years Intel and the OEMs took a different direction: smaller and more efficient platforms and computers. But that left those that actually needed power more than anything craving for something that would be worth their money. Something that never came, which is part of the reason why I’ve kept my old X220 all these years. That hasn’t changed today with the Broadwell U platform, but the question is whether the performance of this 2015th platform has surpassed that of the old Core i7 M-series SandyBridge processors.

First though, let’s have a quick look at the processors involved in this comparison. I’ve also included a SandyBridge QM i7 processor in there, the i7-2670QM, which was one of the most popular such CPUs in 2011.

And a few things to consider before we proceed:

With that in mind, here are the results:

There’s no point comparing the graphics performance, since the Intel HD 5500 is miles ahead of the HD 3000 embedded on the SandyBridge processors, while the Core i7-2670QM processor was pretty much always paired with dedicated graphics anyway. In fact, the Intel HD 5500 chip can handle most of the things one would throw at it, including 4K video playing/streaming and light gaming.

When it comes to the raw CPU power though, the old Core i7-2620M is only barely surpassed by the Intel Core i7-5500U in benchmarks. As a whole the Broadwell i7 is of course a more versatile option, due to its efficiency, faster graphics and various other platform improvements, but also because it’s paired with overall faster components in nowadays configurations. In fact, even the Core i5 powered Dell XPS 13 feels snappier in daily use than my Lenovo X220 and boots up a faster, although it trails it in raw CPU benchmarks.

On the other hand, a Broadwell U processor is still not a match for the SandyBridge QM processors, which was of course expected. But that’s obviously not a fair comparison, as these quad-core CPUs were never intended for ultraportable laptops, unlike the modern Us and even the QMs.

When it comes to raw CPU power, the Broadwell U Core i7 processors barely outmatch the 4 years old SandyBridge M Core i7s

So, to wrap this up, if you have an older SandyBridge laptop and you’re looking for an upgrade, 2015 could be the right time to get something new. Just keep in mind that a Broadwell U top-tier configuration will not necessarily offer increased performance in heavy use and multitasking, but it is a major improvement when it comes to battery life, heat/noise and low-demanding activities. BTW, here’s a complete list of all the available Broadwell U portable laptops, in case you’re interested.

I for one took the plunge on the Dell XPS 13 and retired, at least for the time being, the ThinkPad X220. The new XPS is snappier in any everyday use, but when I launch Photoshop or Premiere, it doesn’t feel much different than my nearly 4 years old Lenovo. Thus for someone interested strictly in performance under heavy load, the upgrade might not be justified.

On top of this, if you need more than 8 GB of RAM on your machine, you’ll struggle to find any modern ultraportable that would fit the bill. With Intel’s next Skylake platform scheduled for the end of the year though, that could change (although I won’t hold my breath for it). So you could still hold on of your old machine and hope Skylake processors would be even faster and even more efficient, and maybe someone will actually build ultraportables with 16 GB of RAM by then. Maybe…