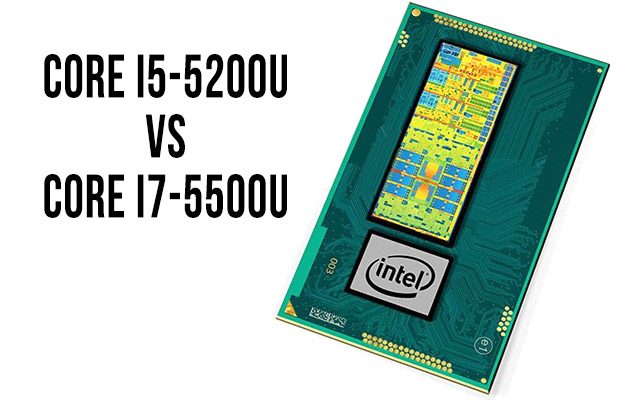 Most of the Broadwell U powered laptops you can find in stores right now are available with both Core i5 and i7 processors, and among them, the Core i5-5200Us and the Core i7-5500Us are some of the most popular options, as they are the base models in their classes (mid-range for the i5, high-end for the i7).

In this post we’re going to have these two side by side in a short comparison. At the time of this article I’ve already tested several configurations powered by the i7 CPU, as well as one powered by the i5 processor, the Dell XPS 13 2015 (here’s the full review).

Keep in mind that both of these are low-voltage processors from Intel’s Broadwell U platform, designed to provide a solid balance between performance and efficiency, but neither are very powerful and should not be your first picks if speed is what you primarily want in your laptop. If you do plan on getting a highly portable everyday laptop and don’t know for sure which of the two CPUS provides the best bang for the buck, then this post will answer most of your questions.

For starters, let’s have a quick look at the specs.

On a first look there’s not a lot extra offered by the i7 processor. It has 33% more cache memory and both the CPU and the integrated Intel HD 5500 graphics run at slightly higher frequencies than on the i5, but in everyday use you’ll hardly actually notice the difference between the two, if they would be placed on similar configurations (more about that in a second).

In fact, both can handle browsing, text editing, all sorts of multimedia content and even some casual or less demanding games. The i7 is 5-15% faster at high loads, but from my experience that’s nearly impossible to observe with the bare eye, even when having them side by side.

I’ve ran a couple of benchmarks and they also back-up what I’ve said above. Check the numbers. And make sure you also read the observations below.

And some gaming results, with all the titles running on 1366 x 768 px resolution with LOW graphic details.

The numbers above are of course affected by the other hardware components in your computer and should only be taken just as a general reference.

So what I’m saying is there are many variables that can affect benchmark results. But even so, the long story here is fairly simple: the Intel Core i7-5500U is not significantly faster in any way than the Core i5-5200U processor. And the difference between them is barely noticeable in daily use.

The i7 is however more expensive, by about $100. Thus, if you want a thin and light ultraportable for casual daily activities, a Broadwell U Core i5 processor would suffice and the i7 won’t offer a lot more on top. The i5 will also be slightly more efficient, as it runs at lower frequencies, which should only translate in roughly 5-10% longer battery life (varies which each implementation though).

Still, there’s another aspect to consider. Most manufacturers tend to bundle the i5 CPU with lower-end configurations only. That could include in some cases just 4 GB of RAM (which is most of the time soldered on the motherboard, thus not upgradeable), limited storage space (which again might not be upgradeable, although that’s not usually the case), but also other features like a lower resolution display or slower connectivity options (Wi-Fi N vs AC). Thus in some cases you might just be compelled to get the i7 anyway, which will generally cost you several hundreds extra, as this processor will usually be bundled with other upgrades.

So at the end of the day, while the Intel Core i7-5500U is not significantly faster than the Core i5-5200U processor, it does provide a 5-15% boost in some applications, especially those that require a great deal or resources. If that’s not the case and you only want a computer for casual use and everyday activities, the i5 should be your pick, if the available configurations suit your other needs and requirements (apart from processing power).

On the other hand, if you do need the speed, you should also consider the 28W versions of the Broadwell U processors, specifically the i7s, which are 10-30% faster than the 15W i7s and also bundle more capable graphics, but sacrifice battery life to some extent. Still, that’s something we’ll address in another article.

For now, that’s about it. That’s what I consider you should know about the Intel Core i7-5500U / i5-5200U processors and hopefully the article will help you better understand the differences between the two and decide which is the better pick for what you need. If you’ve got any questions or anything to add to the post, the comments section is open and I’m around to reply. And if you’re interested in Broadwell ultrabooks, you should definitely check out this other article, a complete list of all the Broadwell powered ultraportables available in stores.