In this article we’re discussing the 2023 update of the Asus ZenBook 14X series.

Last year, the 14X was the most powerful 14-inch Asus ZenBook available in stores and my favorite mid-sized Zenbook design ever, as concluded in our detailed review available here. I was still a fairly compact and portable laptop, and came in that geeky Space Edition variant.

This year, the 2023 ZenBook 14X UX3404 series is a completely new chassis, with an improved display and updated hardware specs, but is no longer the most powerful ZenBook, as Asus now offer a new ZenBook Pro 14 series as well (which we discuss here).

For now, I got to spend a little time with a preview sample of the updated 2023 ZenBook 14X, and down below I’ve gathered my thoughts on the important changes and features of this generation, in comparison to the previous series from 2022.

But first, here’s a full specs sheet of the two ZenBook 14X generations.

Then, the updated Zenbook 14X looks and feels different than the previous model.

It’s still an entirely metal chassis, but the pieces of aluminum are no longer anodized, but instead are this newer ceramic-like finishing called PEO – Plasma Electrolytic Oxidation. It’s supposed to be more durable than anodized aluminum, a lot more eco-friendly, and better at dealing with smudges and finger oil.

Asus offers the laptop in two color versions, a lighter one called Sandstone Beige and a darker one called Inkwell Gray. Here are some preview pictures of the two. 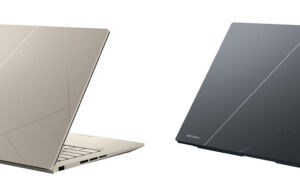 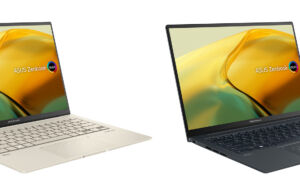 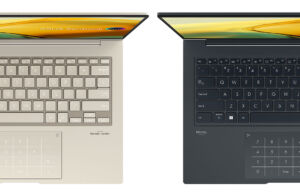 The one I’ve got my hands on is the Gray model, and throughout the article, I’ve included a few more real-life images of it.

The design resembles that of the standard ZenBook 14 UX3402 , with the minimalist branding elements and the few straight lines on the lid, and I found it an improvement of the previous ZenBook design language, with the concentric circles on the lid.

The ceramic coating feels grippy and a little rough to the touch, like fine sandpaper. It was also capable of better hiding smudges than I expected on this dark-gray model – I did clean it a bit for the photos, but didn’t have to insist much. 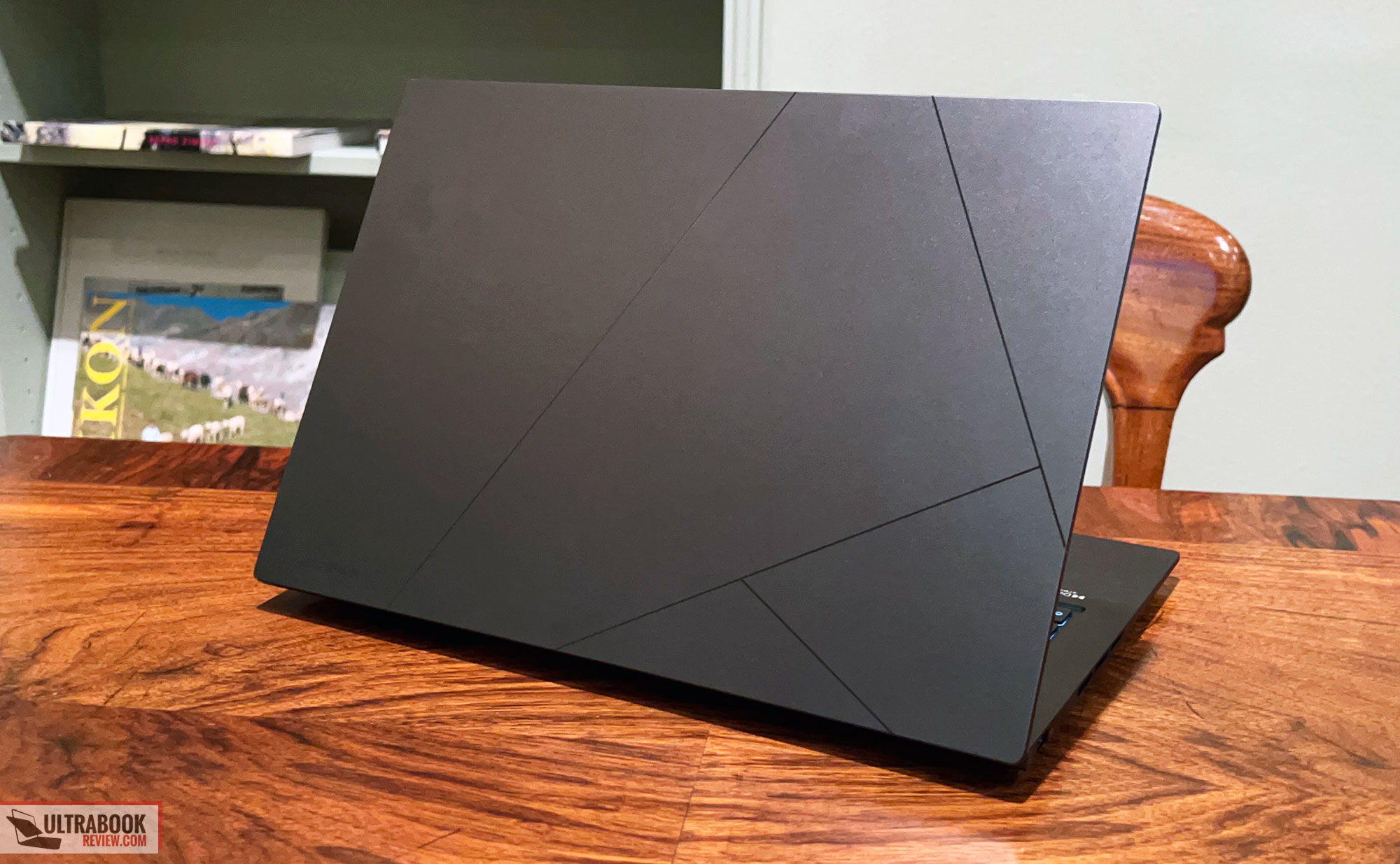 That aside, the larger chassis allows for a 14.5-inch 16:10 display with fairly sized bezels all around. The panel could have been implemented in a more compact chassis, though, as there’s still a noticeable chin underneath the display.

The panel itself is the newer 14.5-inch OLED from Samsung, with 120Hz refresh and fast response times, excellent contrast and blacks, up to 600 nits of HDR brightness (and around 450 nits SDR), and 100% DCI-P3 color coverage. This is a little larger than the 14-inch screen on the previous ZenBook 14X, as well as a little brighter – this is greatly appreciated on this sort of glossy displays. It supports touch and pen input, and the hinges allow the screen to fall back flat to 180 degrees. 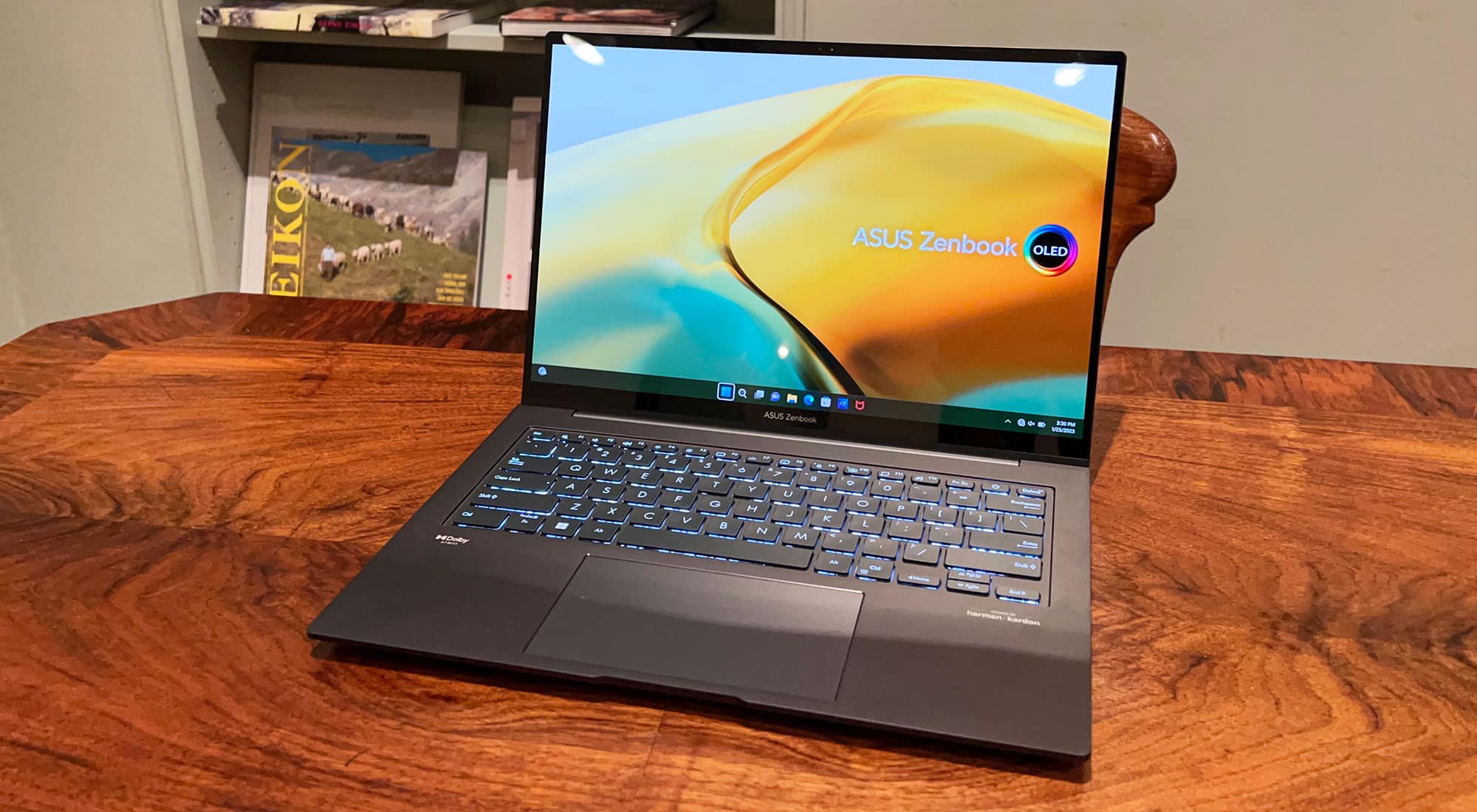 The inputs are fine on this laptop, the standard ZenBook assortment with one of the better keyboards in the space and a spacious glass touchpad that doubles as a NumberPad. Asus offers color-matched inputs on the two color versions.

Unlike on the previous ZenBook 14X, there’s no longer a finger-sensor in the power button (key) with this generation.

Biometrics are handled by an updated camera with IR and ALS support, as well as higher 2MPx image resolution. 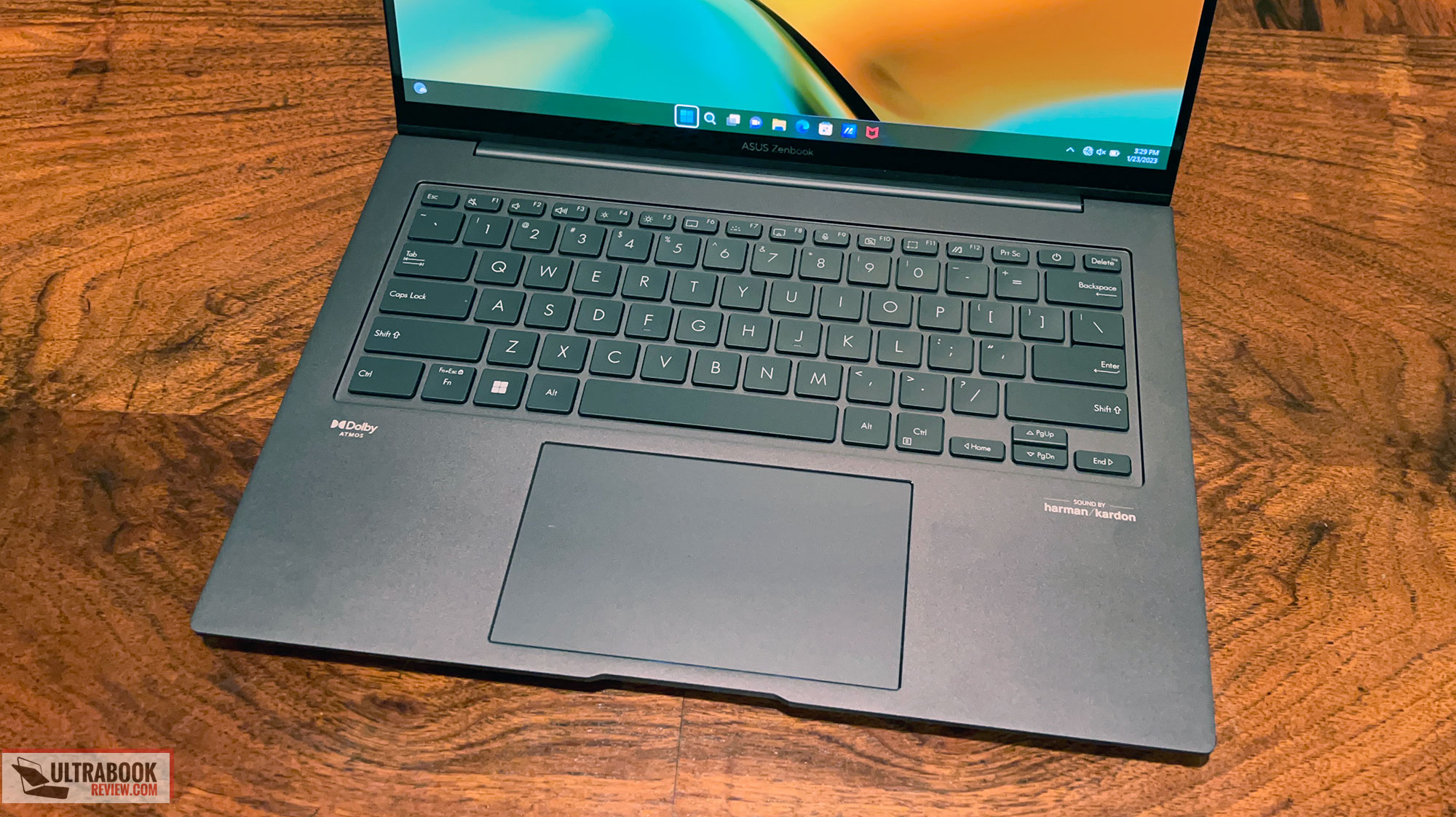 The speakers haven’t changed, and fire through the bottom side of the laptop, from the grills on the tapered edges.

Speaking of, here’s the underside of this laptop. 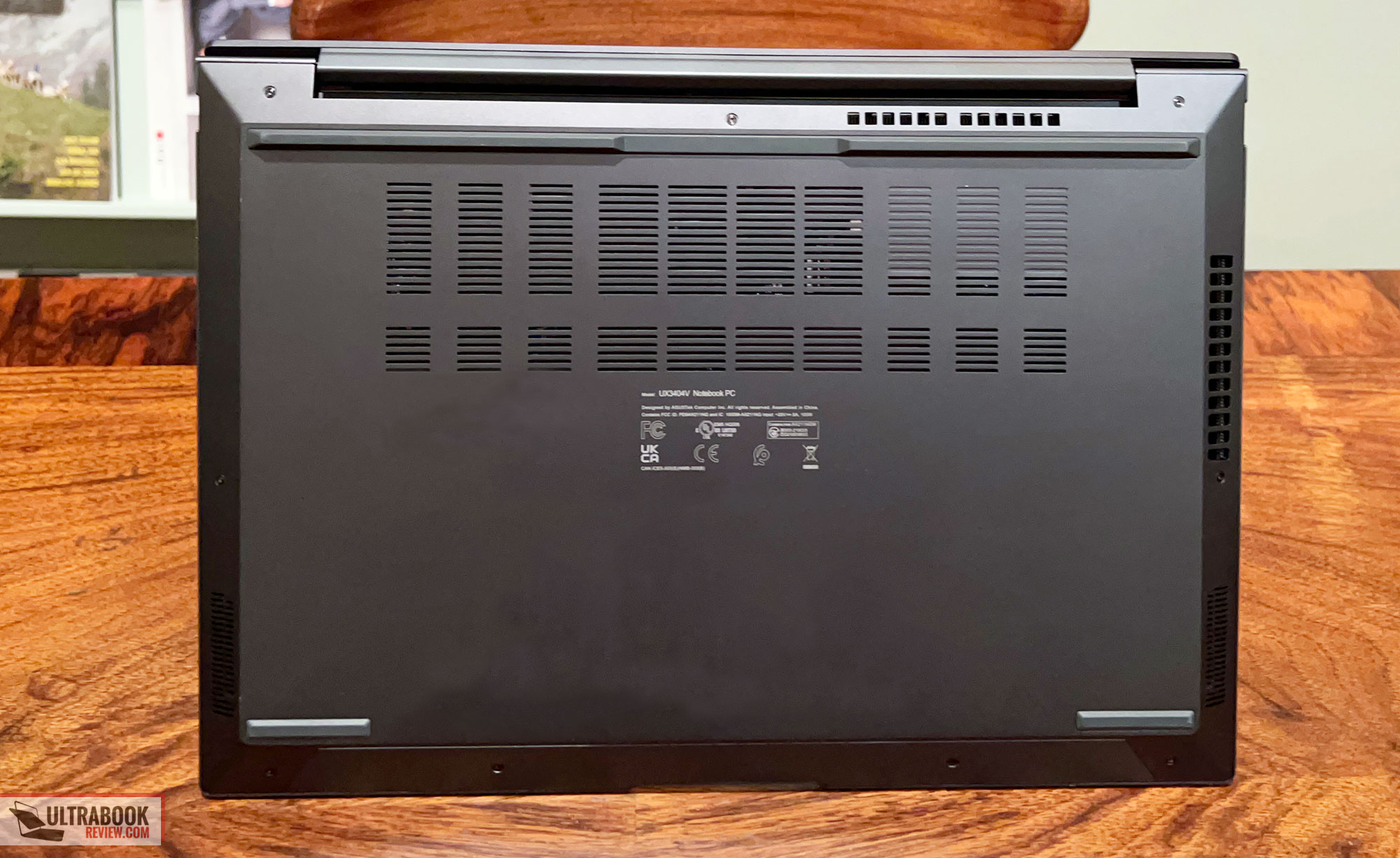 It’s different than on the previous ZenBook 14X UX5401 series, and so is the entire IO layout. That’s because the previous generation implemented a dual-fan dual-heatpipe thermal module with radiators on the left and right edges, while this generation implements a single radiator on the right edge. This is one more aspect that the 14X UX3404 series shares in common with the ZenBook 14 UX3402 models and the older 2021 ZenBook 14X UX5400 design.

As a result, the IO is mostly grouped on the left side of the laptop, where you’ll find all the ports except for the USB-A slot, placed on the right. There seems to be no microSD card reader included with this 14x generation (to be updated), but the full-size HDMI port is now 2.1 and the USB-C ports support Thunderbolt 4 with full capabilities. An audio jack is available as well.

I do worry about the cooling capabilities of this design. I wasn’t allowed to open up this sample, and from what I can tell, the thermal module consists of a single fan, two heatpipes, and a single side radiator, like on the 2021 ZenBook 14X UX5400 series –  I haven’t reviewed that one, but from the existing reviews, it didn’t run as cooly as the dual-radiator design in the ZenBook 14X UX5401. And yes, I know, these Asus product names are very confusing.

Nonetheless, the thermal design is going to be crucial on this ZenBook 14X update, as this generation can be specced up to a Core i9-13900H processor and an RTX 3050 4 GB dGPU now (probably running at around 35W or so). That means the cooling must tame around 50W of sustained combined power, which is no easy feat in this sort of thin chassis. Look for more details on this matter in our future review.

The internal specs also include up to 32 GB of RAM (DDR5, soldered on the motherboard), gen 4 SSD storage (single slots, M.2 2280 format), and a 70Wh battery, a little bigger than the 63 Wh battery in the previous ZenBook 14X. This laptop still charges via USB-C and comes with a compact 100W charger.

As far as pricing and availability go, there’s little I can share at this point, but I’d expect the ZenBook 14X UX3404 in stores in the next few weeks with mid-range prices around the 1300-1500 USD/EUR level (to be updated).

That’s about it for now on this 2023 update of the Asus ZenBook 14X series.

I’m surprised Asus chose to continue developing this series from what was previously the 14X UX5400 chassis with Core U processors and mid-level cooling capabilities, instead of following up on the ZenBook 14x UX5401 model with the dual-radiator cooling, but hopefully, this design can handle the updated specs in this generation, and won’t cause this laptop to run hot and/or noisy under load.

This aside, the 2023 Asus ZenBook 14X looks like a solid update, with faster specs, a bigger battery, and an updated display, as well as arguably a more practical and friendly construction. I’m curious about your thoughts on this update, though, so get in touch down below.