These days there are quite a few different mid-range all-around laptops in the sub $1000 price range to choose from, and many are available with either Intel Core H35 (Core i7-11370H or lower) or AMD Ryzen H45 (Ryzen 7 5800H or lower) hardware.

Opting for one variant over the other isn’t entirely straightforward, that’s why I put up this comparison guide that will explain the differences between these two platforms and help you choose the one that best suits your needs.

This article is based on our extensive reviews of two identical mid-tier laptops, the popular Asus VivoBook Pro 15 series available in either the AMD – M3500 or Intel – K3500 variants, both with 16 GB of DDR4-3200 memory and the same RTX 3050 graphics chip. This sort of comparison of identical designs is ideal to showcase the differences between the AMD and Intel hardware in various activities.

We’re primarily looking at the CPU performance in this article, but we’ll also comment on the everyday use experience with the two notebooks, on efficiency and thermals, as well as on the performance in mixed workloads and games. Just keep in mind that the mixed performance is influenced by the choice in GPU, and the results might differ if you opt for a different graphics chip.

The Ryzen chip also requires more sustained power in order to be able to run at its full potential, but even so, it has a design advantage over the Intel i7 in multi-core and multi-threaded loads. The AMD platform is also more efficient with light loads and daily multitasking on battery, mostly thanks to the more advanced 7nm build process.

On the other hand, the higher single and multi-core clocks of the Intel Core H35 chip, corroborated with the improvements in IPC over the Ryzen Zen3 platform, allow it an advantage in single-core clocks and light daily multitasking. Furthermore, the Intel chips also benefit from a few extra perks such as support for faster PCIe gen4 storage, better WiFi+ integration, and support for Thunderbolt 4.0 or QuickSync.

Both chips come with integrated graphics, with Radeon Vega on the AMD processor and Iris Xe on the Intel side. For the most part, the Intel solution is up to 25% faster in GPU loads and games, based on our tests. We’ll touch on this down below, as this aspect would weigh in heavily if you decide to opt for configurations without any sort of dedicated graphics.

Before we get to talk benchmarks and numbers on the two Vivobook Pro 15 models down below, make sure to understand that not all laptops are created equal and that the performance is going to differ between units, based on their power settings and thermal designs. These are the kind of information we go over in our reviews.

As mentioned earlier, we’re looking at two identical test laptops here, one built on in Intel Core i7-11370H platform and the other on an AMD Ryzen 7 5800H.

Both are bundled with 16 GB of single-rank dual-channel DDR4-3200 memory, PCIe x4 SSD storage (with a faster drive on the AMD model, though), and the exact same kind of RTX 3050 Laptop dGPUs, with the same Nvidia Studio drivers (472.39). Both are also the exact same chassis and thermal design, so this is as much of an apples-to-apples comparison of these two processors as it can be.

So with that out of the way, we’ll first touch on the sustained CPU multi-core performance in the Cinebench R15 loop test, which runs the same test for 15+ times in a loop, with 1-2 sec delay between each run.

This test clearly favors the 8C/16T Ryzen 7 5800H processor, which ends up outscoring the 4C/8T Core i7-11370H by as much as 80% on the Performance profile, by 2x on the middle-ground Standard profile, and by almost 3x when the two laptops run in battery mode.

At the same time, the Ryzen configuration also runs at slightly higher power in all cases, which results in a slight increase in noise levels over the Intel variant, as well as higher internal temperatures. On the Performance profile, while the Intel CPU averages 82-84 degrees Celsius on Performance mode in this test, the AMD CPU runs at 88-90 degrees Celsius. Both are within their design tolerances, though.

I’ll also add that both these processors stabilize at roughly 85-90% of their maximum potential in these VivoBook Pro mid-tier designs, and they would be able to perform 7-15% higher in beefier notebooks with more complex cooling modules. 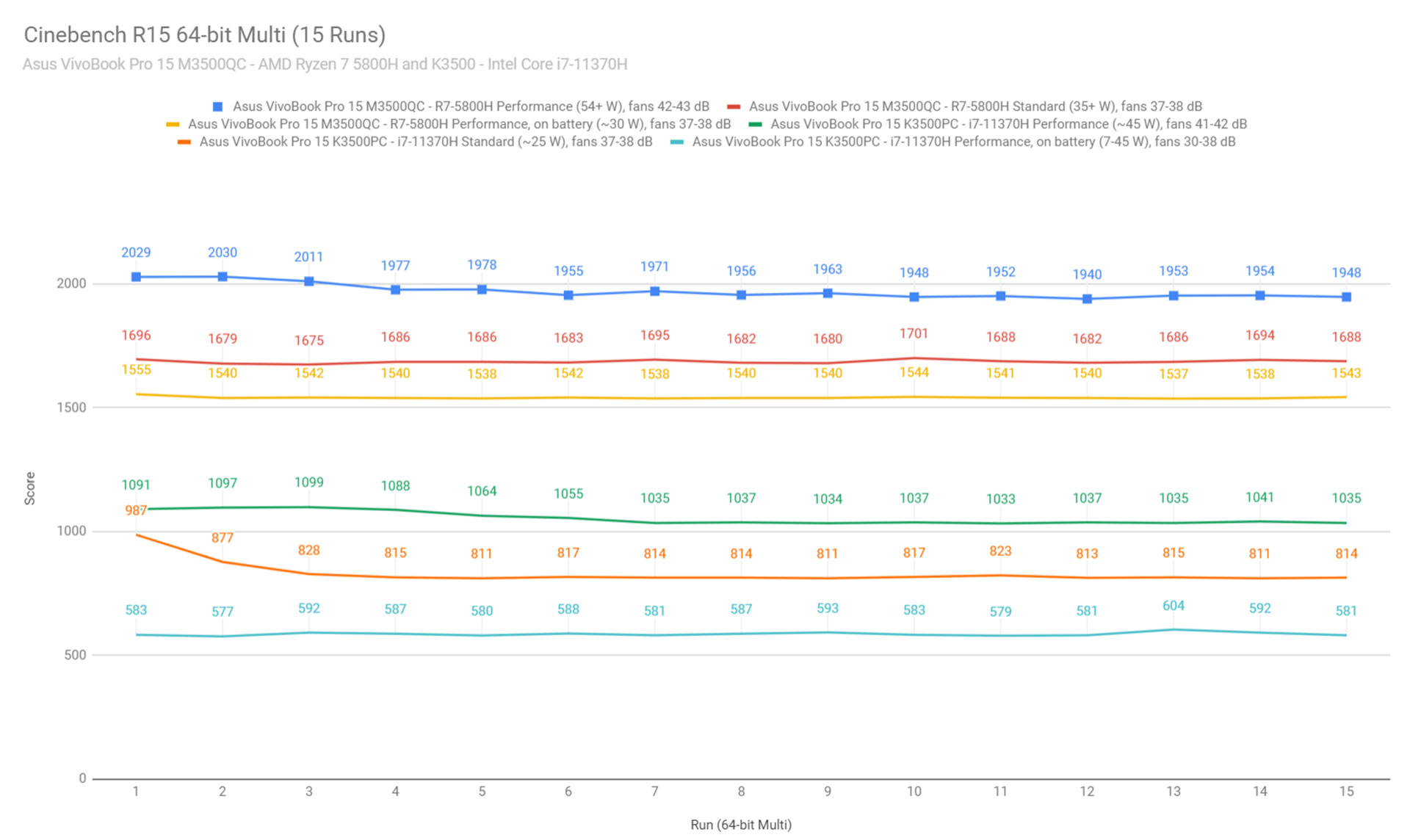 We’ve also confirmed these findings in the more taxing Cinebench R23 test, in which case the CPUs ended running at the same 45+W sustained on the Intel model and 54+W on the AMD unit, with higher temperatures and noise levels on the latter. 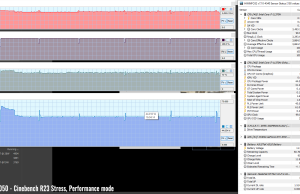 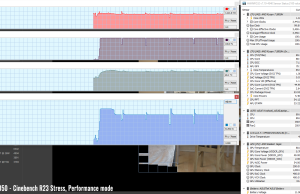 We also ran the 3DMark CPU test, which showcases the differences between these processors in single to all-core loads. The Intel i7-11370H wins over the Ryzen 7 5800H in the single and dual-core tests, and then starts trailing behind because of the fewer cores/threads. This is a good introduction to our next suite of benchmarks and tests that better showcase the capabilities of the i7 processor in single-core loads. 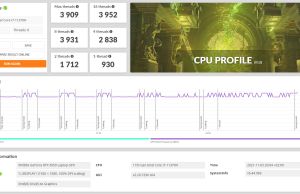 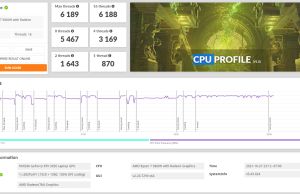 OK, so here’s our full suite of benchmarks on these two platforms. It’s important to mention that both run on 16 GB of DDR4-3200 memory in dual-channel, soldered on the motherboard and non-upgradeable, but there’s a slightly faster 1 TB SSD on the AMD model, which slightly impacts the PCMark10 scores, but should not influence the others.

The GPU scores are identical between the two since both are the same Nvidia RTX 3050 dGPU, with Optimus.

We also ran some Workstation related loads, on the same Performance profiles. Once more, the Ryzen platform wins in the CPU-heavy loads such as Blender or V-Ray, and the two are neck in neck in GPU and combined loads, but with a slight advantage for the AMD platform when it comes to editing video content in Davinci Resolve.

In all fairness, the Intel platform should have a slight edge in Adobe Photoshop or Premiere, which would benefit from its higher clocks and QuikSync support, but we didn’t get to run PugetBench on those.

For the most part, though, the AMD configuration is the better balanced and more capable choice here.

We also ran some GPU tests with the RTX 3050 chips disabled, indicative of what you’d get on these two platforms if you opted for the more affordable configurations the rely solely on integrated Vega/Iris graphics.

Take these with a lump of salt, though, as the Radeon Vega results are within 10% of what we tested on other laptops at similar power (such as in the Lenovo Yoga Slim 7 Pro), but the Iris scores are 15-30% lower in comparison to other Core i7 H28 and H35 laptops that we’ve tested at similar power levels (such as in the ZenBook 14X). Given how we tested both VivoBook Pro models by disabling the 3050 chips, I’d expect the retail units that only ship with the AMD/Intel chips to perform better thanks to optimized BIOS and drivers.

So expect the Intel models to outmatch the AMD configuration by 10-25% in GPU benchmarks and by 5-20% in specific GPU workloads or games. Would this compensate for the loss in CPU multi-threaded performance? Up to you.

Of course, the configurations with dedicated graphics negate this fragile Intel advantage, contouring the AMD configuration as the smarter choice here. But let’s not rush to conclusions, yet.

While neither of these laptops are primarily meant for gaming and they ship with productivity-focused Nvidia Studio drivers, we ran some tests on these RTX 3050 configurations.

You’ll find the full results in the detailed reviews, as in here’s we’ll only look at how the two fair at FHD resolution with Medium graphics settings, which makes the most sense for these RTX 3050 chips.

There’s hardly any difference between the two, and in fact, the AMD model wins in most games by a narrow margin. I was actually expecting the higher clocks and IPC of the Intel platform to positively impact the gaming performance and push the Intel configuration slightly in front here, but that’s not the case, at least on these Vivobook Pro laptops.

I will also mention that both laptops run at about 42-43 dB of fan noise at head level, so are fairly quiet. Both also put up about 70W of combined power in games, spread between the CPU and GPU, and are the same internal design with the same cooling module.

Despite these, the AMD configuration runs 2-7 degrees C warmer on the inside, both on the CPU and on the GPU, and marginally warmer at case level as well. 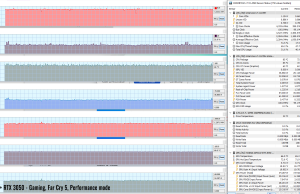 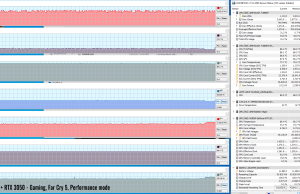 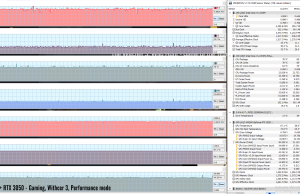 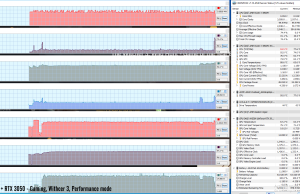 Battery life is one final aspect I’d like to touch on here.

Both variants run efficiently with light daily use and video streaming, with only a slight advantage for the AMD model. Given the 63 Wh batteries inside both laptops, expect 8-10 hours of streaming on the Intel configuration and 10-12 hours on the AMD model.

The AMD configuration proves more efficient with more serious multitasking and some workloads, though. In this case, realistically expect 5-7 hours of daily use on the AMD model and only 3-5 hours on the Intel model. This aspect might be the final nail for the Intel side.

In fact, pricing is going to have the final word here, and that’s because over here the AMD Ryzen 7 5800H configurations of the VivoBook Pro 15 sell for roughly 100 EUR less than the Intel Core i7-11370H variants, with or without the Nvidia graphics. And then, there’s also the even more affordable Ryzen 5 5600H configuration on the Intel side, which still outmatches the Intel i7 in multi-threaded loads by up to 40%.

Bottom point, if you’re looking at the lower-tier configuration of these laptops built on either Ryzen + Vega hardware on one side or Intel + Iris on the other, I would lean towards the AMD models for the superior multi-threaded performance, longer battery life, and more affordable pricing. Still, the Intel variants could make sense if you’re looking for a more balanced configuration that would benefit from the superior iGPU, for games or light Photoshop/Premiere use. Just make sure not to overpay for it.

Stepping up to the higher-tier configurations that add in any sort of dedicated graphics completely negates the iGPU advantage of the Intel platform, and the AMD platform becomes the clear recommendation over the Intel H35 configurations. There’s just no reason to get the Intel models instead at the current prices. And not just on these VivoBooks, but on most other notebooks as well, unless the Intel models are somehow at least 10-15% cheaper than the AMD models in your region.

This wraps up our take on the AMD Ryzen 7 5800H and Intel Core i7-11370H platforms, and I’d love to hear your thoughts and feedback as well, so get in touch down below in the comments section.