This article is going to help you pick up a high-end performance and gaming laptop in this second part of 2021 and later into 2022, by pitching the Intel Tiger Lake Core i9-11980HK processor against the AMD Cezanne Ryzen 9 5900HX.

These are the highest-tier mobile processors available at this point, and we’ve been reviewing them in a couple of different laptops in the last months, enough to offer you a detailed look at what to expect from them in benchmarks, real-life workloads, and games. Given their high-end tier, these Core i9 and Ryzen 9 CPUs are mostly available on RTX 3080 Laptop configurations, and that’s what we’ll also use for this comparison.

We’re primarily looking at the CPU performance in this article, and less so at the GPU scores and gaming experience, especially since OEMs tend to implement various different power variations of the RTX GPUs in their models, and certain aspects such as the kind of memory utilized and whether the design includes a MUX or not would also play important roles in the overall behavior of each notebook. That’s why you should only take this Core i9 vs Ryzen 9 comparison as a starting point in your research, and further look into in-depth reviews for the specific laptops that you’re interested in afterward.

As mentioned already, both these chips are 8C/16T, with the Intel i9 capable of reaching higher single-core and multi-core Turbo frequencies.

That aside, on paper, the i9 has a lower Base Clock, but that’s not important, as in real use the frequencies are always influenced by Turbo Boost and the power settings implemented by each manufacturer. And since you’re mostly going to find these processors on performance products, you can expect these to run at 50-100W in sustained CPU loads, varying between implementations: a lower TDP on the thinner and lighter options, and a higher TDP on the full-size desktop replacements.

Before we get to talk about benchmarks and performance results, I wanted to touch on the fact that Intel CPU is built on a 10 nm lithography and AMD on a 7 nm technology. This can be misleading because you cannot directly compare the technologies used by Intel and TSMC (which makes the AMD processors). In general, though, Intel’s 11thn gen Core i9 processors tend to require more power than AMD’s R9s for peak performance, and are also less efficient with daily use, something to consider if you plan to use your potential laptop unplugged more than occasionally.

At the same time, the newer Intel architecture benefits from a few technology advancements at this point, such as an increased amount of Cache memory, support for faster PCIe gen4 storage with a direct CPU connection for the SSDs, or better WiFi 6+ integration. The i9 also benefits from a couple of Intel proprietary perks, such as Thunderbolt 4 or QuickSync support, among others, which might matter for certain workloads and certain software suites.

We’re looking at two Intel i9 and two AMD R9 laptops in this article, with one chassis common between the two platforms. All our review units also get 32 GB of memory (the slower-latency SR kind that’s available today), fast SSD storage and RTX 3080 Laptop graphics. However, keep in mind that we have tested these laptops at different periods in time, so the software differences might have a small impact on our findings.

With that out of the way, we’ll first touch on the sustained CPU performance in the Cinebench loop test, which runs the same test for 15+ times in a loop, with 1-2 sec delay between each run. 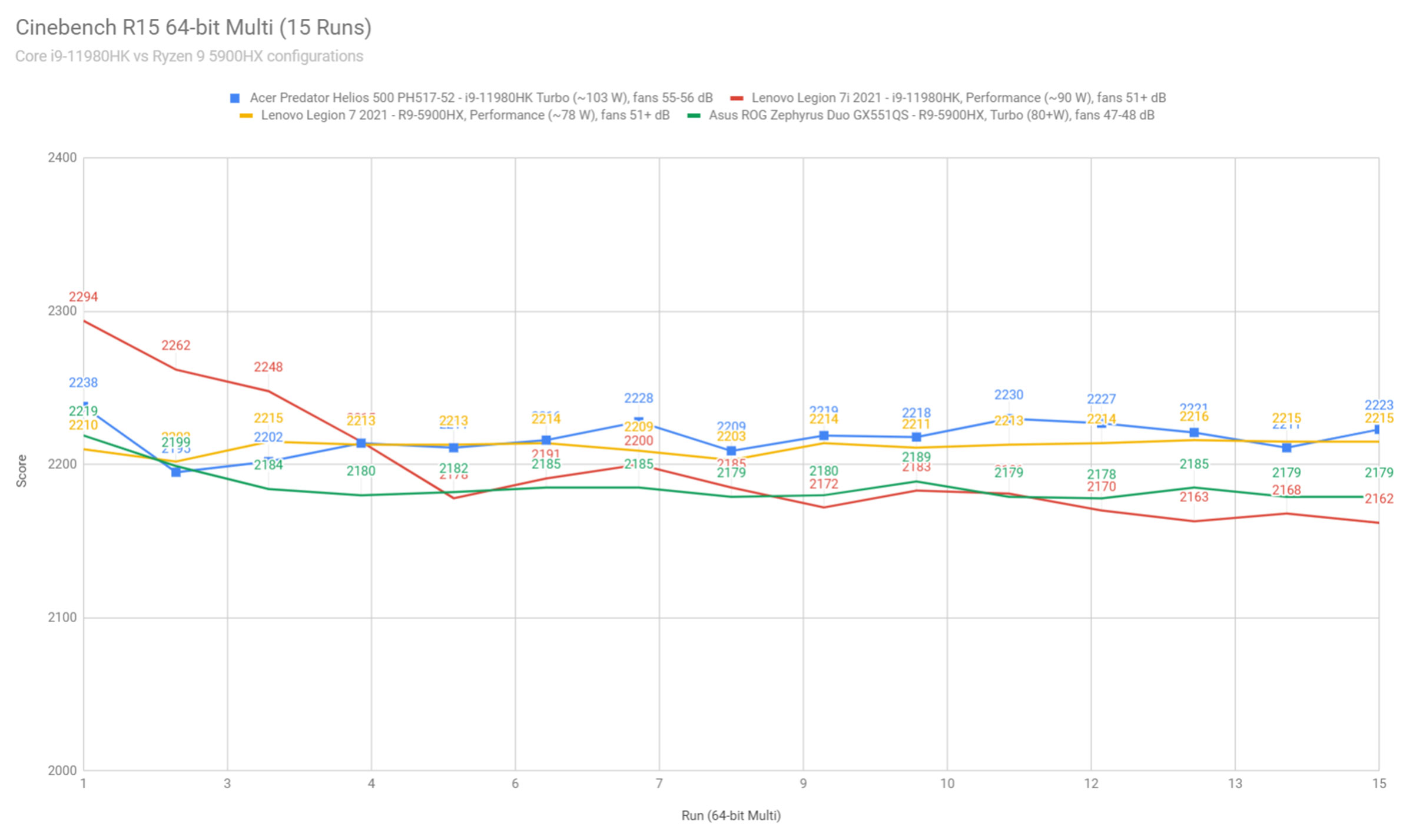 The performance differences in this multi-threaded sustained load are within only 3% on these tested implementations, so negligible.

Our test does show that the Intel i9 processors run at higher power than the AMD alternatives, and that there’s a difference in measured fan-noise between the tested models on their higher-tier power profiles. Furthermore, our detailed reviews will also offer more details on the internal CPU temperatures during this test; for the Legion 7 chassis, both the Ryzen 9 5900HX and the Core i9-11980HK averaged ~95 degrees C, with similar fan noise and despite the fact that the Intel CPU ran at 15% higher power.

With that out of the way, let’s get into some benchmarks results.

The Intel CPU tends to have an edge over the Ryzen 9 in these tests. We’re looking at roughly 3-8% higher scores in both single-core and some multi-core tests, although in multi-threaded loads the two CPUs trade blows between the different tests.

I also find it interesting that the RTX 3080 GPU scores a little bit higher in the Intel models, both on the Legion 7 and especially on the Helios 500, all being similar 3080 165W chips. The 3080 130W chip in the Scar 17 ends up ~7-12% slower than the higher-power 3080 implementation, which is not bad when also considering there’s no MUX on the Scar 17, while all the other laptops mentioned here get one.

We haven’t run our full set of Workstation benchmarks on the Legion laptops, so I’m not going to include them in this comparison. You’ll find details and results in the Helios 500 and Scar 17 reviews, though.

We should also mention that memory can impact these findings, especially on the AMD configurations. These test models are all using SR memory, and upgrading to lower-latency DR chips might impact the performance. However, upgrading to DR memory didn’t have a significant impact on any of the Legion 7 models, as explained in this review, and I haven’t tested the impact on the other two, so that’s a topic we should further look into in a future update.

We also ran a couple of games on our review units, to see how the two CPUs impact the experience in this case. To keep things consistent between the tested units, we’re only looking at the Ryzen 9 and Core i9 configurations of the Legion 7, at QHD resolution and Ultra settings. That’s because the Helios 500 and the Scar 17 are different-power RTX 3080 implementations, and one has a MUX and the other does not.

There’s little to no difference in framerates between the two configurations, with them trading blows in the tested titles. Keep in mind there’s a MUX on both the Intel and the AMD configurations of the Legion 7, which positively impacts the gaming performance.

We did measure some differences in temperatures and fan noise on these two Legion 7 variants. Here are some recordings in Horizon: Zero Dawn, on the Performance OC profile in both cases:

So the CPU and GPU run at marginally higher temperatures on the Ryzen 9 system, which also leads to the fans spinning slightly louder and noisier.

The external thermal readings are very similar between the two models, so I’ve only included a reading of the Intel model below.

Battery life is one final aspect I’d like to touch on here, especially with daily use activities and video streaming. The AMD configuration of the Legion 7 wins by a fair margin over the Intel model, capable of 5-8 hours of Youtube and Netflix streaming on a charge, while the Intel variant only lasts for 4-5 hours.

The differences are smaller when it comes to browsing and word-processing and everyday multitasking, with the AMD option still lasting 3-4 hours on a charge, while the Intel model only returns 2-3 hours of runtime.

The AMD Ryzen 9 5900HX and the Intel Core i9-11980HK platform are similar in overall performance, with a 7-10% performance advantage for the Intel platform in the implementations that allow to run the hardware at high power settings and maybe even make good use of the unlocked multiplier, such as in the Helios 500 mentioned here. At 80-90W of sustained power, though, such as in the Lenovo legion 7 chassis, the two chips are within roughly ~5% in single and multi-core tests, with the i9 still outmatching the R9 in most tests.

The newer Intel 11th-gen Tiger Lake platform also benefits from a few technological advancements that you’re not getting with the AMD Ryzen 5000 hardware, such as PCIe gen4 storage, Quick Sync, or Thunderbolt 4 support, among others. And on top of all these, the Intel i9 hardware still makes its way into a broader range of premium designs, even if the Ryzen 9 5900HX platforms are also available in a fair number of SKUs these days as well.

On the other hand, Ryzen 9 laptops have been available in stores for 6+ months now and are starting to get discounted in most regions, while matching Core i9 models are rarely available on sale. This makes the Core i9 models quite a lot more expensive than similarly-configured Ryzen 9 models, which could play a significant role in your final purchase decision, alongside the superior efficiency of the AMD platform, which should still weigh in heavily even at this level.

So while the Intel i9 has an edge in performance, features, and maybe SKUs over the AMD R9 hardware, in the end, you won’t go wrong with any of these in your next top-tier performance laptop. I’d also even consider going with a mainstream processor as well, in which case this guide on the Intel Core i7-11800H and AMD Ryzen 7 5800H should come in handy.

In fact, I’d advise looking past this Core i9-118980HK vs Ryzen 9 5900HX feud when choosing your next laptop, and rather consider the overall worth of your potential buy. Sure, performance matters plenty in this segment, but don’t neglect other aspects such as the build quality, inputs and screen options, thermals, battery life, and the amount of money you’ll end up paying for your device of choice. We cover all these aspects in our in-depth reviews, so make sure to check them out.