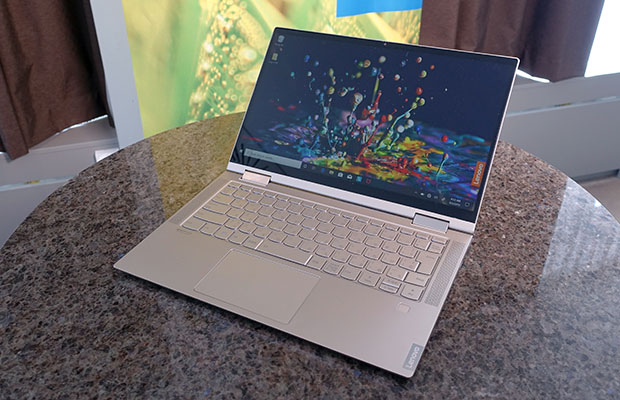 On September 5th 2019, Lenovo has just announced a host of updates to their ThinkBook and Yoga laptops, Smart-home devices, and monitor product lines.

The most interesting new devices for me are the new Yoga S740 and Yoga C940, as direct competitors for the popular Dell XPS 15 and Lenovo ThinkPad X1 Extreme performance ultraportables, but with their own perks and particularities.

These aside, I’d also closely follow the ThinkBook 13s, 14 and 15 notebooks focused on small and midsize businesses, as they represent a new direction for the Chinese OEM best known for producing the venerable “ThinkPad” line of notebooks.

Update: Int he meantime, we’ve spent more time with the ThinkBook 13s and gathered our thoughts in this detailed review.

The general concept of the “ThinkBook” (you can read more in the original press-release) is to provide a productivity machine for Millennials who Lenovo marketing believes desire thinner, more stylish devices as their workhorses.

Though they may carry “Think” branding, the ThinkBooks might be more comparable to the “IdeaPad” line of laptops, only with enterprise-level service and warranties. I’m not sure if this market segment really exists or not, but I can only assume Lenovo wouldn’t be expanding the product line if they didn’t see the market potential for it.

The new ThinkBook 13s, 14 and 15 models announced today offer some quite interesting features, however. In addition to being available with up to 6-core 10th generation Intel Comet Lake CPUs (note that these are the ULV versions, not -H series), these new ThinkBooks are some of the first to utilize Intel Optane DDR4 memory and AMD Radeon 620/625 graphics.

Intel Optane Memory is an interesting proposition as it similar to DRAM in function except that it is non-volatile, meaning stored data is not lost when the system is powered down. This should particularly improve boot-up performance similarly to the way “Hibernate” does, only without the power drain.

The ThinkBook 14 and 15 are also some of the first laptops to be seen with AMD Radeon 620 and 625 Graphics. Not much information is available on these GPUs yet, but from the product page on AMD’s website, it looks like these GPUs are going to be comparable to Intel’s UHD 620/HD630 line of integrated GPUs based on on the data available. At this point, it’s a bit unclear what advantages will be had by utilizing the Radeon 620/625 over the integrated Intel GPUs, but perhaps that will be more evident as more about these machines and the Radeon GPUs become known.

As for the Yoga lineups, notable changes include:

The slick looks and (relatively) powerful specs of the S740 15 might make it a solid alternative to the XPS 15 or the (more expensive) ThinkPad X1 Extreme, though the number pad could be make-or-break depending on user workflow. Remember that with the new Yoga naming scheme, a “C” means it’s a convertible while an “S” means it’s a traditional clamshell design.

On the other hand, if you’re on a middling budget and still want a 15-inch convertible with some sort of dGPU, the Yoga C740 15 might be the one for you, as a direct follow-up for last year’s Yoga 730, with Core U hardware and GTX 1650 graphics.

We’ll follow up on all these options once we get them for reviews, so stay tuned for updates.

That aside, I’m a bit skeptical of whether “AI” is really going to improve cooling performance in a laptop (as Gigabyte made similar claims with their previous Aero 15 model) but I’ll reserve judgment until they can be tested.  As for Modern Standby and any sort of “smart” assistant on a laptop, that is down to personal taste. For myself, I would not want anything like that in my home — but hey, these things must be selling to some people or they’d stop making them.

For complete information on the updated product line-up from Lenovo including the C640, 740, 940, and S740 laptops, ThinkBook 14 & 15, ThinkVision monitors, and Smart Tab (smart-home devices),  you can find the rest of the details on their main website.