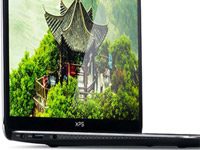 The Dell XPS 13 is and has been one of the most appreciated 13.3 inch ultrabooks available in stores. And for several good reasons: it looks awesome, is solid built, powerful and more compact than the average 13.3 incher in its class.

Besides what’s obvious from the specs, the XPS 13 has some other aces down its sleeves, like the comfortable backlit keyboard, the accurate trackpad and the fact that it manages to run cool and quiet, something not all ultrabooks can brag about.

There are of course some aspects where the XPS 13 used to come short: the limited amount of ports (the Ethernet slot and even the card-reader are missing), the slightly below average battery life and the rather poor screen. Luckily, you can cross that last one off the list, as the Dell XPS is now available with a Full HD 1920 x 1080 px IPS panel.

And yes, a Full HD 13.3 inch panel will make the content and texts look rather cramped in Windows, but it’s still better than having to deal with that pesky 720p resolution.

However, while you might be happy to hear about the upgrade, you should know that Dell only offers the new screen on their high end configurations. That means that the cheaper option you can pick will set you back $1400, given that’s a Core i5-3337U configuration, with 8 GB of RAM and a 256 GB SSD. Add $200 on top and you’ll be able to buy the Core i7-3537U config.

If it’s any consolation, for those of you on a tighter budget, the XPS 13 is still selling with the older 720p screen, starting at $999,.

Those being said, I’m happy to see Dell offering higher density screens on their main ultrabook, but I fail to see the logic between pairing it with a large SSD and automatically driving the prices high. Too high for the average ultrabook buyer if you’ll ask me…

The IPS display is only available on the top configs though, starting at $1400

Anyway, I’d like to know what do you guys think about this approach. Would you buy a top Dell XPS 13 for $1400 or would rather go for some of the other cheaper 13.3 inchers with Full HD screens available in stores (like the Acer S7 or the Zenbook UX31A)?

Disclaimer: Our content is reader-supported. If you buy through some of the links on our site, we may earn a commission. Learn more.
Andrei Girbea, Editor-in-Chief of Ultrabookreview.com. I've been covering mobile computers since the 2000s and you'll mostly find reviews and thorough guides written by me here on the site.
← Previous Story HP Spectre XT PRO review – one of the best ultrabooks out there
Next Story → Asus Zenbook UX32A review – the most affordable Asus ultrabook