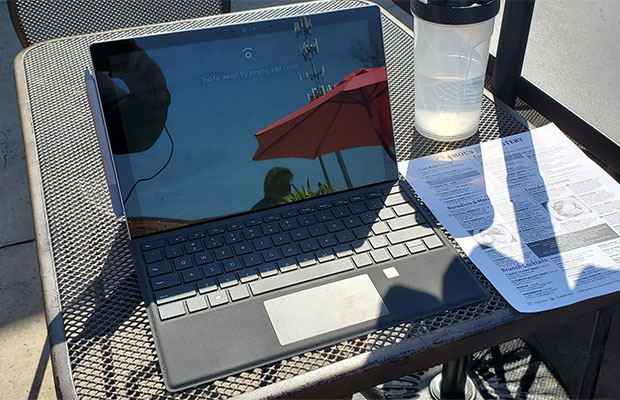 Microsoft has been dropping prices on its Surface lineup over the last few months, with the cheapest Surface Pro 7 tablet + keyboard bundle now available for just $599 (which also means prices are dropping elsewhere).

Even with the Surface Pro 8 now available, this Surface Pro 7 is still a competitive offer, and with over seven iterations to the Surface line of 2-in-1 PCs, that means it should be a highly polished piece of kit well worth the price premium. So is it worth it at this lower price point?

I’ve been using an i5/8GB/256GB Surface Pro 7 with keyboard and Surface Pen for the past few days, and in this article, I’ll share my thoughts on it.

Update: In the meantime, Microsoft has updated the Surface lineups with the Surface Pro 8 model discussed here.

It just so happens that one of the first PCs I reviewed for UltrabookReview was the Surface 3. It’s hard to believe a Surface shipped with only 2GB of RAM and an Atom CPU looking at today’s technical requirements, but back in 2015, it was almost enough to get you through most basic tasks with Windows 8.1. I eventually sold off the Surface 3 mostly due to its paltry 2GB of RAM making almost any task unnecessarily painful, but I loved the fact that it was so portable and light. With so many generations of Surface 2-in-1s since then, I thought it was time to check back in on Microsoft’s Surface line and see how they’re doing.

My first impression of the Surface Pro 7 was that not much had changed. Visually, it looks very much like all its predecessors. While it did get a USB-C port (no, no Thunderbolt 3 still, because Microsoft) and a Windows Hello IR camera + fingerprint scanner (on the keyboard), the bezels are still the same chunky size, which gives the Pro 7 a rather “old-school” appearance compared to the ARM-powered Surface Pro X. But, on the inside, the Surface Pro 7 packs an Intel 10th generation “Ice Lake” 10nm i5-1035G4 CPU with an Iris Plus integration GPU, 8GB of DDR4 RAM, and a 256 GB SSD. With these improvements, did Microsoft finally manage to make the perfect ultraportable computing device?

Unfortunately, they didn’t make nearly as much progress as I’d hoped. This isn’t a full review, so I’ll try to get through the biggest pros and cons in an expedient fashion.

On the good side, the Surface Pro 7 has a beautiful QHD+ screen, it’s light, and typing on the keyboard folio is still excellent. The Windows Hello IR Camera works great, and it didn’t have any issues running my standard office workload of Vivaldi, Slack, Discord, and Word.

The Ice Lake i5 and 8GB of RAM are perfectly suitable for such a workload. In terms of tablet-mode, the Surface Pen is a great bit of tech that magnetically snaps to the side of the tablet and integrates very well with Microsoft’s office suite, allowing one to mark-up, draw, or otherwise doodle on documents in a way that adds the mark-up as an overlaid image for compatibility.

It’s not something I used over just commenting in Word as I’ve always done, but it’s cool. Finally, you can now “Swype” with your finger across the keys of the onscreen keyboard in Windows, so it’s now almost as functional as Swyping with your thumb on your phone. All in all, the Surface Pro 7 is more usable than ever in tablet mode (but it’s still far behind PC mode).

So now we can talk about what’s not cool. For starters, the Surface Pro 7 in sunlight, apparently:

So much for “Ice Lake”. This happened after about 30 minutes of use outdoors in 15C/59F weather.

After using the Surface Pro 7 outside for about 30 minutes, it started chugging and becoming unresponsive. I tried to close my browser, but it just wouldn’t respond to input, though it continued streaming music and letting me type. About 4 minutes later, it shut down and gave me the above temperature warning. I felt the tablet and it was indeed quite hot — but why? The tablet is silver, but the large front bezels are black. Could this be why? I’ve never had an issue with my black carbon fiber XPS 15 outside. Then I remembered that the Surface Pro 7 is fanless in this i5 version… yeah, that will do it. So, fine, don’t use your tablet outside in the sun, I guess.

But there’s a much bigger issue with the Surface Pro 7: the battery life, or lack thereof. Despite asking for advice on Reddit and tweaking everything I could, running Firefox, Word, Slack, and Teams gave me barely over 4 hours of usage. Less than half a work day. Yet, Microsoft has the balls to claim 8-10.5 hours on their website. But, if you take a closer look at their claims…:

[1] Battery life; Surface Pro 7: Up to 10.5 hours of battery life based on typical Surface device usage. Testing conducted by Microsoft in September 2019 using preproduction software and preproduction Intel® Core™ i5, 256GB, 8 GB RAM device. Testing consisted of full battery discharge with a mixture of active use and modern standby.

Up to 10.5 hours “with a mixture of active use and modern standby”. So, maybe Microsoft let it idle for 5.5 hours and then left it in active standby for 5 more hours? Very cheeky, guys. The unfortunate fact is that this isn’t a new problem for the Surface Pro lineup, either. A websearch for “surface pro 7 battery life” reveals that poor battery life has been a running issue with the Pro line, and the Pro 7 seem to offer worse battery life than its predecessors (anecdotally, anyway). I shudder to think how poorly the i7 would fare.

I tried to tweak everything I could by debloating Windows, running at a slightly decreased resolution so the iGPU wouldn’t need to work so hard, switch from Vivaldi to Firefox for mobile, and quit apps that weren’t mission critical, like Discord. I tried to undervolt as well, but unfortunately, Intel/Microsoft have taken that away from us with Ice Lake in the SP7. You can’t disable Modern Standby or tweak more power options, either, as of the 2004 Windows Update. If I leave it totally idle, I could get 10 hours of SoT, but the moment I start actually using it, that number drops and drops. I’ve come to terms with the fact that I’m just not going to get more than half a day of work done on this thing.

Yes, I could bring the power brick or a smaller USB-C charger, but what’s the point in having a 2-in-1 if you’re tied down? The honest marketing copy for the Surface Pro 7 should have been like this: 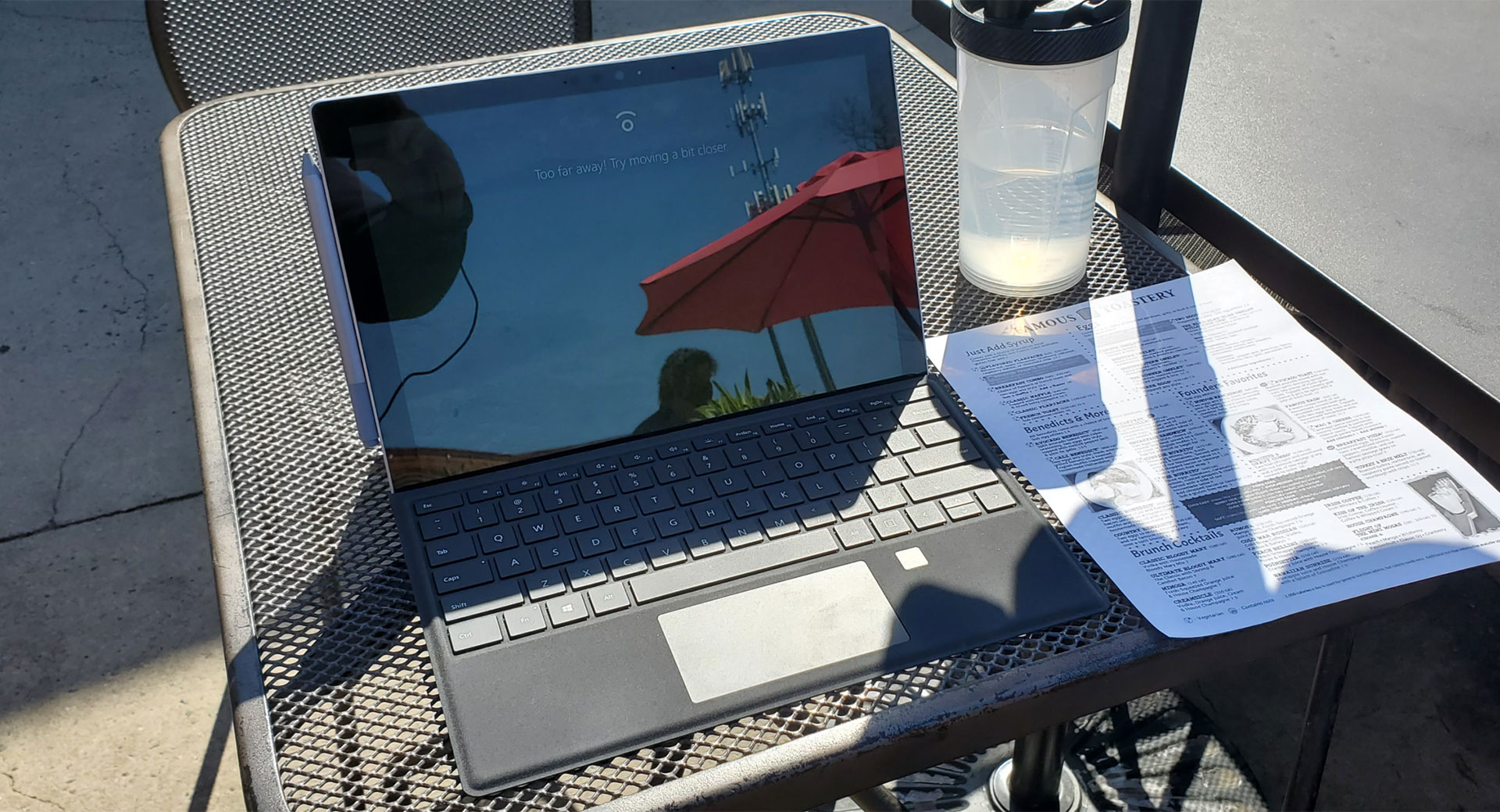 Introducing the new Surface Pro 7. Get your work done anywhere.* **
*As long as it’s not in the sun
** And can be done within 4 hours

Battery life and overheating outside are by far my biggest gripes, but there’s a few more annoyances that I feel should be mentioned for anyone thinking of trying a 2-in-1 like the Surface for the first time. It’s always been very uncomfortable to use the surface pro on your lap in laptop mode, and that still hasn’t changed with time. The fact that the 2-in-1 form factor requires so much depth of space counts against it in a major way for its target demographic of “road warriors”. However, folding the keyboard underneath the surface and propping it up that way with an onscreen keyboard/touch is better than it used to be now that we can “Swype” from one key to the next rather than pecking.

While we’re talking about the keyboard, the fingerprint sensor is quite slow and painful to use, and while it’s better than nothing, it reminds me of the old “strip” fingerprint sensors from 2010 in terms of its functionality.

Performance of ice lake is adequate for basic workloads one might use, but on the few occasions you need sustained performance (doing lots of installs when you first get it, for example), it slows down noticeably.

Lastly, I think 12.3″ is a bit small these days, honestly. I would like to see a more “professional” Surface Pro one day that brings back active cooling, gives us a 14″+ screen, and actually hits 8+ hours of battery life. When that happens, maybe I’ll give the SP lineup another go. For now, this one is going up on eBay.

If interested, these articles go over a couple of other small-screen mini laptops, while this one goes over a selection of the best budget ultrabooks and laptops that you can find in stores these days.

What do you think about the Surface Pro as a series? Do you have a Surface Pro 7 and swear by it, or did you have similar gripes to me? Let us know in the comments.

Disclaimer: Our content is reader-supported. If you buy through some of the links on our site, we may earn a commission. Learn more.
Douglas Black is a Technical Writer, Analyst, Teacher, and DJ currently based in North Carolina.
← Previous Story Asus TUF Gaming A15 FA506QM (R7 5800H, RTX 3060) vs F15 FX506HM (i7-11800H, RTX 3060) review comparison
Next Story → Lenovo ThinkPad X1 Nano ultrabook review (Core i7, 16:10 matte screen)