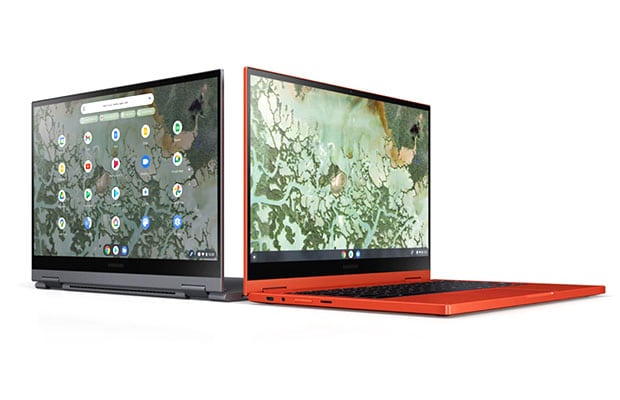 Samsung has launched the new Galaxy Chromebook 2, the first Chromebook on the market with a QLED screen. This will be available in stores in the US by the end of March, for a base price of $550.

The new model follows up on the 2020 Samsung Galaxy Chromebook, one of the most appreciated high-tier Chromebooks of its generation.

Samsung was one of the first manufacturers to embrace the Chromebook concept introduced by Google in 2011. Over the past decade, the South Korean manufacturer has built a good reputation in this segment, which has been consolidated last year with the launch of the Galaxy Chromebook convertible model, a model with premium aspirations and a premium price: $1000.

The updated 2021 Galaxy Chromebook 2 comes with the promise of improving on last year’s recipe, proposing a novelty in the segment and a more affordable price. The new model stands out with a thickness of only 0.55” (or 13.9 mm), which makes it suitable for mobility, especially since it only weighs 2.71 lbs (or 1.2 kg).

The Galaxy Chromebook 2 is also the first Chromebook on the market available with a QLED screen. The technology was first developed by Samsung for Smart TVs and offers several advantages over the standard screens already available on Chromebooks: colors are more saturated colors than on IPS screens, with excellent viewing angles and fine blacks. These traits are normally found on OLED screens, but with the QLED the difference is made by the price and the fact that the technology is more prone to burnin: the production costs for QLED screens are lower compared to OLED screens. Panel aside, the screen is 13.3”, offers touch input and pen support, but this is sold separately.

This aside, Samsung promises an improved audio experience for the Chromebook 2 thanks to the two powerful 5W speakers. Those who prefer to listen to music on headphones can use the classic 3.5 mm jack. Also worth mentioning is the presence of two USB-C ports, a microSD card reader and a 720p webcam.

The hardware platform used by the Galaxy Chromebook 2 is rather typical for this segment. The basic version is built on an Intel Celeron 5205U CPU with a frequency of 1.9 GHz, 4 GB of RAM, and a 64 GB eMMC. There’s a more capable configuration powered by an  Intel Core i3-10110U CPU with a base frequency of 2.1 GHz, that can reach up to 4.1 GHz in Turbo mode. This will be paired with 8 GB of RAM and 128 GB of storage space.

Interestingly enough, even the higher-end ChromeBook 2 version is a downgrade in performance from its predecessor, which was built on an Intel Core i5-10210U CPU, with 8 GB of RAM and 256 GB for the SSD.

The Chromebook 2 has a 45.5 Wh battery. Based on the technical specifications announced by Samsung, it should offer a decent life for this segment. However, we cannot be sure of this particular thing, because the previous Galaxy Chromebook had modest battery life due to the 4K OLED screen and the 15 W processor. Shortly after the launch, users complained that the autonomy reached only 6 hours with the brightness set at 50%, or only 4 hours with a 60% to 70% brightness. Far too little compared to the 10-hour battery life that Samsung promised at launch.

However, I expect improved battery life on the Gallaxy Chromebook 2, thanks to the lower-resolution screen and QLED panel, as well as the less-demanding power requirements of the Intel Celeron processor on the base configuration. Nonetheless, make sure to read reviews before making the final decision, to avoid unpleasant surprises.

On US soil, the Samsung Galaxy Chromebook 2 will be available starting from the first quarter of this year in Fiesta Red and Mercury Gray colors. The base version with the Celeron 5205U CPU will cost $550, while the higher version with Intel Core i3 will be available for $700. Customers who register on the Samsung website and place a pre-order will get a $80 discount.

With the new Galaxy Chromebook 2, Samsung remains a competitor in the premium Chromebook segment, but at the same time, is more accessible for a broader audience.

The previous generation was $1,000 at launch, while the most expensive v2 version sells for $700, significantly less.

The best-known rival on the US market is the Google Pixelbook Go, which is a tablet and not a 2-in-1 convertible, but comes with an Intel Core i5 CPU, 8 GB of RAM and 64GB of storage space for $650 and sometimes less, with occasional discounts.

Follow this link for a more ample selection of premium Chromebooks in the same budget as this Samsung Galaxy ChromeBook 2, and let me know what you think about this 2021 update in the comments section down below.

Disclaimer: Our content is reader-supported. If you buy through some of the links on our site, we may earn a commission. Learn more.
← Previous Story Huawei Matebook X review (fanless Intel Core, 3:2 display)
Next Story → Lenovo ThinkPad X1 Titanium Yoga 2021 – 3:2 display in a premium convertible ThinkPad