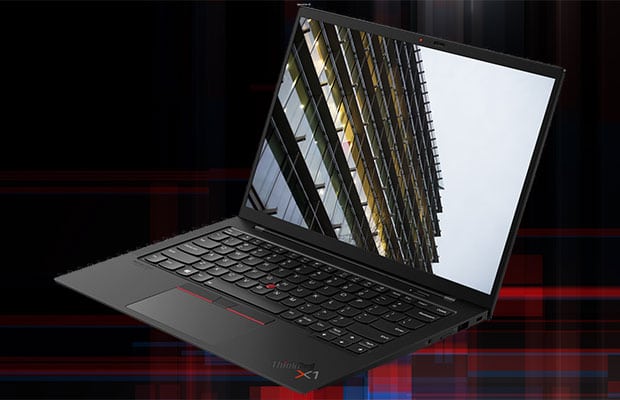 For the first time in recent years, I’m truly excited about the updated 2021 ThinkPad X1 Carbon (gen 9) and X1 Yoga (gen 6), as these greatly improve on the previous generations across a couple of different important fields.

Lenovo kept to mostly updating the hardware specs between the 2019 to 2020 models, but this time around, the 2021 lineups are no longer merely a hardware bump to the latest Intel platform (11th gen Tiger Lake with vPro), but also an external and internal redesign that translated into 16:10 displays finally making on these chassis, updated inputs, and an updated internal design that includes a dual-fan thermal module and a larger 57 Wh battery.

The limited single-fan thermal design, paired with Lenovo’s very quiet fan-profiles, have been a culprit of the previous X1 Carbon/X1 Yoga generations, which were often outmatched by the competition with taxing chores. Hopefully, that will no longer be the case with the 2021 updates, yet it’s too early to tell, you’ll have to wait for the reviews for our in-depth impressions.

As for the 16:10 screens, larger clickpad, larger battery, updated Evo-certified hardware, and improved speakers/mics, many of these are welcomed changes meant to bring these top-tier ThinkPad ultraportables up-to-date with today’s demands, without sacrificing on the design, IO, features or the configurability (and hopefully reliability and customer service) that ThinkPad customers expect.

We’ll get in-depth on these 2021 models down below.

As I’m sure you’re already aware, the X1 Carbon is Lenovo’s highest-tier clamshell ThinkPad ultraportable, with a 180-degree screen available in either matte or touch assortments, and a multitude of different panel choices.

The 2021 X1 Carbon is their 9th iteration of the series, which continues to build around a couple of unchanged fundamentals: the clean and sober ThinkPad design lines, a lightweight, slim and sturdy chassis made out of metallic alloys, uncompromised IO and connectivity, the latest hardware specs available for this format, long-battery life, and a multitude of configurations and warranty options, backed up by a wide range of accessories such as docks, headphones, mice, etc.

Compared to the 2020 model, the 2021 is marginally smaller and heavier. The major differences are in the now 11% increased screen size with smaller bezels, a more spacious clickpad, the speakers flanking the keyboard on the left/right, a quad-array of microphones for video calls, and the power-button now integrating a finger-sensor. This aside, the thermal module no longer blows the hot air on the right side, but through vents placed under the screen, between the hinges, and includes two fans.

I don’t have the exact details on this updated cooling module, but based on the X1 Yoga images, I expect an approach with the fans grouped together on one side and the CPU connected right next, which might not be as capable as the dual-fan flanking the components on each side approach that most OEMs use in this segment these days. We’ll see. 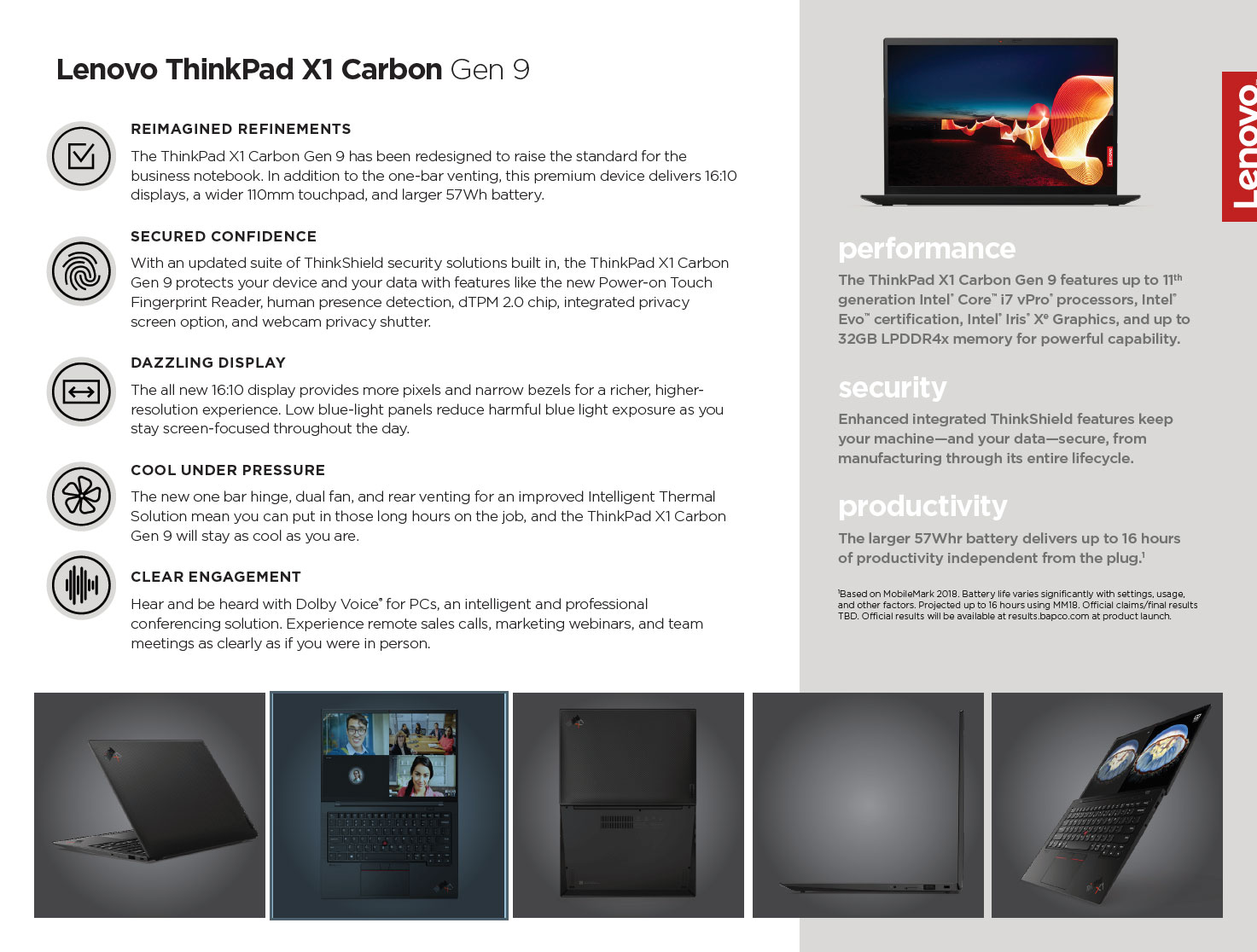 The internal redesign also translated into space for a larger battery inside (57 Wh, vs 51 Wh in the previous model), and an IO rearrangement on the sides. There’s no longer that standard docking port on the left, which has been replaced by a traditional USB-C with Thunderbolt 4, so the series is only compatible with Thunderbolt docks now. Optional 4G LTE or 5G connectivity is configurable on the 2021 X1 Carbon as well.

The design and choice in materials haven’t changed much, though, with black metals used for the entire construction and an optional woven carbon-fiber exterior for those willing to pay extra for it. More recent reports suggest that the keyboard has been updated this generation and is closer to the keyboard on the ThinkPad X1 Nano, with an increased 1.5 mm travel distance, compared to 1.3 mm travel on the previous models. Looking forward to testing this out in real life and see how I feel about it.

Back to those screen options, Lenovo offers a multitude of FHD+ panel choices, from matte to touch to Low-Power to ePrivacy, as well as a UHD+ screen with 100% DCI-P3 color coverage as the top option. They’re all 16:10.

As for the hardware changes, Intel’s 11th gen Tiger Lake U hardware powers the X1 Carbon series, with 4C/8T processors and Iris Xe graphics. Based on our reviews and experience with the Tiger Lake hardware, I’m expecting a higher-power implementation here, hopefully around 22-25W sustained with the updated thermal design, which ensures snappy everyday performance, middling multi-threaded abilities, and some light-gaming potential, especially on the i7 configurations. Don’t expect to run AAA titles, but older and casual games should run at 30-60 fps with mid details. 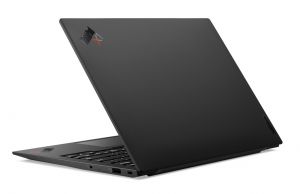 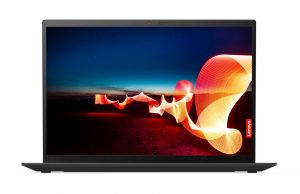 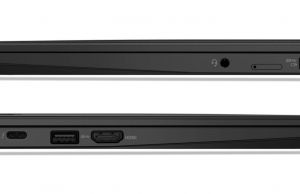 As for the elephant in the room, no, there’s still no AMD-based configuration of X1 Carbon, which remains an Intel exclusive. You can get Ryzen Pro configurations on the ThinkPad 14s, though, which we’ve reviewed over here.

With the bump to Tiger Lake, the 2021 X1 Carbon also gets faster and efficient LPDDR4x 4266 MHz memory, soldered and configurable up to 32 GBs, twice the amount previously available. Storage is still limited at a single M.2 drive, up to 2TB PCIe x4.

All in all, I’m looking forward to reviewing this 9th gen of the X1 Carbon and see how its fares against the available competition. It’s scheduled for launch around February 2021, starting at $1429 MSRP.

The ThinkPad X1 Yoga is the X1 Carbon’s 360-degree 2-in-1 convertible and slightly more expensive sidekick.

The two are similar in many ways, built on the same barebone and specs. However, the X1 Yoga is entirely made out of aluminum, and not the same kind of lighter alloys used for the X1 Carbon, thus it’s a fair bit heavier. It also looks different, with a dark gray color (with a tone-matched keyboard), as opposed to the black of the X1 Carbon, is marginally larger, and includes a pen that can be holstered into the laptop. 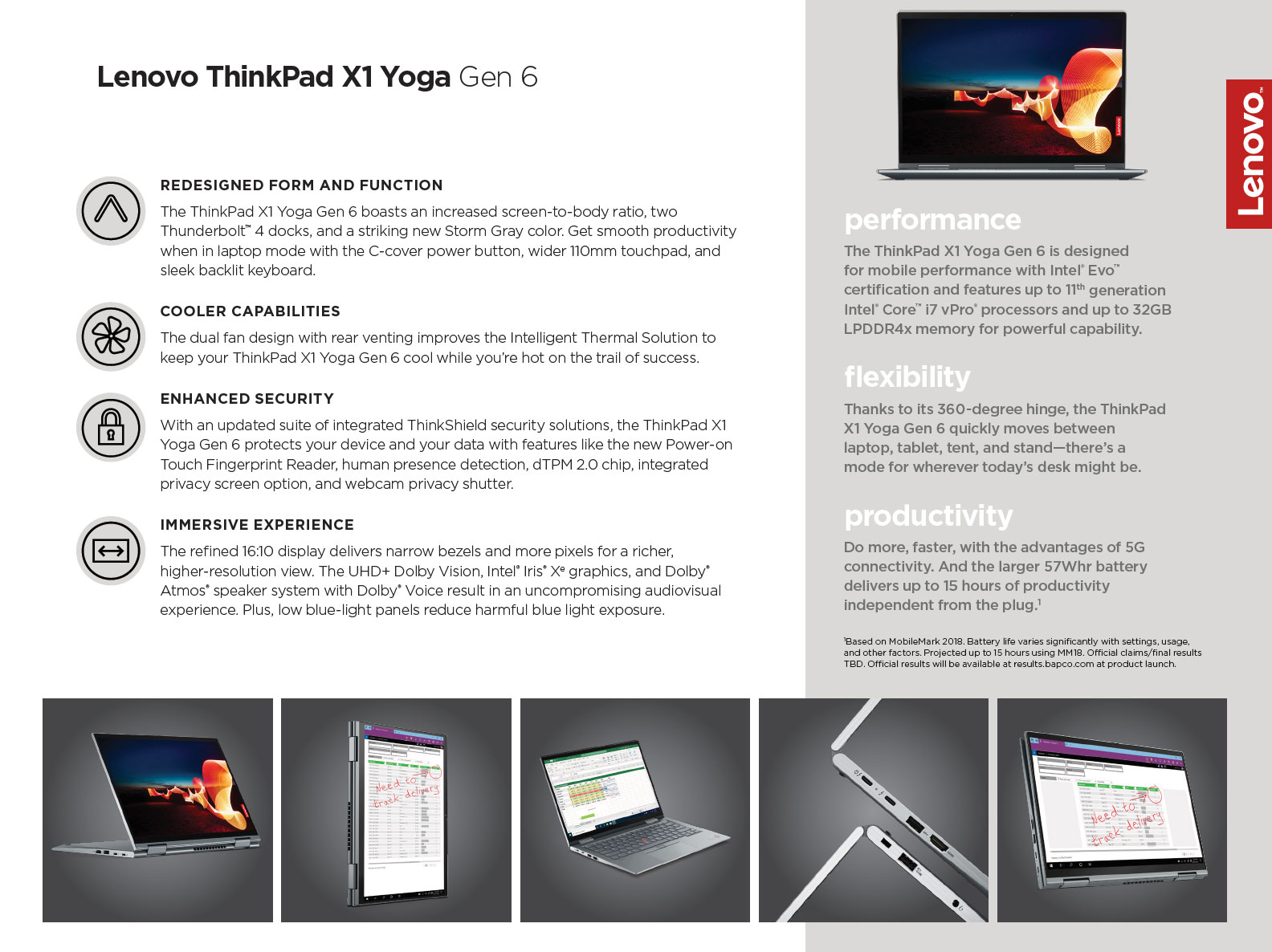 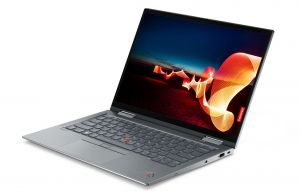 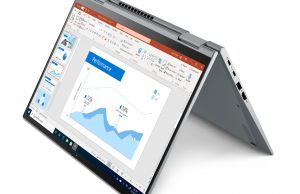 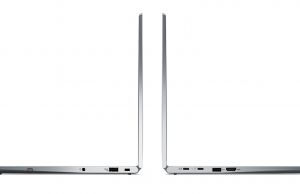 The X1 Carbon is by far the more popular option among these two, but if you do care about the pen-functionality and the 360-degrees screen, and you’re also willing to pay extra for what is arguably a less portable notebook, the X1 Yoga could be for you.

I’ll also add that Lenovo mentions dual-fan cooling for the X1 Yoga as well, and the available images allow us to better estimate the thermal design.

I expect the two fans to be grouped together and pull the heat from the CPU positioned right next, through a single heatpipe, the same design Dell used on their older XPS 13 7390 models, but which they’ve steered away from in recent years. I’m curious about the results within this sort of thin aluminum notebook.

Anyway, look for our reviews in the months to come, as the X1 Yoga should be available in stores around February 2021, starting at $1569 MSRP in North America.

Disclaimer: Our content is reader-supported. If you buy through some of the links on our site, we may earn a commission. Learn more.
Andrei Girbea, Editor-in-Chief of Ultrabookreview.com. I've been covering mobile computers since the 2000s and you'll mostly find reviews and thorough guides written by me here on the site.
← Previous Story 2021 HP Envy 14 – mid-tier ultrabook with 16:10 screen and GTX graphics
Next Story → Asus ZenBook Duo 14 UX482 review (2021 UX482EA model)