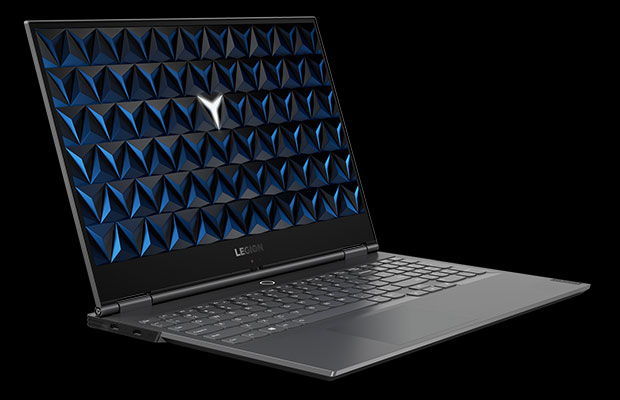 Lenovo makes some of the most competitive gaming laptops of the moment as part of their Legion line, with devices like the high-tier Legion Y740 and the mid-range Legion Y540.

What they don’t make is a gaming ultrabook, a thin-and-light performance laptop that can tackle the likes of the Asus ROG Zephyrus, MSI GS65 Stealth Thin or the Razer Blade 15.

Update: Lenovo have updated their naming scheme and this one is now called the Legion 740Si, and not Y740S are already announced. That i at the end is reserved for all the 10th-gen Intel-based Legion models.

That’s what I expected their brand new Legion 740S would be when I first heard about it. But it’s not, because it lacks any sort of dedicated graphics. Yes, that’s right, the Legion Y740Si is a “gaming laptop” with integrated Intel graphics and a 60 Hz screen. How come, you will ask?

Well, Lenovo expects potential buyers to hook this up to their BoostStation eGPU enclosure and a fast external gaming monitor when playing games, while the laptop would remain compact, light and snappy with everyday use. There’s no doubt the gaming experience is better with those hooked up, and also no doubt that a smaller and lighter computer is nicer to carry around to work or school.

At the same time, though, the Legion Y740Si should not be called a “gaming laptop”, but rather what it is: a fast 15-inch ultrabook with an unusual specs mix and middling battery life.

Have a look at the specs sheet below, we’ve pitched the Y740Si against the popular Y740 for a big picture of what sets the two apart.

The Legion Y740Si is smaller, thinner and lighter than the full-power Y740. It does borrow its design language from the Y740, but also from the more recent Lenovo Y7000 series. Nonetheless, it’s nicely built and good looking, with dark-gray pieces of metal used for the interior and lid-cover, much like on the existing Y740.

However, with the loss in size also comes a small loss in features. The Y740Si relies heavily on the USB-C (with Thunderbolt 3) ports for data transfer, charging and video output, but also gets an SD card reader, which the thicker Y740 lacks. Oh, and a fingerprint reader as well, integrated within the Power Button. Which btw, is placed just underneath the screen and seems to have an always-on glowing LED that’s going to drive you crazy when watching movies in a dark room, just like on Lenovo’s own ThinkBook 13s. Hopefully, there’s some way to shut it off.

The Legion Y740Si is otherwise clean and neat, with the only other light being nicely concealed within the O in the LEGION brandings on the lid-cover, and none of the RGB mambo jumbo of the full-size Y740. Applauses! 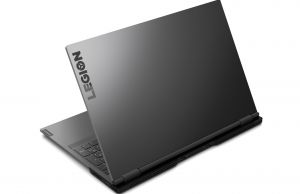 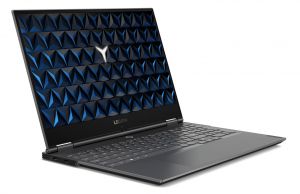 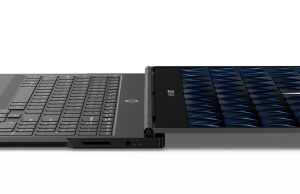 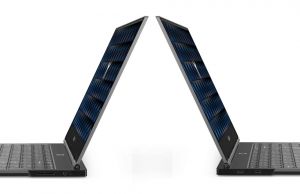 This ultraportable version also gets a redesigned keyboard. RGB illumination seems to no longer be on the menu, and nor is the column of Macro keys to the right side of the main deck, but a NumPad section has been implemented instead.

I reckon this keyboard should also feel a lot different in real-use, with shorter strokes and quicker feedback, but we’ll have to get our hands on it before we can draw any conclusions. I never got along with the keyboard on the Legion Y740, so hopefully, this iteration is an upgrade. Finally, I’ll also add that Lenovo made sure to implement anti-ghosting technologies here, and a new type of coating that won’t wear off as easily as on the previous Legions.

The elephants in the room: no dGPU and only 60 Hz screens

But let’s touch on the three major characteristics that make the Legion Y740 different than the other gaming ultraportables of the moment, and could, at the same time, kill it for many potential buyers.

First of all, Lenovo opted for an all-Intel hardware platform, with the soon to be launched 10th gen Core-H processors and dedicated graphics. I don’t have details on the exact implementations, but perhaps they opted for something with some sort of Iris graphics, similar to the Intel UHD Gen11 bundled on the Core U IceLake platforms. That would at least allow the Legion Y740Si to play eSports titles at low details, like LOL, CS:GO or Fortnite.

What we do know is that Lenovo took the job of cooling a Core H processor inside a thin profile seriously, and they created a complex thermal module with Vapor Chamber cooling and quad-fans. I’m a bit concerned that four small fans could translate in high-pitch noise levels when running demanding loads, but hopefully, that’s not the case. Look for our detailed review for more on this cooling solution.

Nonetheless, the Y740Si is primarily meant to game when hooked up to an external GPU enclosure and monitor via Thunderbolt. Unsurprisingly, Lenovo also announced the Booststation eGPU and a 25″ 240Hz IPS Legion Y25-25 monitor alongside the notebook. 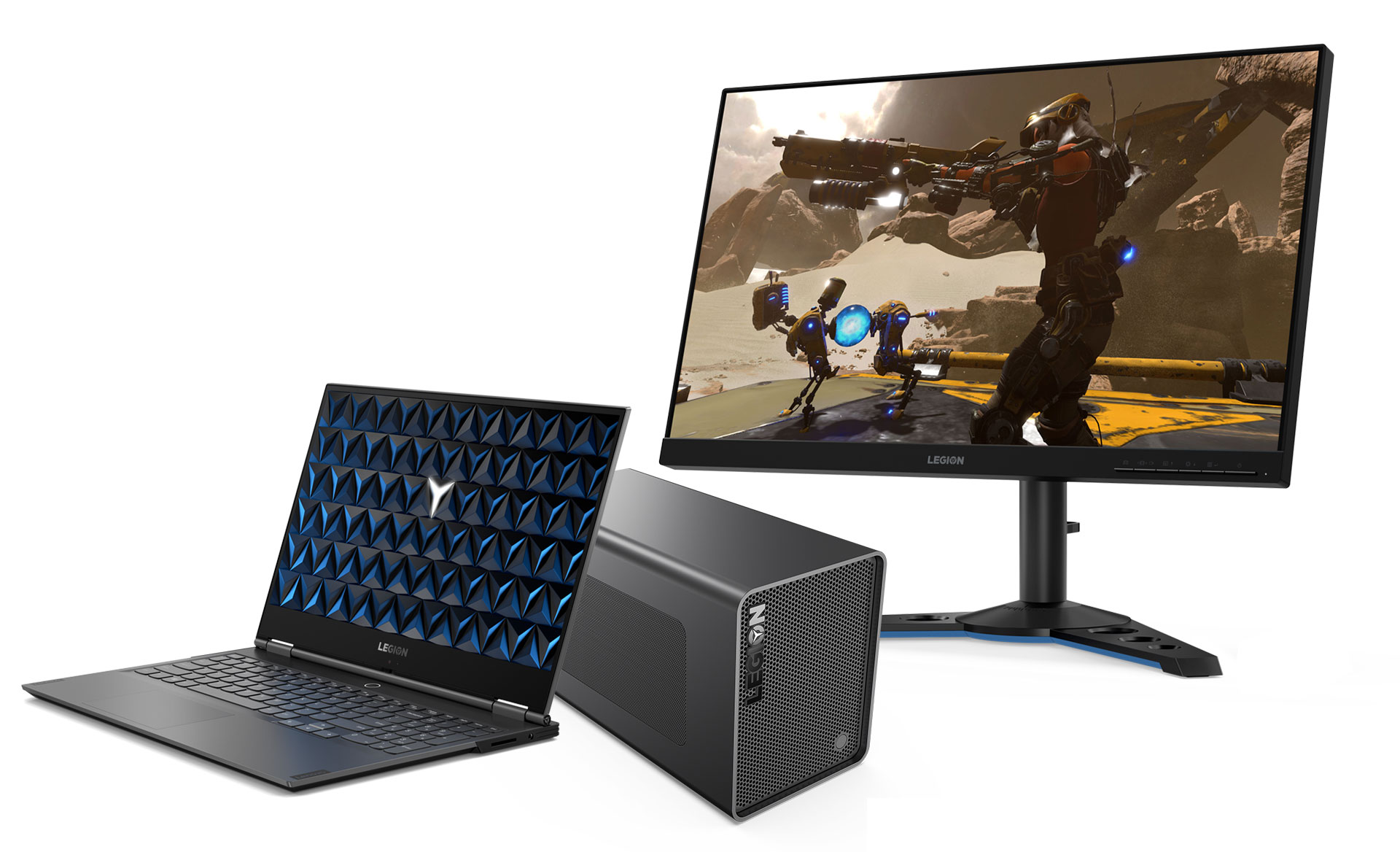 On top of that, the specs sheet also mentions 72% sRGB coverage for the FHD panel, which I hope is a mistake, as would otherwise translate in muddy washed-out colors. The UHD screen, on the other hand, sounds like a good choice, but would further eat into the already limited battery life.

The size of the battery is my third major gripe with this laptop. Lenovo only found enough room inside for a 60 Wh battery, which is what you can get on premium 13 and 14-inch models. In comparison, alternative performance ultraportables offer 76 to 94 Wh batteries (and a dGPU and the cooling to keep both at bay). Paired with a Core H platform, I wouldn’t realistically expect more than 3-5 hours of real-life use on this Legion Y740s, and perhaps 6-7 hours of streaming.

We’ll update once we know more about the exact SKUs and hardware configurations.

From where I’m standing, the Legion Y740S makes the most sense as the brains of that eGPU and 240 Hz monitor setup, while being a powerful work/school computer throughout the day. A highly specced configuration with the UHD screen would perhaps best cater to those needs, but it would also have to be priced competitively in order to compete with the existing gaming ultraportables that include a dGPU.

Right now, GTX 1660Ti variants of most thin-and-light alternatives are available for around $1500, with FHD fast-refresh screens and larger batteries. Not the mention that some of them are even lighter and smaller than this Y740S, like the MSI GS65 Stealth.

Ideally, I wish Lenovo would have put a bigger battery and a better quality FHD screen on this notebook. Perhaps even a 144 Hz option, which could have clocked to 60 Hz to save battery while using the laptop unplugged. These would have made the Legion Y740S a better 15-inch ultrabook for everyday use, school and work, while allowing to play games on its internal screen without the need for an external monitor. Yes, performance would have taken a hit, but at least it would have given users a choice and not force them to buy an external monitor as well.

As it is, I feel that the Legion Y740S needs to be very aggressively priced to make sense in today’s market, and even if that happens, it’s still a peculiar mix that many potential buyers might not adhere to.

Of course, we need to spend more time with this product before drawing any conclusions. Hopefully, the FHD screen and efficiency turn out to be better than the specs suggest, and hopefully, Lenovo aced the typing experience and thermal module to compensate for some of the quirks.

Expect many updates on the Lenovo Legion Y740S in the months to come, and in the meantime, we’re looking for your thoughts and feedback in the comments section below.

Disclaimer: Our content is reader-supported. If you buy through some of the links on our site, we may earn a commission. Learn more.
Andrei Girbea, Editor-in-Chief. I've been covering mobile computers since the 2000s and you'll mostly find reviews and thorough guides written by me here on the site.
← Previous Story Intel Core i7-10750H, i9-10880H and i5-10300H Comet Lake-H – early benchmarks
Next Story → Asus TUF Gaming A17 FA706 (17-inch) vs A15 FA506 (15-inch) comparison