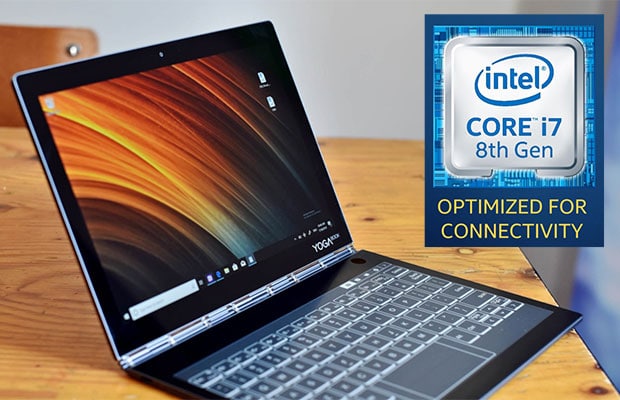 Intel rolled out the updated Amber Lake Core Y hardware platform in early-September 2018 and this spurred a handful of modern and fanless thin-and-light laptops during the reminding of 2018 and most of 2019, up until a next-gen iteration based on the Cannon Lake 10 nm platform will be eventually launched.

In this article we’ll tell you what to expect from the Amber Lake-Y hardware platform, how it compares to the previous Core Y generation and the current Whiskey Lake-U higher-performance hardware, as well as provide a detailed list of all the available ultra-portable laptops and ultrabooks built on Amber Lake-Y CPUs.

Core Y platforms include Core m3, i5 and i7 low-power CPUs with reduced energy requirements. They’re suited for the thinnest and lightest tablets and notebooks out there, but they’re nowhere near as powerful as the existing Core U platforms. As a result, Core Y devices can handle everyday basic activities fine (browsing, movies, text editing, music, etc), but multitasking and demanding loads are out of their league.

Regardless, while performance is not this platform’s selling point, Amber Lake devices have a few other aces down their sleeves: they’re completely quiet (since they are passively cooled, there’s no fan inside, and they rely solely on SSDs for storage), run for a longtime on each charge and are smaller and lighter than even the most portable Core U devices out there.

But let’s get back to the hardware. The updated Intel Amber Lake-Y platform is based on a refined 14++ nm build-process and is an incremental update of the previous 7th gen KabyLake Core Y line. Details below.

The 8th gen Core Y CPUs are able to reach higher Turbo Boost frequencies than the previous 7th gen options. Most modern processors have a default CPU Base Frequency, but run at Turbo frequencies most of the time when performing tasks that require increased power. However, running at higher clock speeds requires extra energy and thus produces extra heat, and the trick is to keep the components as cool as possible, in order to balance temperatures and performance. That’s easier said than done, as Core Y computers are usually compact, thin, and also passively cooled.

At the end of the day, not all Amber Lake-Y devices are going to perform the same, and Intel allows the OEMs to set TDPs between 3.5 and 8 W for each implementation. The higher the threshold, the higher the performance and thus the heat. That’s why I advise you to look into proper reviews that analyze performance in order to find-out what to expect from each unit, what it can chew and what it can’t.

You should also consider the fact that just like with the 2018/2019 Whiskey Lake updates, Amber Lake ultraportables are in most cases completely new devices, with updated designs, form-factors and features that you might not otherwise find in older Core Y builds or in other hardware brackets.

Below we’ve gathered a detailed list of all the existing Amber Lake laptops and tablets. We’ve split it in two sections: ultraportables with 12-inch or smaller screens, and mid-sized laptops with 13+ inch displays. It’s short for now, but we’ll update it as new devices are announced.

You should follow the links on each product’s name for our indepth articles and reviews, as well as the links in the Price column for up-to-date configurations and prices at the time you’re reading the article.

And here’s a list of the larger options with a 13-inch or larger screens. They’re still fanless, thin and light, but add an increased work-space area, as well as potentially improved performance, keyboards, IO and larger batteries.

We’re constantly keeping an eye for new launches and updating the list, but there’s still a fair chance we might miss something, thus if you spot any Amber Lake based device that should be in here and is not, or any mistake with our listings, please get in touch in the comments section below.

Disclaimer: Our content is reader-supported. If you buy through some of the links on our site, we may earn a commission. Learn more.
Andrei Girbea, Editor-in-Chief of Ultrabookreview.com. I've been covering mobile computers since the 2000s and you'll mostly find reviews and thorough guides written by me here on the site.
← Previous Story How to calibrate your laptop’s battery and fix inaccurate wear info
Next Story → Intel Whiskey Lake-U laptops (i7-8565U / i5-8265U) – the complete list and what to expect