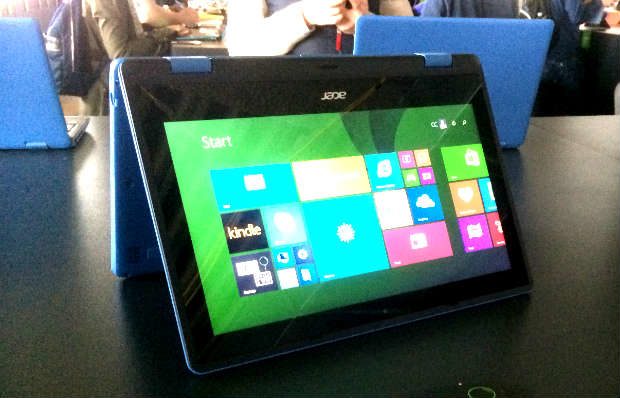 Acer already had a few cheap 2-in-1s available in stores, but later this year we’re going to see some more.

Among them we’ll find the newly launched Acer Aspire R 11, an 11-inch convertible with a Yoga-like form factor. Acer decided to go for an established mechanism and drop the experiments they pushed with the previous Aspire R laptops (the R 13 or the R 15), a decision I personally salute. The R 11 will sell for $249 an up, starting this July.

Update: I’ve spent more time with the Acer Aspire R11 in the meantime and you can find my review over here, if interested. A wider selection of modern budget laptops and ultrabooks is also available over here.

Why not now? Well, mostly because this machine is going to be powered by Intel’s Braswell Pentium and Celeron hardware platforms and those are not available just yet. As a result, the R 11 is, one, going to be fanless (here’s a longer list of available fanless laptops), two, going to be efficient and three, going to be decently fast for everyday use. The latter two aspects are my suppositions though at this moment and I’m really curious on how the Braswell hardware will compare to the existing Atom or Core M lines.

Acer announced the R11 series will be paired with up to 8 GB of RAM and up to 1 TB HDDs, with various configurations available in different regions of the globe. Having a HDD means the little fellow won’t be completely quiet, but I’m pretty sure you will be able to easily upgrade that to an SSD if you want to.

Anyway, let’s get back on track. As you might have judged by the price by now, the Acer Aspire R 11 is made entirely from plastic and it’s not the sleekest machine out there. The outer shell gets a textured finishing and will be available in two different colors: White or Blue. Unfortunately it’s going to weigh around 3.5 pounds, which makes it far heavier than other 11-inch 2-in-1s and will probably not appeal much for those planning to use it as a tablet. But that’s a sacrifice Acer had to make in order to reach the low price point. Well, one of the sacrifices. 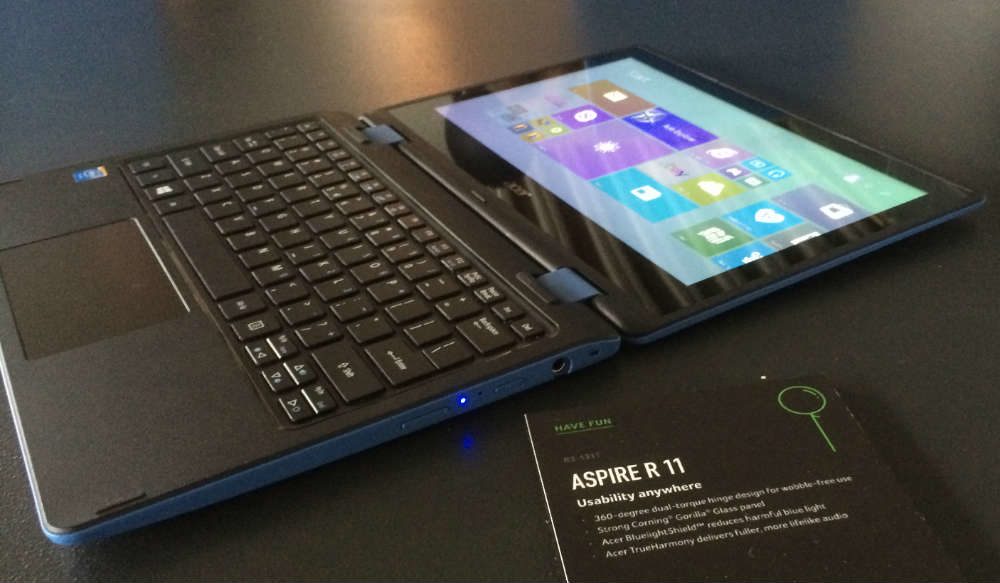 The interior and the keyboard are plasticky as well, still overall my first impression is fairly good, again, for a device in this price range. The machine felt solid, proper built, with sturdy, even stiff I might say hinges that allowed for smooth transition between the different use modes and also made sure the screen remains in the set position.

The IO is decent as well, with USB 2.0 and 3.0 slots, an SD card-reader, as well as HDMI output for those that would want to output video content onto a larger screen. An Ethernet port is also available, in case you’ll ever need to use wired Internet. Otherwise, the laptop does offer WiFi and Bluetooth.

Acer cut the corner with the display though as they went for an 11.6 inch 1366 x 768 px TN panel with rather poor colors, brightness and viewing angles. That’s not unexpected, but unfortunate nonetheless. We are of course talking about a touchscreen with a glossy layer of glass on top of the panel, since this Aspire is a convertible.

The Aspire R 11 will be available in Blue or White

To wrap this up, while there are still plenty of question unanswered at this point, we can conclude that the Acer Aspire R 11 is going to be an interesting 2-in-1 laptop for those of you on a very tight budget. There’s no doubt you can get better machines if you’re willing to spend more, as this one is plasticky, large and heavy, plus offers a mediocre screen. But none are actually selling for under $300, at least none of the Windows running machines.

Thus, if you’re after an inexpensive and colorful 2-in-1 for your kids or maybe even for yourself, the Aspire R11 should be on your shortlist. 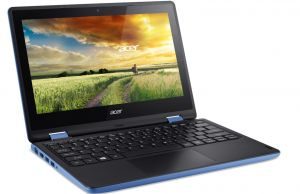 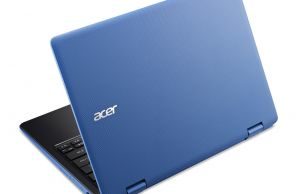 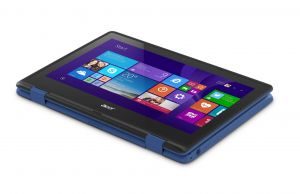 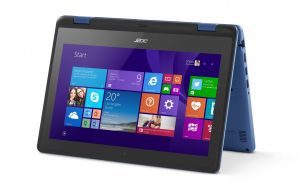 It will compete with the likes of the Toshiba Satellite Radius 11 or the HP Pavilion x360 and promises to outmatch them in terms of price. We’ll have to see how it fairs in terms of performance and battery life though before we get to draw any conclusions, as the hardware platform is going to differentiate it from many of its rivals.

But that’s something we’ll be discussing in a future review. For the time being, let me know what you think about this computer and whether or not it’s something you’d be interested in. And stay close for updates as we get close to the Aspire R11’s launch date.

Update: I’ve spent more time with the Acer Aspire R11 in the meantime and you can find my review over here, if interested.

Disclaimer: Our content is reader-supported. If you buy through some of the links on our site, we may earn a commission. Learn more.
Andrei Girbea, Editor-in-Chief of Ultrabookreview.com. I've been covering mobile computers since the 2000s and you'll mostly find reviews and thorough guides written by me here on the site.
← Previous Story Dell Latitude 7250 and 7450 – are these proper business laptops?
Next Story → Acer Aspire V 15 Nitro VN7-571G review with Broadwell hardware