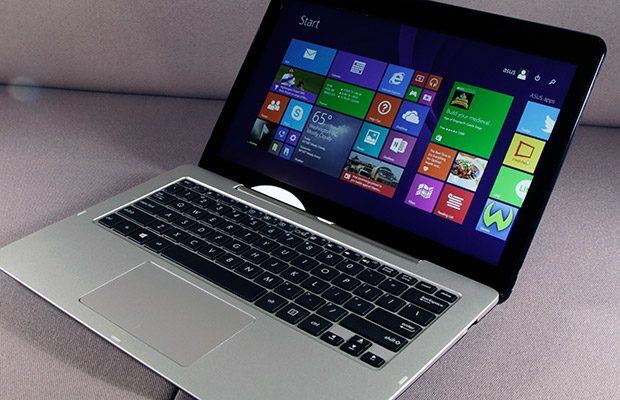 Got my hands on another Core M ultraportable in the last few days, the Asus Transformer Book T300FA, and this post is my collection of initial impressions on it.

Just to be clear, this is not the ultra-sleek T300 Chi tablet showcased at Computex and IFA this year, but a mainstream 2-in-1 convertible with a fairly affordable price tag. The Chi will be launched towards the beginning of 2015 as a premium notebook, with a sleek metallic case and a high-resolution display and will be a closer competitor to the likes of the Lenovo Yoga 3 Pro.

Update: Follow this link for my detailed review of the Asus Transformer Book T300FA, also available here on the site.  And check out the video below.

On the outside this 2-in-1 looks a lot like the Asus Transformer Book T200TA. In fact, I’m pretty sure the two are about the same size, but this one feels somewhat lighter and thinner. Haven’t measured it yet though.

That aside, this slate feels nice in hand. It’s not actually a premium device and it’s not made from metal, but from the same textured plastic we’ve seen on other Asus devices. But like I said before, it does feel fairly light and comfortable to use. I’ll give you the exact numbers in the review that will be available here on the site by next week. 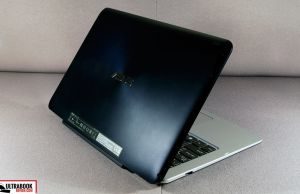 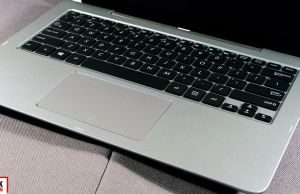 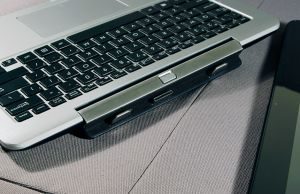 The T300 comes with a matching dock that includes a full-size keyboard, a trackpad, two USB ports and a hard-drive inside, but no extra battery (BTW, the Chi will include a secondary battery in the dock, as just another aspect that set it apart from this T300FA model). The keyboard is decent, rather plasticky though and the typing experience is not really on par with the T200’s keyboard from what I can remember. But I won’t jump to conclusions yet.

The latching mechanism feels a bit flimsy, as the slate wobbles in place when having the two attached and I wonder if that won’t damage the connector in time. At the same time, this is a pre-production sample and hopefully the final models will have a firmer latch. We’ll see.

OK, back to that screen now. To put in very few words: it’s not very good, but not bad either.

On one side Asus chose an IPS panel, so the viewing angles are alright, but the colors, contrast and brightness are meh. On top of these, the 1366 x 768 px resolution is not what I would expect from such a computer, since competitors offer FHD displays on their options. But even so, that won’t be that much of a problem if details and especially fonts wouldn’t look very fuzzy, pixelated on this screen.

Anyway, I’ve used this device in the last couple of hours and I could say my feelings on Intel’s Core-M platform haven’t changed from what I experienced with the Lenovo Yoga 3 Pro: it’s still slow. The T300FA is powered by the base Intel Core M-5Y10 processor in this Broadwell Y series, so I wasn’t expecting much in terms of performance anyway, but I was expecting it to deal with basic activities smoothly, and that’s just not the case. In fact, I feel this computer is, in terms of performance, closer to a CloverTrail device than a Haswell computer. And that’s not a bad thing, if it would come with long battery-life and a proper price tag.

Regardless, browsing in Internet Explorer is fairly smooth and the device can run 1080p Youtube clips and 1080p self-stored mkvs without stuttering. Performing the same tasks in Chrome though leads to an appalling experience and constant chocking, just like on the Lenovo, so stay away from Chrome for now, at least until Google or Intel take care of this.

Now, I won’t get into many details regarding performance here. I will tell you this device is fanless though and at the same time, its back part gets quite warm during daily use. I didn’t find it uncomfortable, but it wasn’t pleasant either. Again, we’ll talk more about that in the review. 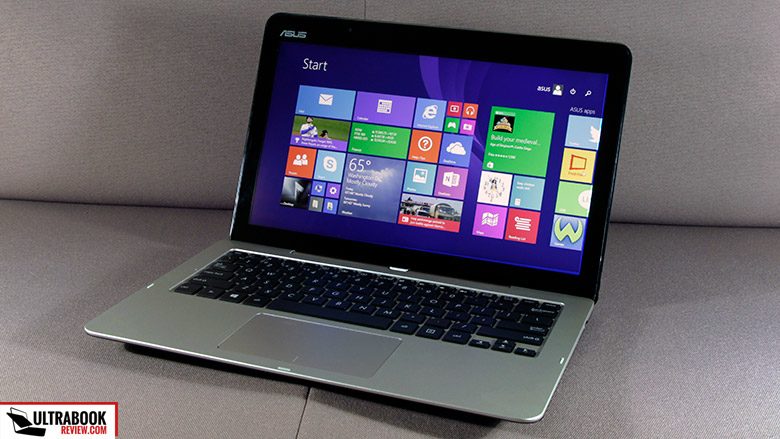 On the outside the Transformer T300Fa looks like a nice 2-in-1, but I’m not impressed with the screen and hardware platform’s performance

Ok, to wrap this up, the Asus Transformer Book T300FA sits somewhere between the T200TA model and the the Haswell Based T300LA, as a mid-priced mid-specced 2-in-1 detachable. The big novelty is the Core M hardware platform and this is my second encounter with it, which should be enough to draw some general conclusions in the final post.

Update: Follow this link for my detailed review of the Asus Transformer Book T300FA, also available here on the site.

But here’s what you’re getting with each of these Transformer Books mentioned above:

The latter is obviously the faster of the three and offers the better screen. So the question is which is the smarter pick between the first two? Well’ I’m not going to answer that question now, let me spend some extra time with the Core M Transformer Book and then we’ll see.

In the meantime, I’d love to hear what you guys have to say about this T300FA, what you think about Intel’s Core M hardware and of course, if there’s anything in particular you want me to test on it, don’t hesitate to ask in the comments. Stay close.