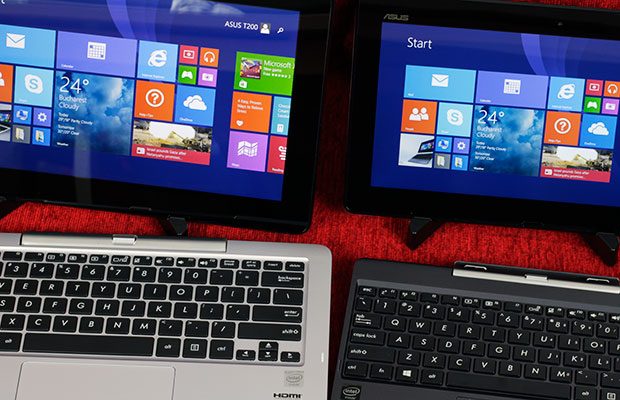 Asus were among the very first to offer stand alone Windows tablets paired with matching docking stations with their Transformer Books.

In the meantime, this has grown to become one of the most popular 2-in-1 form-factor available these days and while other manufacturers released similar devices, Asus did not lie on their back and waited.

As a result, they just recently announced the T100TAM and the T200TA Transformer Books and I’ve spent some time with both of them in the last few weeks.

These are not ultrabooks, but rather affordable hybrids, with a starting price of under $400. For that kind of money you’ll be getting Windows 8.1 slates built on Intel BayTrail-T low-power hardware, a platform meant to be primarily efficient, while coping fine with everyday basic tasks. So performance is not their strong-suite, there are other hybrids to look at if you need that.

However, these Transformer Books sure offer a lot for the money and if you’re looking for inexpensive mini-laptops that can handle more than just the fun, you should have them on your shortlist.

The full reviews of these two Transformer Books are available on my other website, TLBHD.com, where I cover tablets and affordable ultraportables. You’ll find the exact links below. But first, let me tell you a few things about these two. 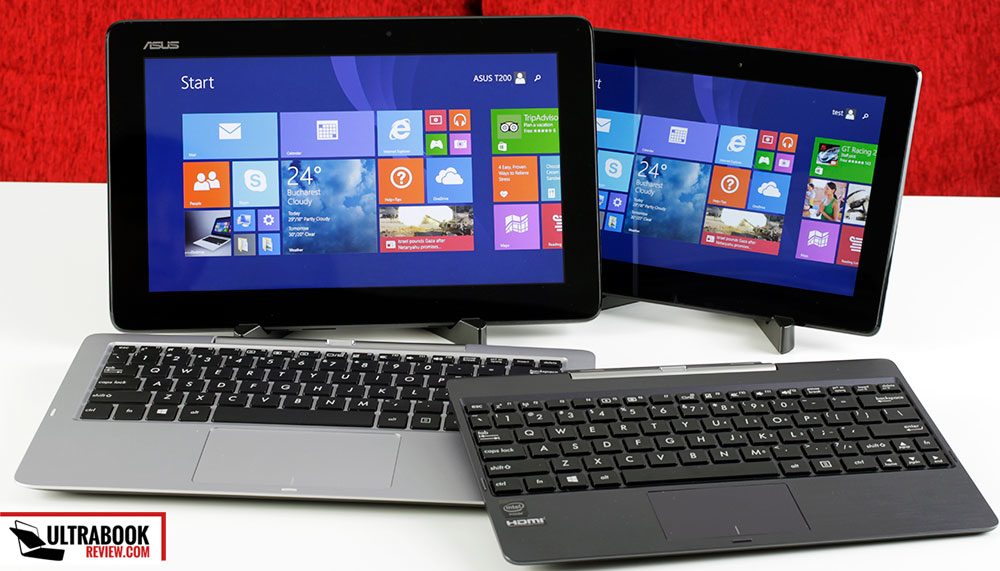 The tablet itself is now covered in metal, while the older version was entirely made of plastic. That allows it to look and feel more premium, but at the same time adds to its total weight, as the T100TAM model tips the scales at about 1.33 pounds, while the plastic TA weighs only 1.25 lbs.

This aside, not much has changed, at least not on a first look. The new 10 inch Transformer Book still packs the same ports and buttons as last year’s model, positioned in the exact same spots, and still offers a touchscreen with 1366 x 768 px resolution. However, Asus replaced the panel with a slightly improved one, capable of delivering more accurate colors, according to my tools. But you’ll hardly see that with the bear eye, even when having the two side by side. Even so, if you need color accuracy on your device, you’d be glad to know the TAM delivers an improvement.

The other major change is the hardware inside. Still part of the Intel BayTrail-T platform, the Z3775 CPU is slightly higher clocked than the Z3740 CPU used on the original T100 and bundles slightly faster graphics. And while on paper these might not seem much, every little bit counts on a low-power device like this one.

Paired with 2 GB of RAM and eMMC storage (although a slow flash when compared to what we get on ultrabooks), the T100TAM Transformer Book can deliver a solid experience as long as you don’t push it. Browsing between up to 10 tabs while occasionally listening to music, editing texts or watching some clips on Youtube goes smoothly. The tablet can also handle older Windows games and even photo/video editing software, as long as you stick with minor tasks, plus all the apps in the Windows Store.

The tablet comes with a docking station and that’s what really make it more versatile than a regular slate could be. The dock includes a keyboard (with rather small and cramped keys, but that’s what you can get in this size class), a trackpad (again, tiny, but it will do the job if precision is needed), an USB 3.0 port (for peripherals) and an extra 2.5″ storage bay inside (some models come with a 500 GB HDD included, but you can put your own solution in there, preferably an SSD, to keep this noise-free). 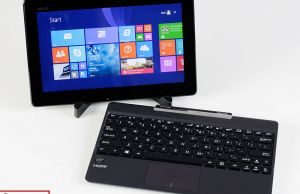 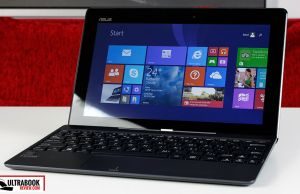 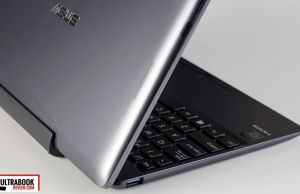 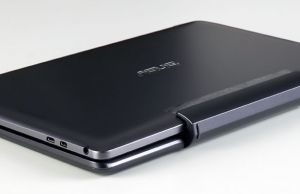 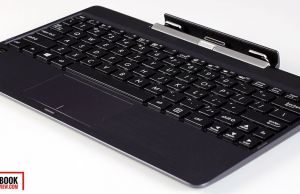 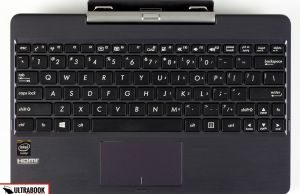 Speaking of noise, the Atom platform inside the T100TAM is fanless, and that makes the whole thing virtually silent. It’s also efficient, I will say that again, which allows the device to run cool most of the time (the back gets somewhat warm under load) and deliver roughly 8 hours of daily use on a single charge of the 31 Wh battery (placed inside the tablet, there’s no battery in the dock). Too bad this battery takes forever to charge, as charging is done via the microUSB port, something I’ve also complained about when I’ve reviewed the original Transformer Book T100TA.

To sum these up, the Transformer Book T100TAM is only a marginal update of last year’s model, as you can find from the detailed review available over here. The metallic body, the slightly faster hardware and the marginally improved screen are its differentiators, so if you are looking for such a compact device right now, the TAM might be worth getting over the TA. But if you already own the T100TA, there’s little to no reasons to upgrade.

The T200 is a brand new device, the first Transformer Book with an 11.6 inch screen. It’s just as affordable as the 10 inch version, selling for $399 and up, although its base version comes with 32 GB of storage space, while the base T100 offers 64 GB.

Regardless, the T200TA is larger than the T100 and heavier as well. The tablet alone weighs around 1.7 pounds, and when connected to the dock, the entire ensemble tips the scales at 3.6 pounds, that’s with a HDD included in the dock. Because of the larger screen and much thicker bezel around it, the T200 has a bigger footprint than the T100, or in other words, Asus did have to sacrifice the portability of this device in order to get it in stores as cheap as they did.

In comparison, they also offer a metal-made T300 with a 13.3 inch display and a 50 Wh battery, which is just as heavy as this 11 incher, but way more expensive.

On the other hand, the T200 packs a much roomier dock than the T100 does, with a full-size keyboard (similar to the one on the Vivobook X202), a spacious trackpad and palm-rest, plus more ports around the sides (2 USBs and LAN). And all these, but also the fact that all the connectors on the slate itself are placed on the left-edge, make this device way more practical and comfortable to use in laptop mode.

Hardware and specs wise, the T200TA is almost identical to the T100 mentioned above. It’s powered by an Intel Atom Z3775 processor with 2 GB of RAM, packs an HD touchscreen with an IPS panel, bundles a reliable Broadcom Wi-Fi module and a large 37 Wh battery, larger than the one on the 10 inch Transformer Book, which translates in 8-9 hours of daily use on a charge, and that’s definitely not bad at all. On top of that, the T200 charges via a dedicated pin, so it does it much faster and can be comfortably used during this time, unlike the T100.

Long story short, the Asus Transformer Book T200TA is overall the better 2-in-1 of the two, while the T100 remains the better slate, as it is smaller and lighter. The detailed review will tell you more about it, so make sure to check it out.

Update: The 32 GB storage / 2 GB RAM model is now available in a few different countries, but in the US it seems to be a BestBuy exclusive and sells for $399 (or 399E in Europe). Most of the other big US webstores though, including Amazon or Newegg, list a $499 version of the T200TA, with a faster Intel Z3795 processor, 4 GB of RAM, 64 GB of storage and Windows 8.1 64-bit. That’s $100 on top of the base model, but the extras are probably worth it. The increased amount of storage will come in handy and the faster CPU and more RAM will boost the device’s everyday performance and multitasking abilities. 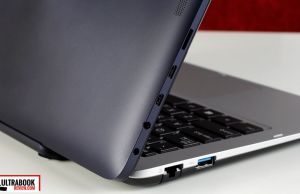 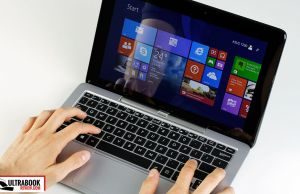 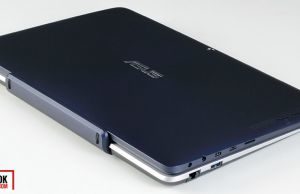 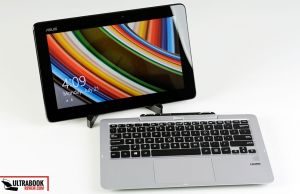 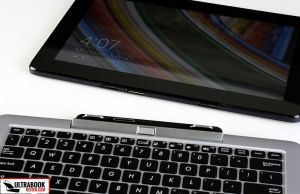 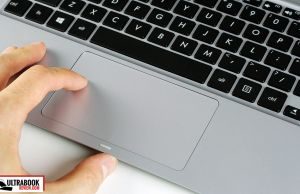 The video below pitches the two Transformer Books one against the other and shows you their main differences and similarities. This post does the same thing, but gets more in depth.

An 11.6 inch Transformer Book has been long awaited. Some of you complained about the fact that the T100 TA is actually too small to allow you to properly get things done and I’m inclined to agree. A 10 inch slate is properly sized for home-entertainment, but if that’s what you need, a Windows tablet is probably not going to be your main pick anyway.

People buy these small 2-in-1s for what they can do, for their ability to run legacy software as well as the touch-optimized apps, for the keyboards they provide and the ability to connect accessories when needed, something that’s a bit more difficult to do with an iPad or an Android tablet. And the 10 inch screen might be indeed too small to provide an enjoyable Desktop-mode experience, while there’s just not enough space for a proper keyboard and trackpad on a device this small.

An 11.6 inch screen though is larger, large enough to see what you’re doing on it, while still keeping the device fairly portable. And with the larger footprint, there’s room for a decent keyboard and trackpad, plus all the others inside the T200 (more ports, bigger battery). Of course, the T200 is rather heavy and big for an 11 incher and that might steer some of you away, but it compensates with its aggressive price and that’s why this thing really hits a nice sweet-spot. 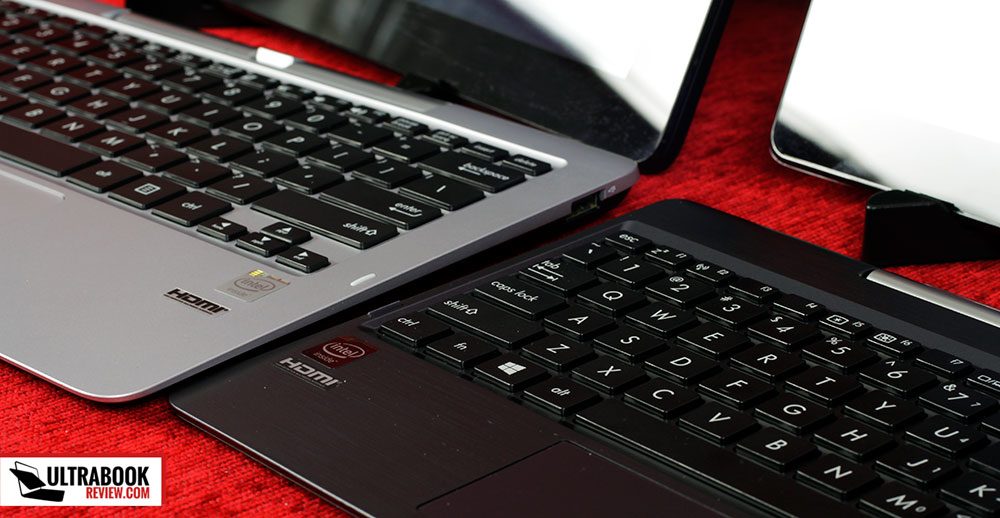 One is more portable, the other more practical, but they both start at $400 and have their own place under the sun

Of course, both these Transformer Books have worthy rivals, some better built, better looking or with extra features. But pretty much all them are more expensive than these are. So if you’re on a tight budget and after a compact 2-in-1, the Asus machines have to be on your list. I do advise you to check out the competition as well, like the Acer Aspire Switch 10, HP Omni 10 or the Dell Venue Pro 11, and also my curated lists of compact ultraportables and more affordable ultrabooks alternatives. Last but not least, if you need a small computer for light activities, then you should also check out the available Chromebooks that sell for as low as $199 these days.

To wrap this up, there are plenty of aspects you’ll like about the two Transformer Books mentioned in the post, but each has its particularities and each is better suited for certain activities/users. So in the end the choice is entirely yours, as you know better than anyone what you want from your computer and which details matter more to you than others. The comments section is open though, so if you have any questions or anything to add to this comparison, feel free to do it, I’ll be around to reply.

Disclaimer: Our content is reader-supported. If you buy through some of the links on our site, we may earn a commission. Learn more.
Andrei Girbea, Editor-in-Chief. I've been covering mobile computers since the 2000s and you'll mostly find reviews and thorough guides written by me here on the site.
← Previous Story How to upgrade the memory on the Asus Vivobook and the Transformer Book Flip series
Next Story → Asus Transformer Book Flip TP300 / TP300LA / Q302LA review