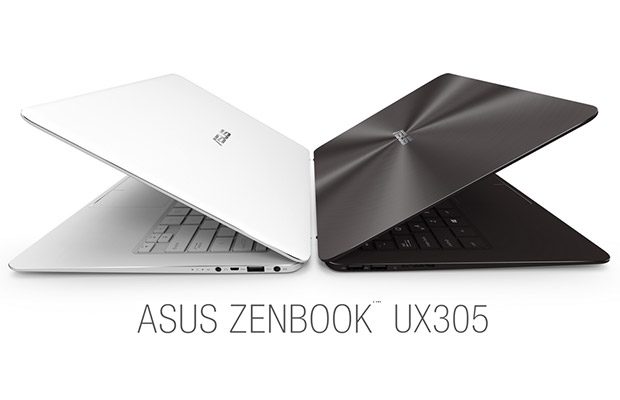 With Intel Broadwell hardware just a few months from hitting the stores, Asus announced the Zenbook UX305 line at IFA Berlin, a device that promises to be one of the slimmest 13.3 inch laptops ever created and at the same time, one of the lightest. My full review of the Zenbook UX305 is available over here. Check it out.

In this post I’ve gathered all the available info on the UX305 series, including specs, pictures and details on various features, prices and the release date.

The UX305 will supposedly have a 12.3 mm body and based on how Asus usually measure their devices, that’s excluding the rubber feet. For comparison, their previous Zenbook UX301LA top-of-the line ultrabook was 15.5 mm thick, so this new model shoves off a few millimeters from its height.

Now, that’s not necessarily going to make a big difference in everyday use, but the UX305 is also lighter than the UX301LA, tipping the scales at 1.2 kilos ( 2.65 lbs), while the UX301LA weighs 3.1 lbs. And this part is actually important, as I can get used with a slightly thicker device, but really appreciate the every bit of ounce dropped.

Update: My full review of the Zenbook UX305 is available over here. Check it out.

Update2: The Zenbook UX305FA is now available in the US for $699 and that kind of money gets you an excellent configuration with a Core M-5Y10 processor, 8 GB of RAM, a 256 GB SSD and a FHD matte display. Follow this link for more details.

Update3: Asus released the Zenbook UX305CA in the meantime, an updated version of the UX305FA, with Skylake Core M processors, that promises to improve performance and battery life, while keeping prices at bay.

At the same time the UX305 seems to have pretty much the same footprint as the UX301, based on the specs list above and the size of the bezel around its 13.3 inch display. 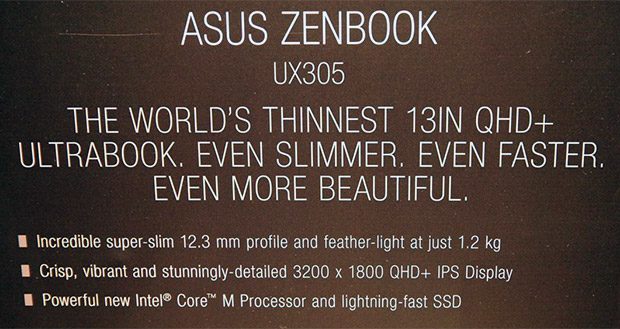 The Zenbook UX305 in only a few words

You’ll find a few pictures and videos included in this post that should show you what to expect from the UX305 Zenbook.

It will be available in two different colors (“Obsidian Stone” or “Ceramic Alloy”, or some sort of dark-grey and white) and it does look pretty sleek, keeping the familiar lines of the Zenbooks, with the concentric circles pattern on the lid cover and beveled sides on the darker finishing, but chromed elements on the white one. There’s no glass on the hood or on the interior like on the UX301LA, which is good news, for a number of reasons (easier and cheaper to manufacture an aluminum shell, less prone to fingerprints). And you can see for the pictures that the Obsidian Stone version of the UX305 is going to show smudges quite easily, which should not be a problem on the white model.

At the same time the UX305 seems to pack a marginally larger trackpad than the other Zenbooks before and a similar keyboard (latest info show that the UX305 is not going to offer a backlit keyboard), painted in the same color as the inner body, so again, Asus does not care about contrast. Besides that, I’m seeing 3 USB ports on these laptops, a card-reader and a micro-USB slot on the sides, but Asus will probably include some adapters as well. There’s no miniDP port though, which can be problematic in you plan to connect a high resolution screen to this computer.

The UX305 is not only a new device on the outside, it also packs fresh goodies on the inside, with the Broadwell Core-M hardware being the biggest novelty here and promising fast performance and long battery life (you should expect up to 10 Hours from this one, according to Asus).

Chippy at UMPCportal sheds more light on the hardware specs and one version of the UX305 will include the Intel Core-M 5Y10a processor with 4 GB of RAM. That’s probably going to be a base level configuration. At the same time, he report there’s going to be a 45 Wh battery inside this laptop, slightly smaller than on the UX301LA, but hopefully enough to deliver on those 10 hours promised (or at least 7-8 of actual real-life use).

Keep in mind that the Core-M is the low-power version of the Broadwell line and a successor of the Core-Y series, thus it’s not going to be very powerful and will only be available on the thinnest designs. Chances are most of them will be fanless, I can’t confirm if that’s the case for the UX305 or not (Update: It is, and a more detailed list of fanless ultrapotables is also available here). There are cooling grills hidden behind the hinge, but that does not prove anything, Asus might offer distinct configurations for this one and some of them could indeed require no active cooling. 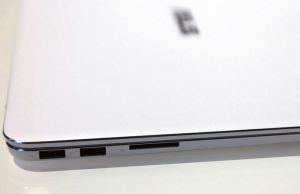 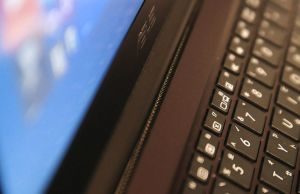 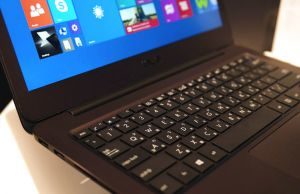 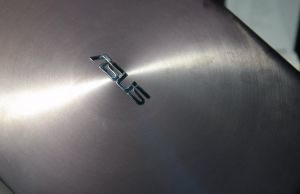 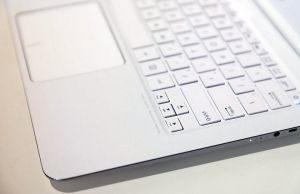 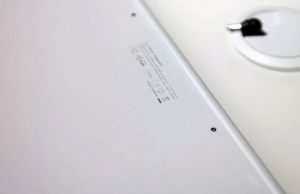 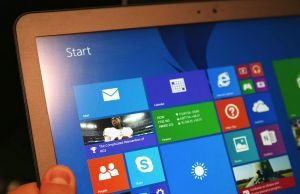 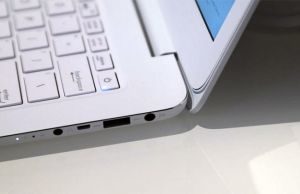 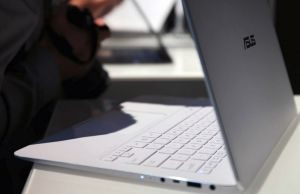 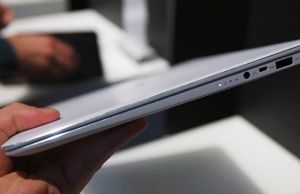 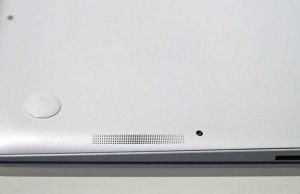 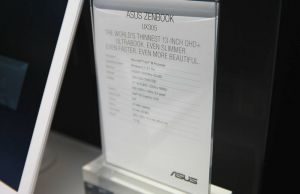 I’m not a IFA this year, so I must thank Lars from allaboutsamsung.de for the pictures above.

There’s also a sharp 3200 x 1800 px screen on this laptop, which again I’m not necessarily a big fan of, especially if it uses the same panel as the Zenbook UX303 or the Lenovo Yoga 2 Pro, known for its annoying color problems. Hopefully its a different panel or at least Asus will address the color issues by the time the Zenbook UX305 gets in stores. It’s also worth noting that the models showcased at IFA came with a matte screen, but if I’d were to guess, the final units will mostly get touchscreens. Still, who knows, maybe Asus will have some versions with matte displays as well, I know there are plenty of users who would appreciate them, me included.

The specs also mention a 1920 x 1080 px screen option, so we do know that Asus plans on offering at least two display types for the UX305.

Update: Latest info suggest the UX305 will  be offered with either a QHD+ multi-touch panel and either a matte (non-touch) or a glossy (touch) fHD display for the base versions. These last options might not be available worldwide though, we’ll see

Of course, the Zenbook UX305 won’t be available in stores just yet. I don’t have exact details on a launch date or prices for the time being, but don’t expect this sooner than the end of the year, probably in November/December. Hopefully this will be more aggressive priced than the UX301LA line and at the same time I do hope Asus will actually deliver it worldwide and on time, not like with the UX301LA series last year or the UX303 right now, which continues to be delayed.

Update: The Zenbook UX305 is going to start at 799E over here in Europe, so pretty much around $800 bucks in the US, with higher end (and thus pricier) configurations available as well. Should hit the stores in early November, if there are no delays.

Update2: My full review of the Zenbook UX305 is available over here. Check it out.

Anyway, I’ll keep my eyes peeled for any insights on the Asus Zenbook UX305 though and I will update this post once I find anything worth sharing, so stay tuned.

Disclaimer: Our content is reader-supported. If you buy through some of the links on our site, we may earn a commission. Learn more.
Andrei Girbea, Editor-in-Chief of Ultrabookreview.com. I've been covering mobile computers since the 2000s and you'll mostly find reviews and thorough guides written by me here on the site.
← Previous Story Asus G771JW / G771 review – a capable 17 inch multimedia laptop
Next Story → Asus Zenbook UX303LN vs MacBook Pro 13 with Retina Display