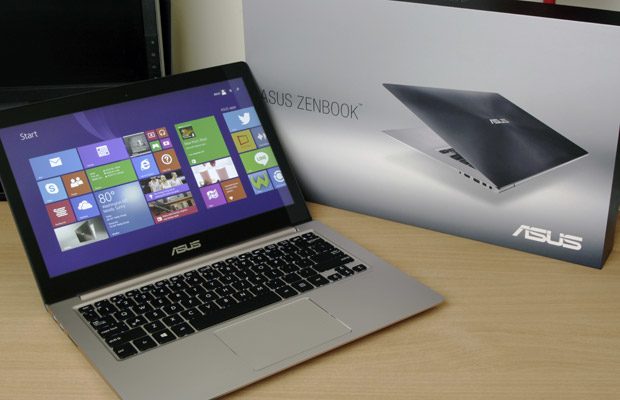 I’ve got my hands on an Asus Zenbook UX303LN and played with it in the last days. This one will be officially released later this year (around July-August) as probably the most powerful 13 inch Zenbook of the 2014 line, with the updated Intel Haswell processors and Nivida GT 840M graphics, plus other top of the line specs.

My full review is going to be available in a few days. For now, I’ll just share some impressions gathered in the last days and I’ll be waiting for your questions in the comment section at the end of the post, in case you want me to test anything in particular. I’m going to have this unit for long, so be hasty :)

I also have to add that this is an engineering sample (thus, a pre-production unit) I was offered for tests by Asus, so it’s not a final retail unit. Even so, with the exception of raw performance, which might actually improve with new drivers, by the time the UX303LN will actually hit the stores, most of the other aspects are pretty much what you should expect from the retail versions.

My detailed review of the Zenbook UX303LN is up and you can find it in here. Have a look! 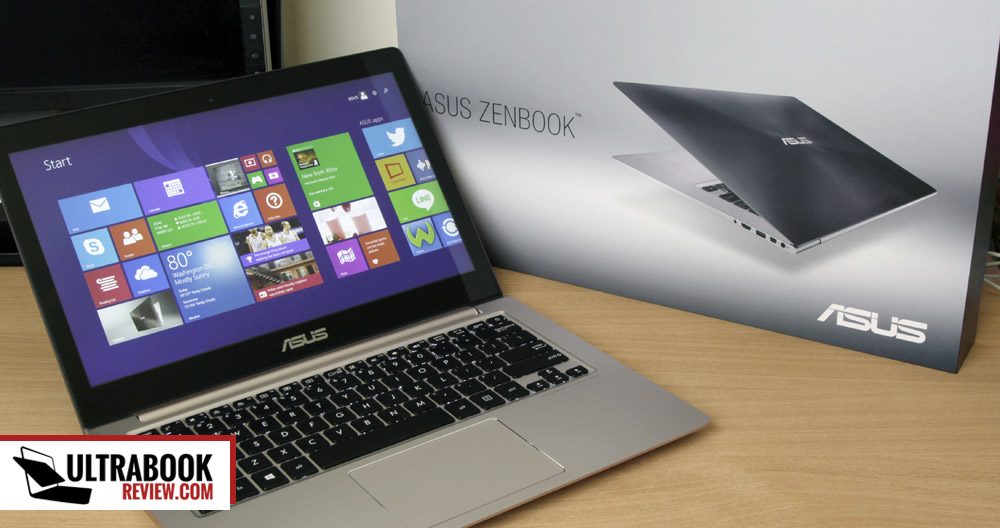 The Asus Zenbook UX302LN borrows its lines from the Asus UX32VD, with a fully metallic body. Aluminum covers the lid, the inner case and the underbelly. However, this new unit got a more subtle finishing. Older Zenbooks sported those pronouced concentric circles on the hood and a brushed patern on the palm rest. On the UX303LN, the palm-rest is no longer bruched, but simple, plain, like a Macbook, while the circles on the hood seem to have been toned down as well. At the same time, the sheet of metal covering the belly feel sturdier, thicker than on the older UX32VD, which gives the entire laptop a more solid feel when grabbed and carried around.

The UX303LN is pretty much as thick and solid as the older Zenbooks. I’ll have the exact numbers in the review. It also sports a solid selection of ports, with 3xUSBs, Full Size HDMI, mini-DP and a card-reader, plus the adapters included in the package, so nothing has changed on this front. 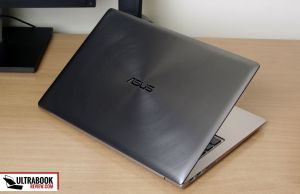 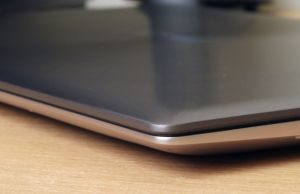 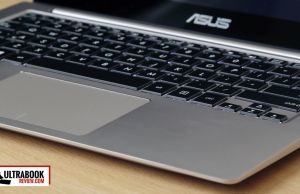 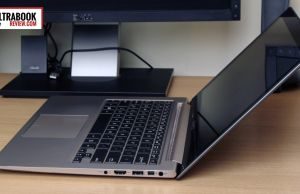 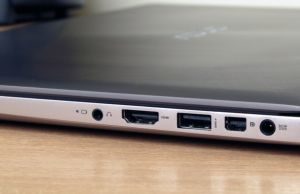 The screen however is a novelty for a Zenbook, as the UX303LN gets a 13/3 inch 3200 x 1800 px panel (hardware ID SDC424A). That’s the same panel we’ve seen on some Lenovo Yoga 2 Pro and some Samsung Ativ Book 9 Plus ultrabooks, and it comes with pros and cons.

For the pros, it’s a fairly bright and sharp panel. Actually using the laptop at full resolution with the fonts scaled to 200% results in crisp and sharp interfaces and fonts. The same panel was a lot fuzzier on the Yoga 2 pro that I tested a while ago, and that may be due to Windows 8.1s scalling improvements, or maybe the glass coating on top? Not sure, but the experience is clearly better, although I no longer have the Yoga 2 Pro for a side by side comparison.

On the other hand, the murky yellow problems that a lot of Lenovo users have been complaining about is still here. Simply put, this unit will not display proper yellows no matter of the Power Mode picked, but some sort of mustard-like color. The pic below should give you an idea. That’s bad, but Lenovo actually solved this problem with a BIOS update (for all profiles except Power Saver), so hopefully Asus will do the same thing by the time the UX303LN will hit the stores.

Colors are problematic, as shown when compared to the iPad Air (left)

Not much has changed here from the previous generations. In fact, both the keyboard and the trackpad look a lot like the ones on the UX302LG. I feel that the keys travel a bit more into the chassis than they did on the UX302 though, if I remember correctly. May be wrong here, I don’t know. Oh, and there’s another thing worth mentioning: there’s some flex when pressing the middle of the keyboard which was not that pronounced on the previous UX302, but again, I’m not entirely sure here, as I don’t have the two side by side for a proper comparison. 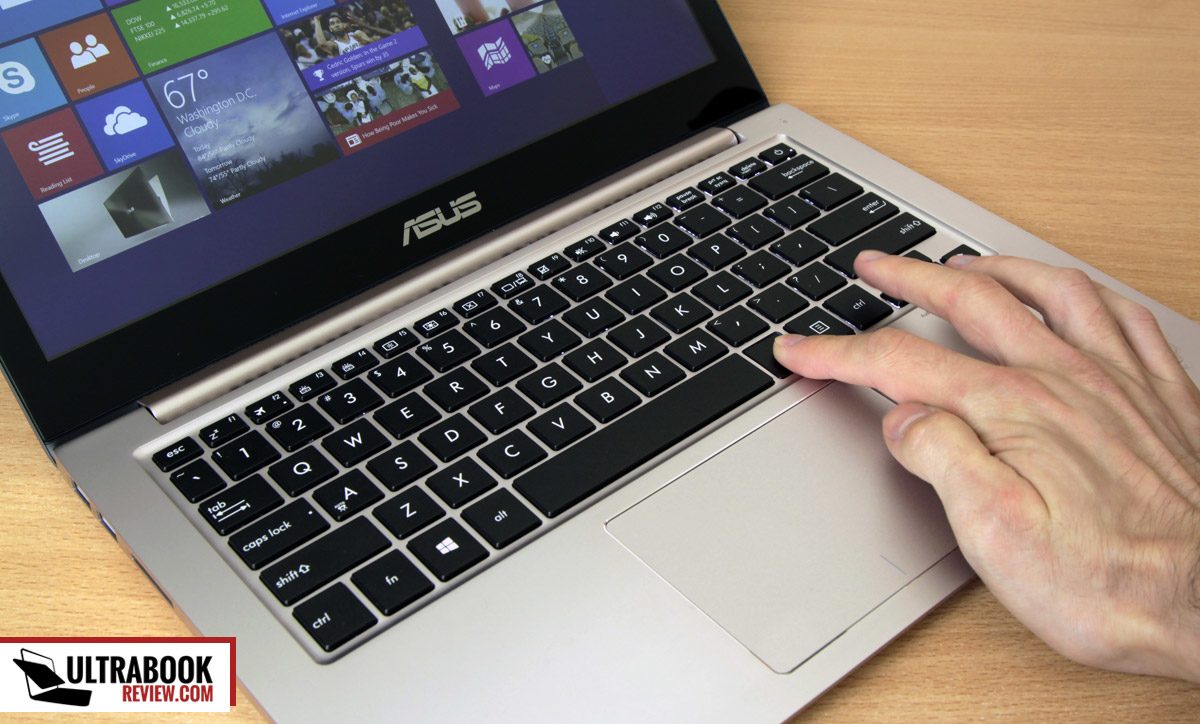 The keyboard and trackpad we’re already used with on Zenbooks

Hardware wise, this unit comes with an Intel Core i7-4510U processor, 12 GB of RAM, a 256 GB SSD made by SanDisk and Nvidia’s GT 840M dedicated graphics chip. I other words, it’s quite a beast.

Nvidia’s drivers are still fresh and I couldn’t get anything newer than 332.50 to work on this unit. So I’m not really sure this laptop is running at the best of its abilities. Even so, the numbers I’ve got in both benchmarks and games show an improvement over the Asus UX302LG. I’ll tell you more about those in the review. 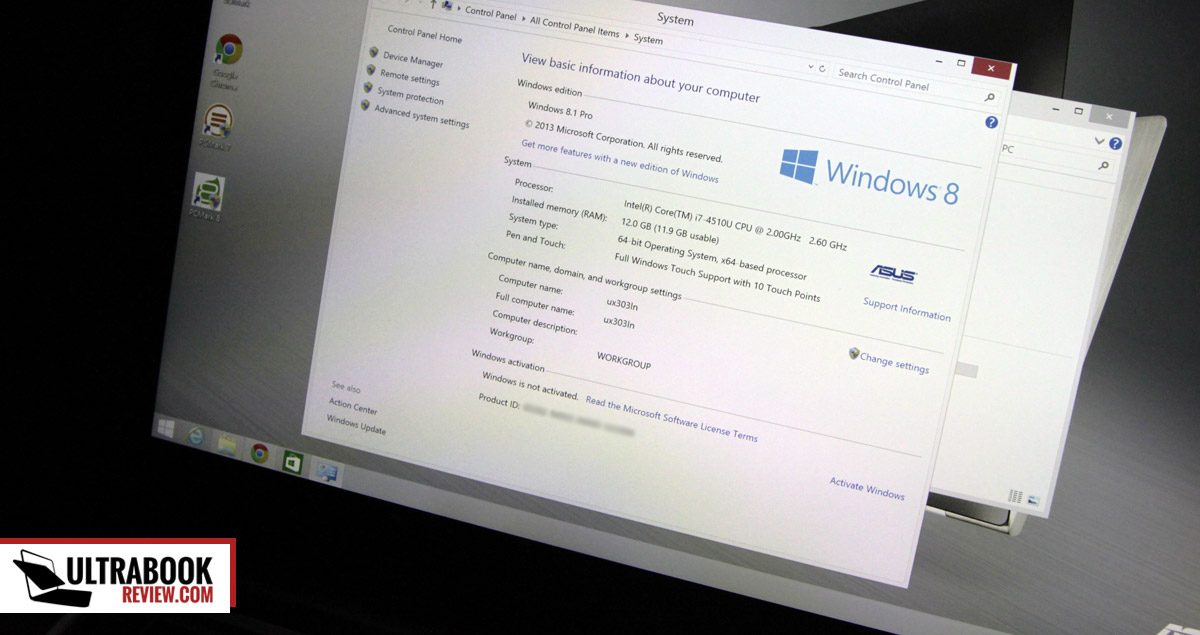 Solid specs for a 13 incher

That aside, the UX303LN is running quiet and mostly cool. With daily use, the fans are barely audible in a silent room and the aluminum body gets merely warm on the belly and just on top of the keyboard. The exhaust is still pushing hot air towards the screen, which I was hoping Asus will change, as the bottom side of the panel can get quite hot when running games and that might have a negative impact on the long term.

On top of all these, I should also add that this laptop is rather slow to charge when used. In fact, it barely charges when playing games or running other demanding software, but that was expected. The charger’s tip is also a bit loose in its place, but given the same tip has been used on most recent Zenbooks, that’s probably an issue with my unit.

As for battery life expectations, well, I’ve yet to finish my tests, but based on BatteryBar v3.6.3, the UX303LN discharges with an average of 8-10 Wh while performing casual daily activities (browsing with several tabs opened, watching some movies, listening to some music, with Wi-Fi ON, Balanced Mode, screen at about 50% and the Keyboard’s illumination set on the lowest level). That’s not bad.

You’ll find more about this laptop in the detailed review available here.

Wrap up and your questions

Anyway, these are the main things I wanted to tell you about the UX303LN for the time being. We’ll get more in depth on each important aspects in the final review though, including the screen, the keyboard and trackpad, the battery life, connectivity and of course the performance and temperatures. 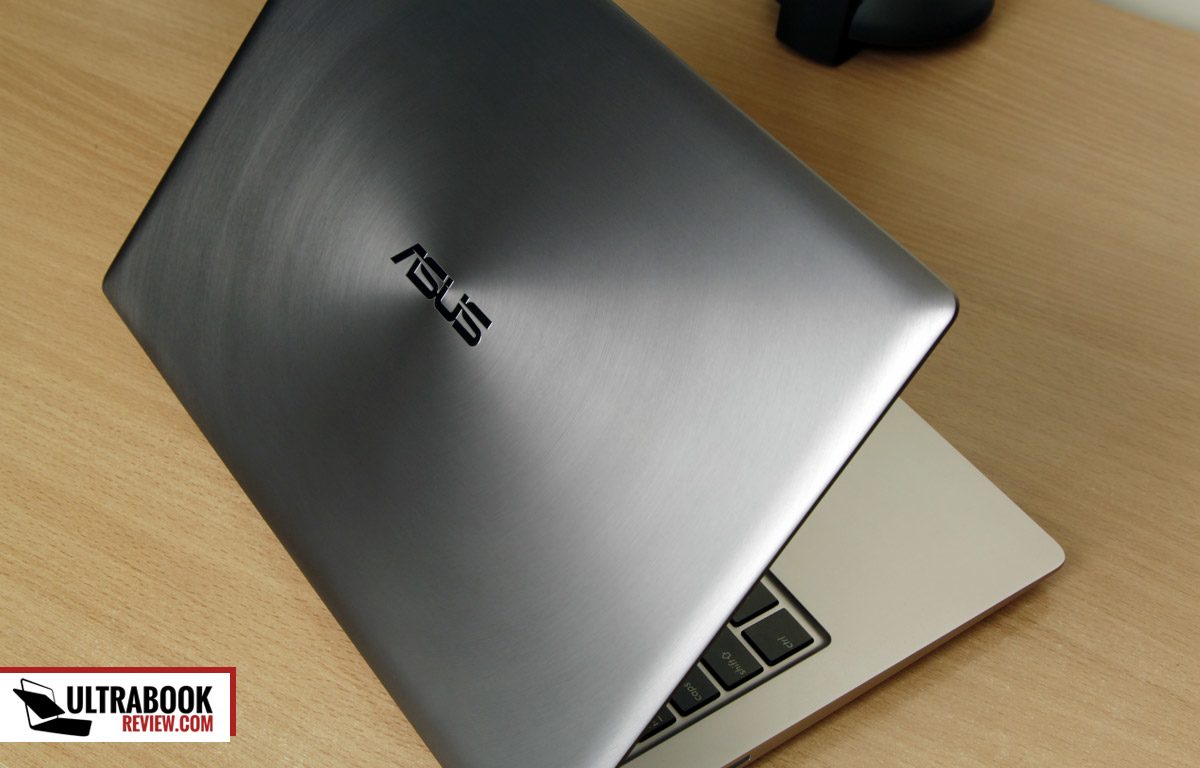 And if there’s anything else you might want to know about this laptop or anything in particular that I should try, go ahead and let me know in the comments below. I plan on posting the review by Monday, so I do have a few more days to test out stuff, before sending this Zenbook UX303LN back to Asus.

Update: The review is up and can be found here.

Disclaimer: Our content is reader-supported. If you buy through some of the links on our site, we may earn a commission. Learn more.
Andrei Girbea, Editor-in-Chief. I've been covering mobile computers since the 2000s and you'll mostly find reviews and thorough guides written by me here on the site.
← Previous Story Lenovo Yoga 2 Pro vs Asus Zenbook UX301 LA comparison
Next Story → ASUS Transformer Book Flip series – specs, pricing and first-hand reviews