Acer and Asus are two of the most important computer manufacturers that decided to enter the fresh and exciting ultrabook market and their products, while short of being perfect (or extremely cheap, for that matter), are clearly strong and elegant enough to attract quite the attention.

The Acer Aspire S3 and Asus Zenbook UX31 will be analyzed, reviewed and compared in the following lines and hopefully, by the end of this post, we will have a clear image of which one of the two is the better all-around piece of computer equipment.

Check out Mike’s detailed video comparison below for most of the details you will have to know when putting the Aspire S3 and the Zenbook UX31 one next to the other. For extra info, see the rest of the post, after the clip.

While at a first sight these two look pretty similar, if you take a closer look you should easily notice the difference in build quality and reliability. The UX31’s chassis is made out of strong and smooth aluminum, while the Acer S3 is basically made out of plastic and covered in aluminum.

Needless to say that Acer’s ultrabook is not extremely robust or reliable, while the Zenbook UX31 should be extremely solid. As for the product dimensions and the weight, things again look very similar, but are a bit different. The UX31 is 0.22 pounds (100 grams) lighter than the S3, while in terms of thickness, both ultrabooks are great, measuring a mere 0.7 inches at their thinnest point.

While I myself am not very bugged by the S3’s plasticky exterior, I can’t say the same about the plasticky keyboard. This is comfortable and well-sized, but extremely wobbly and not very accurate at times. 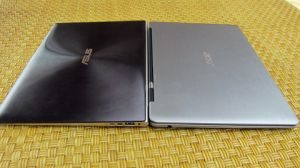 The Asus UX31, on the other hand, has a pretty cool keyboard, which provides comfort, but also accuracy and responsiveness. It’s not backlit, like the ones featured by the MacBook Air or Toshiba Z835, but it’s still far better and more functional than the one you can find on the S3.

As for the touchpads, these are not very great in neither of the two ultrabooks. The UX31’s trackpad has a couple of very serious software glitches, which make it occasionally go crazy, while the one featured by the S3 is kind of stiff, as well as not very comfortable.

One of the Asus UX31’s most important ace up its sleeve is the high-resolution display, which is better than the one sported by the MacBook Air and, of course, far better than the one featured by the Acer S3. You get better viewing angles on the UX31, brighter colors, higher contrast and you can also run HD content smoother and easier. 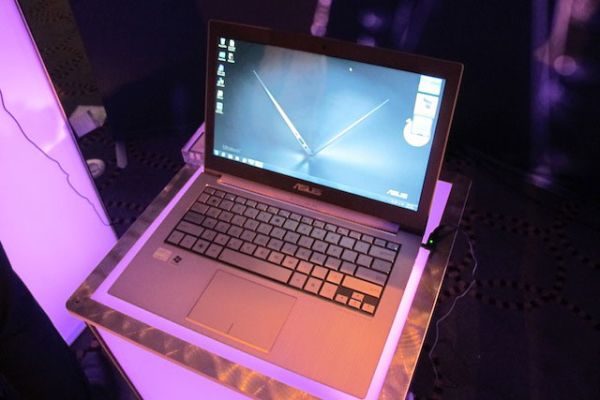 The Asus UX31 is snappier and has a better screen than the Acer S3.

In terms of hardware, the Zenbook UX31 is once again the better machine, featuring a slightly snappier processor, as well as a larger SSD. The Acer S3 is powered by a 1.6 GHz Intel Core i5 processor and comes with a 20 GB solid state drive, as well as a 320 GB hard drive.

The UX31, on the other hand, features a 1.7 GHz i5 chipset (the base version), as well as a 128 GB SSD (no HDD, but you don’t need it, as it could consistently slow your system). Both ultrabooks come with 4 GB of RAM, as well as integrated Intel HD 3000 graphics card, but all in all the UX31 should offer the better gaming, browsing and multimedia experience. 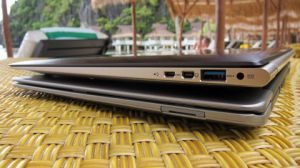 In terms of connectivity and ports, the two ultrabooks are pretty similar.

Aside from being louder and more fragile than an SSD, a hard drive lowers a computer’s battery life, which is probably the S3’s biggest problem. Acer’s ultrabook can only go for around four hours on a single charge, if we are to trust Engagdet’s battery test, while the Asus Zenbook UX31 is capable of easily going for over five and a half hours between charges, according to the same test.

That’s a pretty important difference, if you ask me, and it could well go up for a regular user, who doesn’t wear his laptop’s battery as quickly as these tests do.

As for the connectivity and ports, both ultrabooks come with WiFi, Bluetooth 4.0, HDMI and USB ports, as well as an SD card reader. The S3 comes with a full HDMI port (the UX31 only has a mini-version), however, while the UX31 comes with a 3.0 USB connecter (the S3 only has USB 2.0).

We’ve covered pretty much all the important bases regarding these two ultrabooks, but there are still a couple of details you might be interested in. For example, the Acer S3 has the better webcam (1.3 MPx-0.3 MPx), while the UX31 has clearly the more capable built-in speakers.

Both ultrabooks run Windows 7 and both come with some pre-loaded software. There are also a couple of so-called ‘’innovative’’ technologies on the S3, like the Instant On and Green Instant Connect functions, but these are marketing gimmicks rather than things that could make a difference for a regular user.

The Acer Aspire S3 is already called ‘’the poor’s man ultrabook’’ and, while it isn’t exactly cheap, it’s far more affordable than the UX31. Acer’s laptop goes for around 850 dollars at the moment, while the 13-inch Zenbook starts at around 1,100 bucks. For more details about the two laptops’ prices, but also for online stores where you can buy them at the best prices, check out this article about the Acer Aspire S3 and this one, about the Asus UX31. 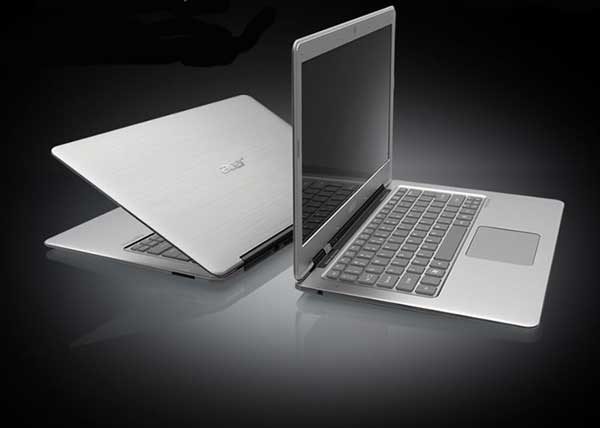 Aside from its low price, the Acer S3 doesn’t really have any other aces up its sleeve.

As I already concluded after comparing the S3 with the MacBook Air, Acer’s ultrabook could be a decent choice for a tech enthusiast on a budget, but other than that it doesn’t have much to offer.

The Asus Zenbook UX31 has better build quality, a higher level of performance, a far more capable screen, as well as a stronger battery than the S3, which means that if you can afford it, you should get it sooner rather than later!

If you however are not convinced by neither of these two ultrabooks, check out our article listing all the top choices at the moment and I guarantee you will find something suited for your needs!

Disclaimer: Our content is reader-supported. If you buy through some of the links on our site, we may earn a commission. Learn more.
Adrian has a passion for technology and portable computers and he's been writing about mobile devices for many years now. He is in charge with the news here on the site, but sporadically he also contributes with tests and reviews.
← Previous Story LG XNote Z330 ultrabook unveiled: premium design, features and price tag!
Next Story → Lenovo U300S vs Asus Zenbook UX31 – quick comparison