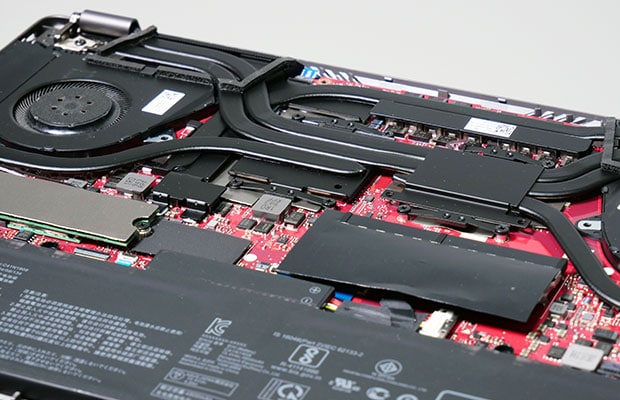 As you might be aware, single-channel RAM notebook configurations experience a significant drop in gaming performance compared to a dual-channel implementation with similar specs, due to how the recent Windows installments manage memory on dual-graphics laptops that get both an iGPU and a dGPU.

With that in mind, many of the base-level gaming laptops available these days get a single stick of RAM which works in single-channel. Knowing that, we’re going to have a look at how single vs dual channel memory impacts the benchmarks and gaming performance on the Asus ROG Zephyrus G14, with a Ryzen 4800HS processor.

Keep in mind that our test-unit is the GA401IV model with RTX 2060 graphics (reviewed here), and comes with 16 GB of DDR4 3200 MHz running in dual-channel out of the box.

However, for the purpose of this test, we’ve removed the included 8GB stick and left the system running on just the 8 GB of soldered memory on single-channel, which is in fact what you’ll get with the base-level configuration of the G14, such as the GA401IH version.

Furthermore, our findings should be consistent for other AMD Ryzen 4000 configurations that ship with only 8 GB of RAM, such as base model TUF Gaming A15 and A17, as well as the Zephyrus G15.

With that out of the way, here’s a look at some benchmarks results, on the Turbo profile in Armoury Crate.

The impact varies between these tests, from almost none in some cases, to as much as 20-25% in others. Of course, some of the differences are also caused by the increased amount of RAM on the dual-channel configuration, so take that into consideration as well.

As far as I know, tests such as Cinebench or Blender are not as dependant on memory channels, so we haven’t run them on this laptop. We’ll include them in a future version of the article that takes a deep look at the Ryzen 4800H/4600H platform, and update this article as well if necessary.

With these out of the way, let’s dive into those games. We’ve run a handful of different titles on DX11, DX12 and Vulkan, on the Turbo profile available for the Rog Zephyrus G14 GA401, and on both FHD and QHD resolutions.

Here’s what we found out.

Looking at the FHD Turbo results, titles such as Battlefield V, Witcher 3 or Red Dead Redemption show little variation between the Dual and the Single channel versions, while the Tomb Raider games or Far Cry 5 show a 10-25% increase in fps counts with dual-channel RAM.

Jumping on to the QHD resolution, the differences get even smaller between the two implementations, with Witcher 3 being pretty much the only title that shows a significant decrease in the single-channel configuration.

It’s not an expensive upgrade and something you can easily do yourselves in most cases, and you’ll find out how to from our reviews, which, among others, explain how to open the laptops and access the internals.

Disclaimer: Our content is reader-supported. If you buy through some of the links on our site, we may earn a commission. Learn more.
Andrei Girbea, Editor-in-Chief. I've been covering mobile computers since the 2000s and you'll mostly find reviews and thorough guides written by me here on the site.
← Previous Story Acer Predator Triton 500 (PT515-52) and Nitro 5 (AN515-55) 2020 updates – what to expect
Next Story → AMD TUF Gaming A15 FA506IU review (GTX 1660Ti 80W, Ryzen 5)