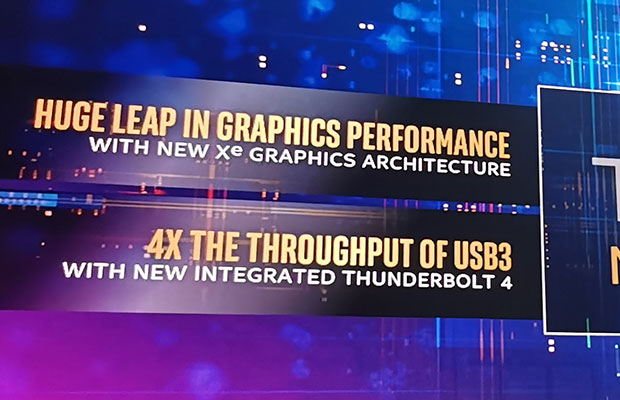 Coming out of CES 2020, this year looks like it’s AMD’s time to shine. For a very long time now, perhaps even for the first time ever, their hardware is finally going to be a competitive option in the notebooks’ segment, if their 7nm Ryzen 4000 Mobile platforms deliver on what they promise.

Yet Intel isn’t sleeping, and while their current 10th gen platforms might struggle, their next-gen TigerLake built on 10+ nm technology promises to catch up.

There’s no exact timeframe for Tiger Lake, other then “it’s coming this year”, yet with no guarantee. But there were still a few interesting details quickly mentioned in Intel’s CES Keynote that I’d like to touch on:

As of right now, the Thunderbolt 3 controller supports up to 40 Gbps peak bandwidth (bidirectional), but 8 Gbps are exclusively reserved for video, so that leaves up to 32 Gbps for PCIe traffic, which is the equivalent the PCIe 3.0 x4 connection reserved for Thunderbolt 3. But that’s not all, as the actual usable PCIe bandwidth is around 22 Gbps, the rest being reserved for DP even when not in use (see the schematic on page 6, here). And of course, in real use, the actual utilized bandwidth is far from that 22 Gbps max-possible.

So where does this leave Thunderbolt 4? Well, the main limitation of TB3 is due to the 32 Gbps bandwidth of the PCIe x4 connection, and Tiger Lake is supposed to switch over to PCIe 4.0 support, which doubles the theoretical throughput. Hence, the 80 Gbps touted in the presentation, with the addendum that you’re not going to be able to use that entirely in real-life. Furthermore, Intel might also choose to implement PCIe 4.0 x8 support with future platforms, but that’s probably not going to happen with Tiger Lake.

Nonetheless, Thunderbolt 4 should address one of the main issues with Thunderbolt 3, and that’s eGPU use. Right now, the performance is fine as long as you’re not sending the signal back from the eGPU to the laptop’s internal screen, but rather to an external monitor hooked into the eGPU enclosure. If you do, the video feed takes priority over PCIe, limiting its bandwidth and performance; the loss is greater with a higher resolution display and especially an issue for higher than 4K screens or dual-setups.

As for the performance gains, Xe graphics should show a significant bump even over current IrisPro options in the IceLake processors, but I’m not sure what to tell about the double-digit performance gen on gen. Intel’s 10nm yields seem far from what we expected, and based on what we’re seeing with IceLake, there’s barely any improvement in both IPC or efficiency, despite the lower clocks.

Not to mention IceLake are only available in quad-core implementations, while Comet Lake is available with 6C, 12 T in the i7-10710U, which trumps the i7-1065G7 in every CPU demanding load. I’d reckon the only way Tiger Lake would significantly improve over IceLake is if Intel delivers on six-core 10nm implementations, but even so, AMD’s Renoir promises 8-cores (without SMT) in the 15W Ryzen 7 4800U, as well as beefy graphics, all for late-Spring 2020. In other words, Tiger Lake will come months later, at best, and might not even be able to compete.

Anyway, we’re living interesting times where AMD and Intel finally fight neck in neck for our money across the board, not just in budget builds, and that can only lead to progress.

We’re going to further update on Thunderbolt 4 and Tiger Lake as we find more about them in the following months, so stay close.

Disclaimer: Our content is reader-supported. If you buy through some of the links on our site, we may earn a commission. Learn more.
Andrei Girbea, Editor-in-Chief. I've been covering mobile computers since the 2000s and you'll mostly find reviews and thorough guides written by me here on the site.
← Previous Story Eluktronics MAX-15/MAX-17 – lightest full-performance gaming laptops, vs MAG 15 and MECH 15/17
Next Story → Asus ROG Zephyrus G14 GA401 – AMD and RTX 2 in a 14-inch gaming notebook