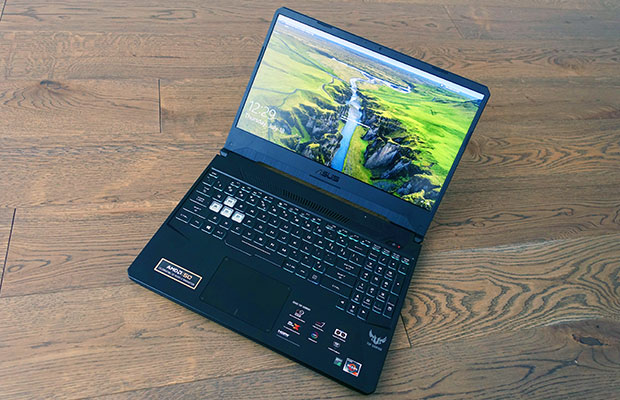 Since we’ve recently tested both the RTX 2060 and the GTX 1660Ti configurations of the budget-friendly Asus TUF Gaming FX505 gaming laptop, in this article we’re going to compare the small differences between the two variants, to help you easier choose between them.

Configurations are going to vary between regions, what we’re looking at are variants with the 120 Hz display, the AMD Ryzen 7 3750H processor, dual-channel RAM and SSD storage. These latter two aspects have a significant impact on the performance, so I suggest making sure to have them in your units, even if it requires upgrading the configuration you already bought.

In terms of design, build, keyboard and screen, the two FX505 variants are mostly identical, and you can read our detailed impressions in this review.

However, I have to mention that the FX505DU tested earlier this year came with a slightly different variation of the 120 Hz Panda panel, which proved brighter and a little richer than the option on the latter-launched FX505DV. I can’t tell for sure whether that’s the case with all the retail versions, but our RTX 2060 configuration seriously struggled outdoors, in bright light. So keep it indoors. 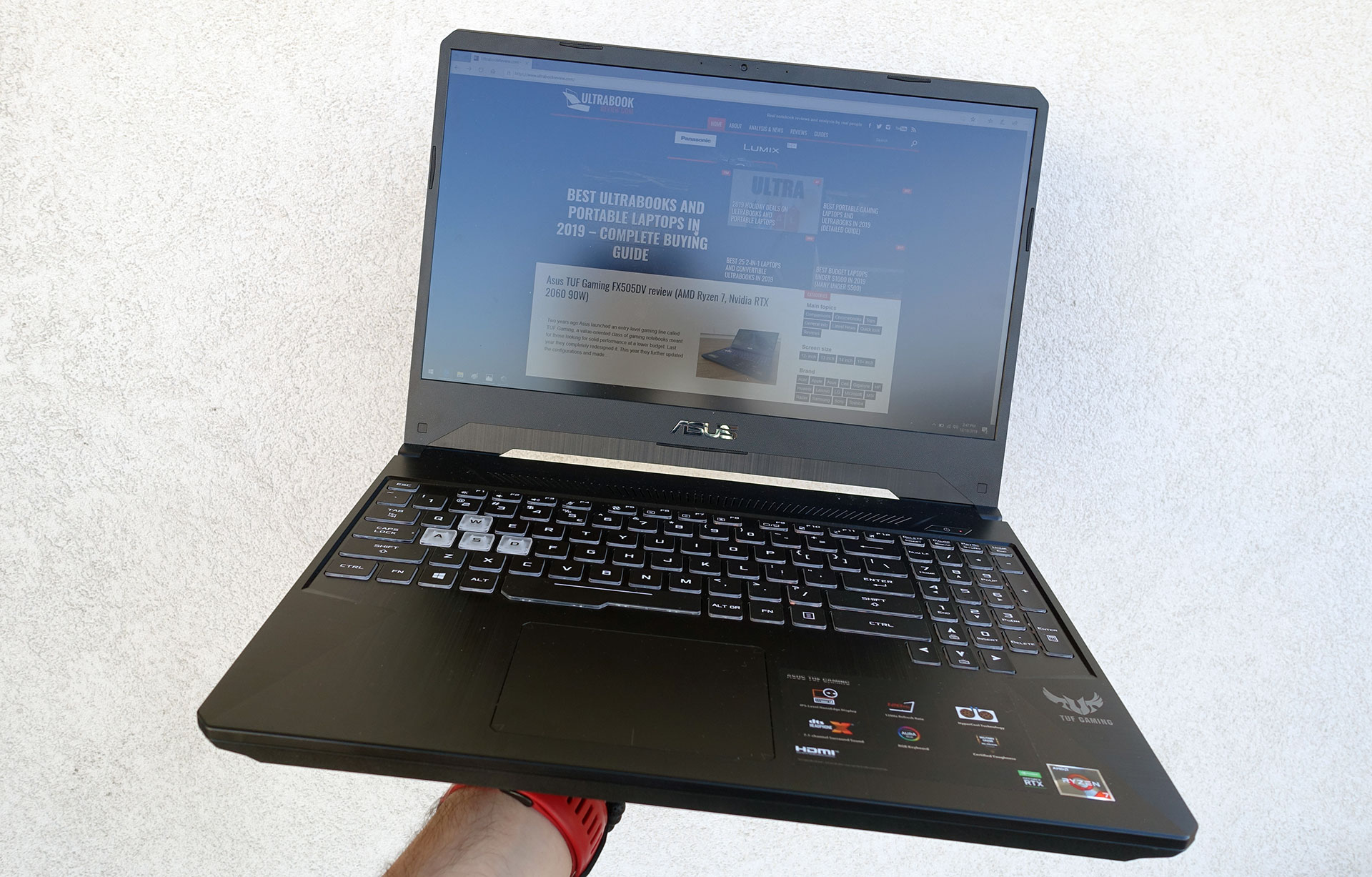 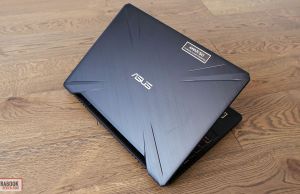 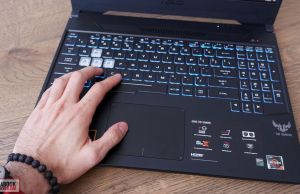 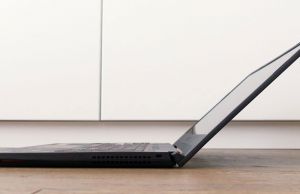 The hardware specs are the main differences between the FX505DU and the FX505DV versions, and even those are rather small. Check the specs sheet below for a quick glance, and we’ll further get in depth below.

With the slightly more powerful GPU, you might have noticed that the FX550DV also comes with a larger and heavier power brick, something to consider if you plan to grab the laptop along every day to school or work.

But is this compensated by the real-life performance?

Of course, both these notebooks can handle daily multitasking, browsing and video content just fine. They perform smoothly, run coolly and fairly quiet, and last for between 3-5 hours of battery life on a charge. The fans never turn completely off, but they’re only audible in quiet rooms and we haven’t noticed any coil whine or other sorts of electric noises that would impact the experience.

As for the more demanding loads, the quad-core Ryzen 7 APU is not as powerful as the six-core Intel i7 you can get on other mid-range laptops, and looses to the quad-core i5s in most cases as well, but by a small margin.

One of my main nits with this platform is the inability to tweak and undervolt the processor, which would help both performance and thermals, and it’s something you can do in several ways on the Intel options.

The other is the platform’s overall impact over real-life gaming results, and let’s touch on this important aspect before we move to something else.

To make things a little bit simpler to follow, down below we’ve gathered the gaming results we got on these two FX505 samples on the highest performance setting (Turbo), without messing with the GPU in any way.

First of all, you’ll notice that both these laptops are able to run our test games well at FHD resolution and Ultra settings, but you’ll want to trim down to the graphics settings to get the fps counts towards the screen’s 120 Hz limit.

Then you’ll notice that the 1660Ti variant is only within 10-15% of the RTX 2060 model in most games, despite the extra processing units and higher power allowance of the latter. In fact, the FX505DV gets the same RTX 2060 chip you’ll find on much more expensive gaming notebooks like the Asus ROG Scar III or the MSI GE65 Raider, but not the same kind of performance.

Finally, you’ll also notice that overclocking doesn’t majorly impact the results, and that’s especially the case with the RTX 2060 variant.

The explanation is fairly simple: thermals. The logs below show what to we got on both variants with Witcher 3 and FarCry 5 on the stock and overclocked profiles: 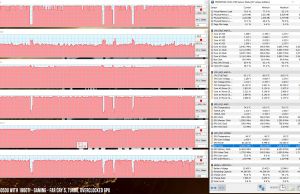 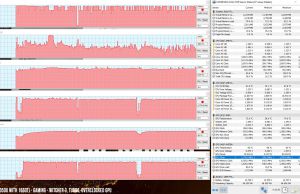 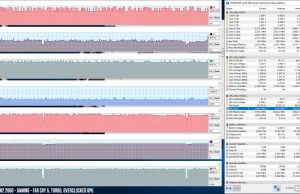 The GPUs run hot inside both these notebooks, at 80-85 degrees in demanding titles, and there’s very little room to improve on the scores at this point. Overclocking pushes these temperatures even further, and it’s not something I’d recommend on either of these notebooks. In fact, I’d rather undervolt the GPUs with Afterburner in order to limit the temperatures and prevent any unwanted surprises over time, as high-heat and electronics don’t do well together.

For what is worth, it’s important to mention that Asus slightly tweaked the thermal module on the later-released TUF FX505DV with RTX 2060 graphics, adding an extra heatpipe on top of the VRMs and MOSFETs. I reckon that’s in order to address the occasional stuttering we’ve encountered on the 1660Ti model back in summer, which has also been reported by various buyers on Amazon or on Reddit. 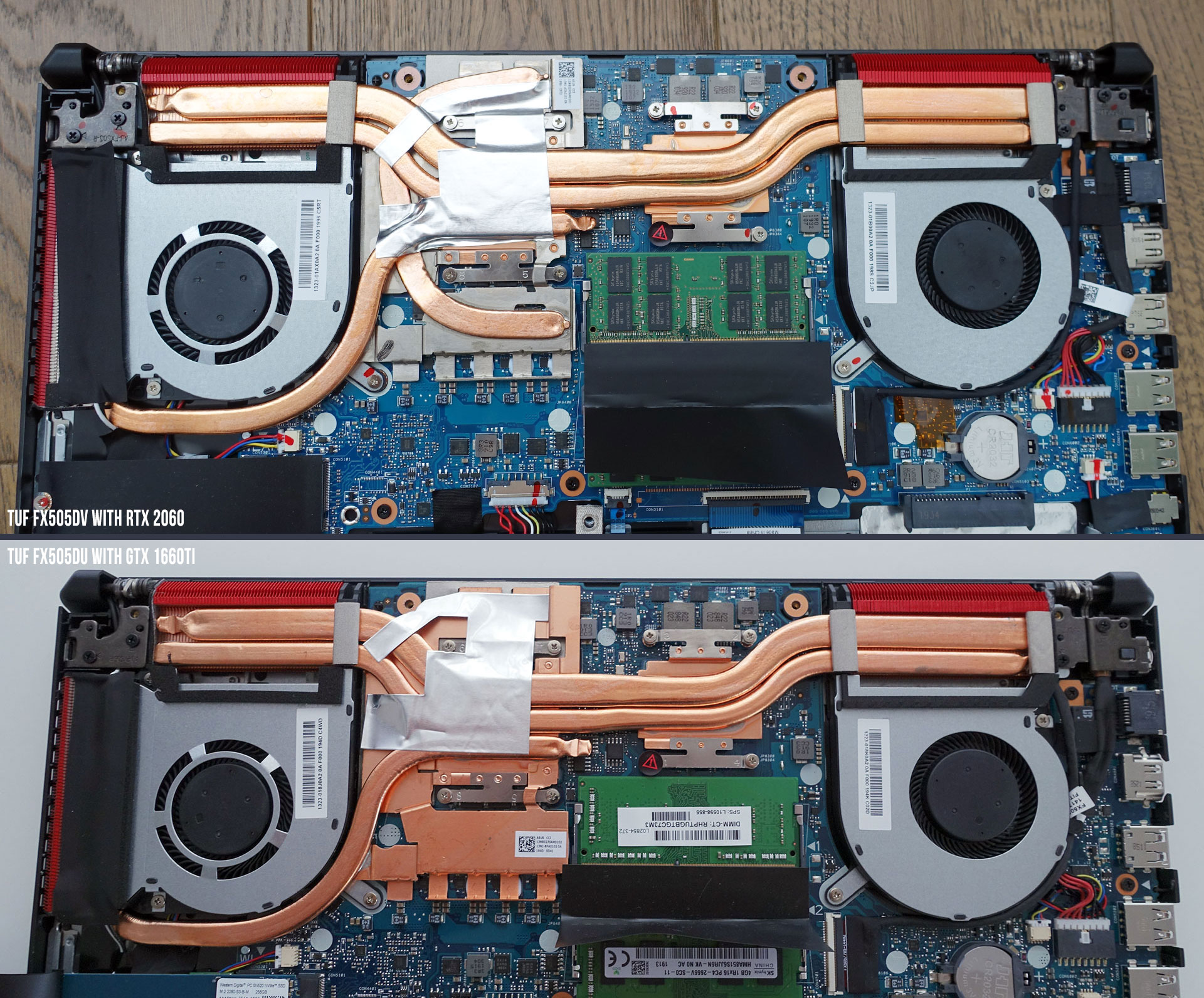 Overall, this design tweak and the latest BIOS updates ensure an overall smoother experience on the RTX 2060 version of the TUF Gaming FX505, without any stuttering and even slightly lower CPU temperatures in games.

As for noise-level and outercase temperatures, both variants measured nearly the same in our tests, with fans ramping up to about 47-48 dB and most of the games keeping only warm, except for the bottom-part around the GPU, that hits temperatures in the low 50s.

Moving on, to paint a complete picture on these two notebooks, I’ll also add our results on two budget-friendly Intel-based gaming computers: the Lenovo Legion Y540 (with Core i5 CPU, RTX 2060 80W graphics) and the MSI GL63 (with Core i7 CPU, GTX 1660Ti graphics).

This comparison is not meant to weigh in the overall value of these products, but only on their gaming abilities, and the main thing to take out of this is the fact that many games favor the Intel platform over AMD Ryzen. The Intel notebooks are nonetheless more expensive products and have their own share of strong points and issues, thus I’d advise you to read our detailed reviews for the complete picture.

These being said, let’s also pitch these products against each other in a few different synthetic benchmarks, on each laptop’s default Max performance setting, without any applied tweaks:

In this case, the results are a lot more inline with each unit’s hardware specs, and that means the RTX 2060 90W GPU in the TUF FX505DV beats the other options in GPU scores, while the Ryzen 7 processor comes close of the Core i5-9300H and looses badly to the six-core i7.

Tweaking the CPU/GPU further helps the Intel variants, due to better thermals and the ability to undervolt, and you’ll find what you can get on each unit from the reviews.

As you’ve seen above, though, these results don’t translate in games, that’s why I think it’s important to also consider the slightly more expensive Intel-based products when considering one of these TUF Gaming GX505 models.

Among those, there are the Lenovo Legion Y540 and MSI GL63 mentioned above, but also the Asus ROG Strix G, the Acer Nitro/Predator Helios 300, the Dell G3 or the HP Pavilion/Omen Gaming 15. Based on the prices and configurations available in your regions, you might get better value with one of those for only a bit extra. At the same time, though, the TUF Gaming units might just be significantly cheaper and justify the difference in performance.

As for which of the two FX505 is worth your hard-earned buck, if you decide to go with one after all, that’s a rather difficult question to answer.

Given the stuttering we noticed on the RTX 1660Ti model back in the summer, I’d surely recommend opting for the newer version with the slightly tweaked thermal module. At the same time, though, stuttering wasn’t a widespread problem, and the performance gain of the RTX 2060 variant is so small that it might not be worth paying extra for.

However, from what I’m seeing in stores, most stores primarily list the TUF FX505DV with the RTX 2060 graphics these days, both in Europe, UK and the US, which might suggest the older 1660Ti variant is quietly replaced with this newer option in recent months. That makes your choice simpler, but if the two are still available where you live, I’d go with the 505DV if they’re withing 100 USD/EUR of each other for similar specs. Follow this link for updated prices and configurations at the time you’re reading the article.

Disclaimer: Our content is reader-supported. If you buy through some of the links on our site, we may earn a commission. Learn more.
Andrei Girbea, Editor-in-Chief. I've been covering mobile computers since the 2000s and you'll mostly find reviews and thorough guides written by me here on the site.
← Previous Story Lenovo ThinkPad P73 review (Core i9-9880H, RTX Quadro 4000)
Next Story → Razer Blade 15 quick review, with optical-mechanical keyboard, 240 Hz screen and RTX 2070 GPU