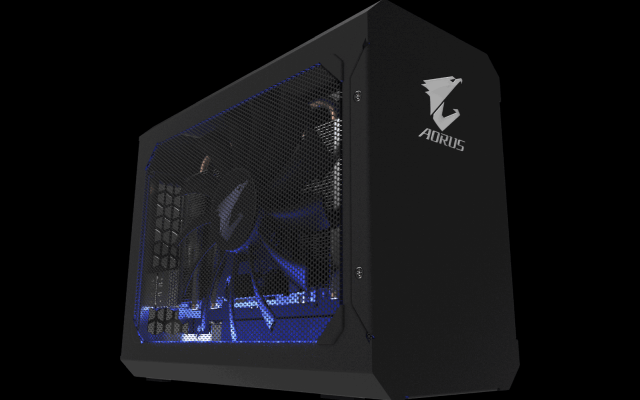 Ever since I Jury-rigged my XPS 15 9550 to the first Razer Core back in 2016, I’ve made use a few different of Thunderbolt 3 eGPU setups over the years. I’ve done quite a bit of mixing and matching of various eGPUs (Razer Core, Mantiz Venus, Aorus Gaming Box) to different computers, from dual-core NUCs to hexa-core laptops, so I thought I’d share my experiences with different combinations of eGPUs and laptops to review their compatibility. I will be starting off with my current setup: an Aorus RTX 2070 Gaming Box and a Lenovo ThinkPad X1 Extreme (Gen 2 review here).

I’ve been using the Aorus Gaming Box for about a year now and have used it with multiple laptops in that time, but primarily the ThinkPad X1E/P1. As these kinds of setups are quite complex in terms of modern PC peripherals, we’ll be dividing this review into three parts: The Aorus RTX Gaming Box itself, eGPU compatibility with the X1E/P1 chassis/mainboard, and an overall evaluation of the setup. The focus here is mostly on the overall experience rather than performance, as I believe the performance of eGPUs over TB3 is fairly well established. 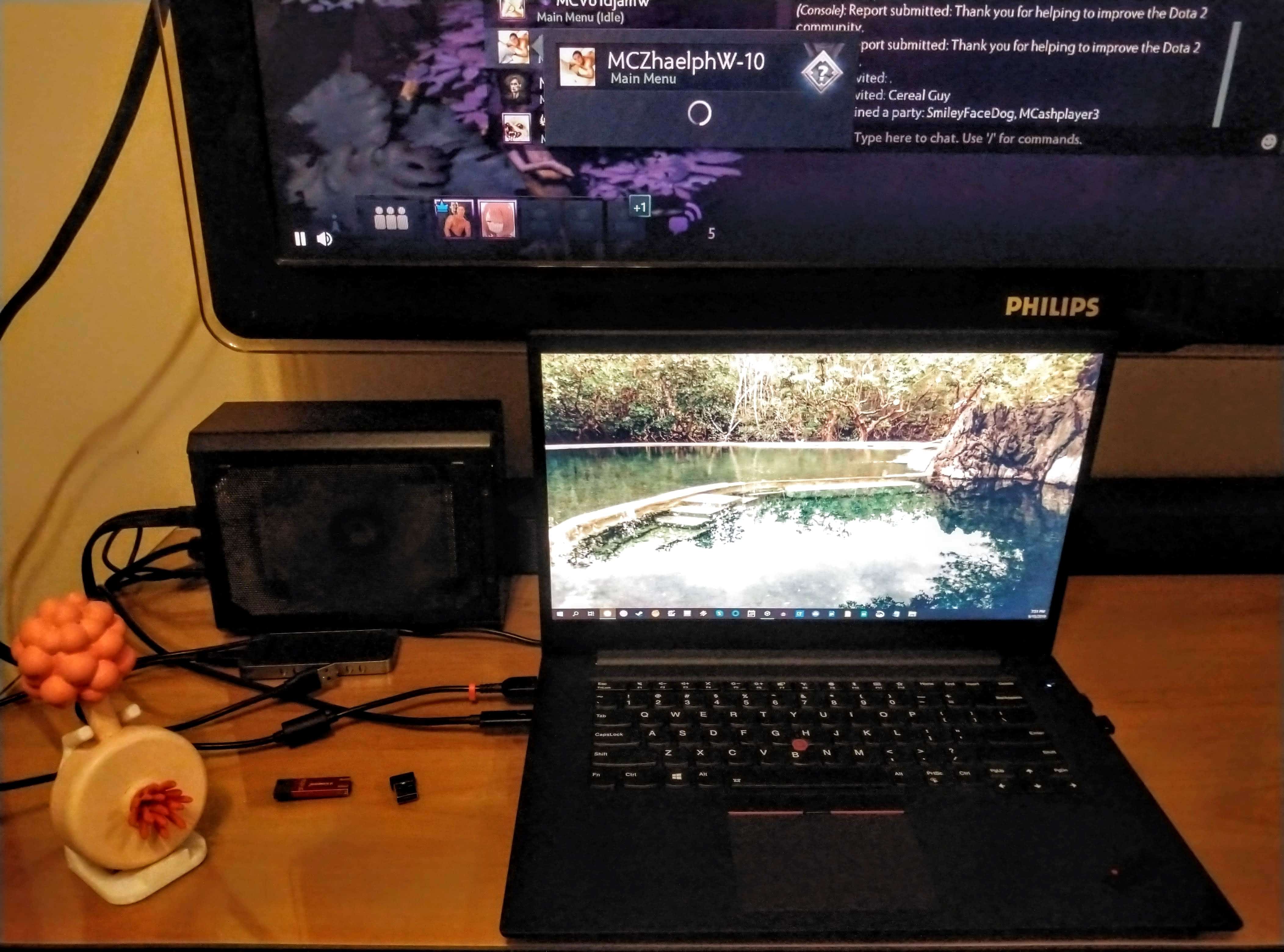 The Aorus RTX 2070 Gaming Box is one of the smallest eGPUs on the market, and that’s because it uses a custom “mini” single-slot-sized Nvidia RTX 2070. Despite it’s tiny size, there’s a fair amount of input including 3 DisplayPort 1.4, 1 HDMI 2.0b, 4 USB 3.0, 1 USB-C (VirtualLink for VR headsets), and 1 Thunderbolt 3 cable (for connecting the PC and powering it with up to 90W, I believe ). Impressively, the power supply is still internalized in the case, as well. Its compact design and dimensions make it an excellent choice for a traveling setup. For other pluses, the fans are not too loud both when idle and gaming, and you can configure the enclosure’s LED lighting with software downloaded from Gigabyte (if you’re into that kind of thing).

Performance with the GTX 2070 is just what you’d expect for an eGPU. At 1080p, you can expect around 80% the performance of a “regular” RTX 2070 laptop, with the performance gap narrowing the more the GPU is taxed. As notebookcheck notes, when running 4K games or benchmarks, framerates between the RTX 2070 eGPU and a direct RTX 2070 connection are within ~5% or so of each other.

Sounds perfect then, right? It’s super small and portable, has plenty of ports (which function without connection issues, I should add), and isn’t that expensive considering you get everything in the package together. There’s just one problem with the Aorus Gaming Box, and it’s an annoying one:

Whereas my Mantiz Venus never failed to turn on and function perfectly with any laptop upon inserting the TB3 cable from the eGPU to the host machine, the Aorus Gaming Box seems to have a frequent problem connecting after being disconnected for any reason. Whether you safely disable the external GPU or hot-unplug it, the next time you try to plug the eGPU in, nothing will happen. This has been documented in detail at eGPU.io but the general consensus is that it may be caused by a small capacitor integrated into the wiring of the power cable. In order to get the eGPU to reconnect, you need to pull the power cable out from the eGPU for around 15-20 seconds first. Upon fully cycling the power of the eGPU (there is no switch, it must be unplugged from its power supply), it will reconnect to the host device.

Once you understand how to fix the issue yourself, it isn’t that bad. But it is still quite frustrating to have to do on occasion after putting your laptop to sleep or shutting it down, and it effectively makes it less of a “plug-and-play” solution and more of one that you’ll need to tinker with once or twice a day at least.

Another unfortunate aspect of the Gaming Box is that it seems that Gigabyte/Aorus have little interest in fixing this bug with a firmware update, as the last updates were released in March of 2019. For a device that still sells for ~750 USD, Gigabyte needs to show a better commitment to supporting such an expensive product that suffers from such a widely reported and inconvenient issue.

It’s no secret I love the design and ethos of the ThinkPad in general and I rated the X1E Gen 2 as one of the best laptops I’ve ever owned. However, from the standpoint of an eGPU user, there are some issues with the platform that affect its usability with eGPU setups. For the record, these issues have reared their heads on the X1 Carbon Gen 6, P1 Gen 1, and X1E Gen 2, but seem to be most prevalent on ThinkPads with dedicated GPUs. Compared to machines like the Dell XPS 13/15, I think this may have something to do with Lenovo having less experience making BIOSes for machines that were designed to run with eGPUs than Dell. In contrast, Dell’s long history with the Alienware Graphics Amplifier may have given their engineers a running start in terms of eGPU compatibility.

What kinds of problems do I run into? Firstly, there’s the simple issue of getting an error if you plug in the eGPU without disabling the internal GPU first. If you don’t do that, the machine seems to have an issue allocating hardware resources. It’s not too big of an issue, but it is a required step. You can’t just leave the internal dGPU disabled, either, as if you do so you will experience a continual power drain while on batteries.

Secondly, after switching from the eGPU to the dGPU, I get an “Error 43” every time and need to go to the device manager and uninstall the graphics drivers for the card that is not functioning. Once the drivers reinstall themselves automatically, however, the card will work just fine without having to restart.

The third issue is that of graphical “hitching” that occurs on my external display attached to the eGPU whenever the internal display is off. All graphical output freezes for a split second regardless of app or content. In order to resolve the issue, I need to go to the device manager and disable then re-enable the Intel HD630 graphics device. The problem reappears after waking from standby or restarting the computer, however.

I like the tiny size and feature set of the Aorus Gaming Box, but the connectivity issues that stop it from being truly “plug and play” are frustrating when they prevent the smooth operation of your computing/media setup. The whole idea of an eGPU setup is that you can take your laptop with you quickly and easily while also allowing a convenient single-cable connection to a large-screen gaming or media setup at home. When the Aorus Gaming Box works, it works well, but I have to recommend the Mantiz Venus instead of what is a setup that always “just worked” for me.

The X1E Gen 2 is a great laptop on its own, but it’s also not the best candidate for an eGPU setup because of the issues outlined above. Those issues in conjunction with the Aorus Gaming Box’s quirks mean you have to do a bit of fiddling each time you disconnect/reconnect it. If you’re looking for a laptop that will be more compatible with eGPUs in general, you’ll probably want one that doesn’t have a dGPU so you won’t need to worry about disabling and reenabling devices. The Dell XPS 15 (though it has a dGPU) and XPS 13 are my picks for highly compatible eGPU notebooks, with the XPS 13 being the most reliable of the two.

Disclaimer: Our content is reader-supported. If you buy through some of the links on our site, we may earn a commission. Learn more.
Douglas Black is a Technical Writer, Analyst, Teacher, and DJ currently based in North Carolina.
← Previous Story New ThinkPad X1E Gen 2 BIOS update (1.26) makes it faster than the XPS 15 7590
Next Story → Lenovo ThinkPad P73 review (Core i9-9880H, RTX Quadro 4000)