Sony recently launched the Vaio Pro lines of premium ultrabooks and there are two distinct members in this family, the 13 inch Pro 13, and the smaller 11.6 inch Pro 11.

And while the two share plenty of common traits, the more compact Pro 11 does have some particularities over the 13 inch version. You’ll find out all about them from this article and the video embedded below.

Is worth noticing however that Sony are stepping on the lines of some of their rivals, like Apple with their MacBook Airs, Asus with the Zenbooks, Acer with the Aspire S series and so on. In other words, their main performer is the 13 inch Vaio Pro, while the 11 is a lighter, more compact version, that packs similar hardware, but a smaller battery and less features.

Anyway, have a look at the video for more details on the main differences between the Sony Vaio Pro 13 and the Pro 11. Then read the rest of this post and if you have any questions or things to add, I’ll be waiting for your input in the comments section at the end.

Design wise, the two are nearly perfect twins. In fact, we could say that the Pro 11 is a miniaturized version of the Pro 13. Carbon fiber is used for the bodies in both cases and the two offer the same angular design. But while the 13 is very light, weighing under 2.4 pounds, the 11 inch version goes under the 2 pounds mark. In both cases though, the light weight comes along with an over flexible body, that squeaks and bends quite annoyingly. However, the Pro line was specifically designed to be flexible, according to Sony officials, so it can take bumps and shocks. Hopefully, they’re right.

Moving on, even the interiors are almost identical on these machines, but with the 11 being smaller, that leads to a more compact trackpad and keyboard. The trackpads offer similar feedback, with the same rougher finishing, and both are decently good, but have some glitches when it comes to handling taps and two finger scrolling. The keyboard on the 13 inch Pro is surprisingly accurate and comfortable to use. The one on the Pro 11 does offer smaller keys, and while I still found it good enough, those of you with bigger fingers might consider it a bit too cramped.

Having a look on the sides, you’ll notice the the Pro 11 offers the same ports and connectors as the Pro 13: two USB slots, a Full size HDMI port and card-readers. On the 11 inch Pro though, the card-reader is placed on the front side, not on the right like on the Pro 13. In both cases, Sony bundles the Pros with a Wireless Dongle that attaches to the power brick and an HDMI to VGA extension cable.

The two Pros both offer 1080p IPS touchscreens. The one on the Pro 11 measures 11.6 inches in diagonal, while the one on the Pro 13 has 13.3 inches, so it is slightly larger. They are incredibly sharp, offer good colors and contrast, but because of the glass on top of the screen, suffer from some reflections in strong light and some image quality degradation when not looking at them straight on.

Internally, the two laptops are once again nearly identical. Both are powered by Intel Haswell ULV hardware platforms, with Core i5 and i7 options to pick between. The 11 inch Pro can be bundled with up to 4 GB of RAM and 256 GB SSD storage, while the Pro 13 can take up to 8 GB of RAM and a faster 512 GB SSD. 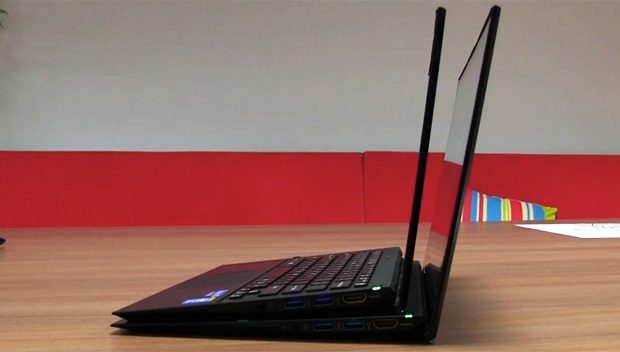 The 11 is a miniaturized version of the Vaio Pro 13

Both laptops can handle most everyday tasks at ease, multimedia and even some lighter games if needed, although they are not specifically designed for that. If you’re interested in gaming ultrabooks, see this other article here on the site. The 13 runs cool and quiet most of the time, while the 11 can get a bit warmer and noisier when pushed. Otherwise, while handling daily activities, it’s a breeze as well.

The Pro 11 bundles a smaller battery than the 13, and that will only keep it running for an average of 5 hours of daily use. The Pro 13 lasts about 6 in similar conditions, but in both cases you will get more if you’re using the laptops lightly, with the screens dimmed down.

All in all, both the Sony Vaio Pro 13 and the 11 are very good ultrabooks. The 11 inch version does have some shortcomings compared to its larger kin, with the more cramped keyboard and trackpad, the fewer hardware options and the extra heat and noise when pushed. That’s why for the average user, the 13 is going to be the smarter pick. But if you really want something compact and very light, under 2 pounds light actually, the Vaio Pro 11 will not disappoint.

All these being said, it’s time to wrap up this post. Let me know if you have any questions and in the meantime, you should read my detailed review for the Sony Vaio 13, my full coverage of the latest Sony Vaio ultrabooks and some of the other posts on the site, I know you’ll find them very useful if you’re in the market for a brand new ultraportable these days.

Disclaimer: Our content is reader-supported. If you buy through some of the links on our site, we may earn a commission. Learn more.
Andrei Girbea, Editor-in-Chief of Ultrabookreview.com. I've been covering mobile computers since the 2000s and you'll mostly find reviews and thorough guides written by me here on the site.
← Previous Story Asus Zenbooks with Haswell: Zenbook Infinity and Zenbook Touch UX31A LA
Next Story → Sony Vaio Duo 13 – specs, prices and quick comparison to the Vaio Duo 11