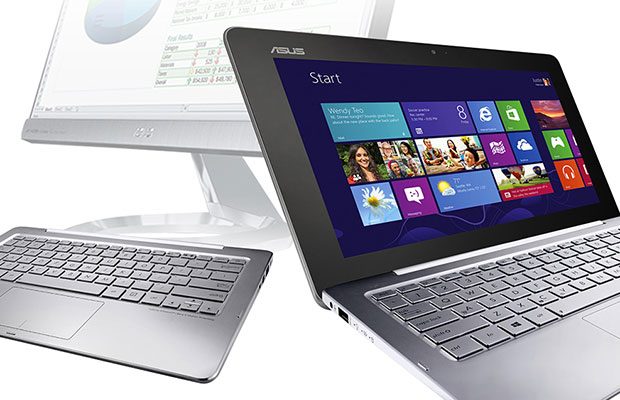 While the Asus Transformer Book TX300 just recently hit the stores in only a handful of countries, it looks like Asus are already working on several followups for that particular unit, based on what they displayed on the showfloors at Computex and their Press conference over there.

Now, it’s not like I wasn’t expecting a successor for the TX300, which is afterall only an Ivy Bridge powered tablet hybrid. I was, but bare in mind the new unit is still not available yet, it will probably be around September or so. But if you thought about buying the existing TX300, there are reasons to hold off. And reasons not to, as you’ll see from the lines below.

However, while details are very scarce for now, it really looks like the T300 is a downgraded version of the TX300, that won’t address any of the issues of the current generations. Design wise, as you’ll see from the hands-on video embedded below, from the guys at Mobilegeeks, the T300 is also a step down from the TX300. The slender aluminum body was replaced with a glossy plastic case, and the entire thing seems thicker than the TX300 was.

The dock is new as well, at least based on the model displayed at Computex. The one on the TX300CA included a HDD, an extra battery and some ports, plus the keyboard. This particular dock for the new T300 is a lot simpler and ditches everything but the keyboard and trackpad. Not sure why Asus went down this road, but hopefully they will offer a more fully-featured dock as well and this is just an option meant to bring the price down for the T300, given how the TX300CA sells for more than 1500 USD these days.

The hardware inside is new: several Haswell configuration options, although we don’t know for sure which exactly will Asus pick for this unit. But I’m expecting some Core i3,  i5 and i7s. Of course, the biggest gain with Haswell is battery life, and with a 50 Wh battery inside the tablet, that could translate in 8+ hours of everyday use on a charge, which sounds very good. We’ll see.

Those being said, the Asus Transformer Book T300 is not the awaited successor for the TX300CA. It ditches metal for a plastic body, it offers a dumbed down port and there’s still no digitizer support, something many asked for on the TX300. Asus did add a microUSB port on the slate at least, which was also missing on the current generation. But I doubt that’s enough to make those looking at the TX300CA interested in the T300.

Still, with a proper price tag along $1000 or so, there will be a market for it. What do you think?

However, while the Transformer Book T300 might not be a ground0breaking device, the Transformer Book Trio concept also showed off at Computex surely is. However, bare in mind that this is still far from a final product and there might be a while until we’ll be able to buy something like this.

Long story short though, the Asus Transformer Book Trio bundles two processors and two different operating systems in a detachable laptop-like design. The “screen”, that’s actually a stand-alone tablet, houses an Intel Atom Z2580 processor, up to 64 GB of storage and an 11.6 inch Full HD touchscreen. The dock houses an Intel Core i7 4500U processor and up to 1 TB of storage. On top of that, each has its own batteries, with a combined capacity of 50 Wh.

The tablet alone will run Android. Having the tablet latched to the docking will change the operating system to Windows, but it’s still unclear if you will be able to use Android in this mode as well. We do know however that Windows on the tablet is not a possibility. And we also know that the docking could be use as a standalone computer of its own, when connected to a monitor. But there are still plenty of questions that need answers.

Among them, there are those regarding the price or a potential launch date. Asus didn’t say anything about those, and knowing how “fast” they moved in the past, if we were to see this concept materialize, it will probably won’t happen this year.

That’s about it for now. We don’t know much about the Asus Transformer Book Trio right now, but we’ll update this post once we do. In the meantime, let me know what do you think about it. Imho, having an 11.6 inch all-in-one computer that can act as a tablet, desktop and as a laptop at the same time really sounds great. If done well and proper priced though…

Disclaimer: Our content is reader-supported. If you buy through some of the links on our site, we may earn a commission. Learn more.
Andrei Girbea, Editor-in-Chief. I've been covering mobile computers since the 2000s and you'll mostly find reviews and thorough guides written by me here on the site.
← Previous Story Sony Vaio Duo 13 – specs, prices and quick comparison to the Vaio Duo 11
Next Story → Sony Vaio Pro 13 review – great Haswell business ultrabook