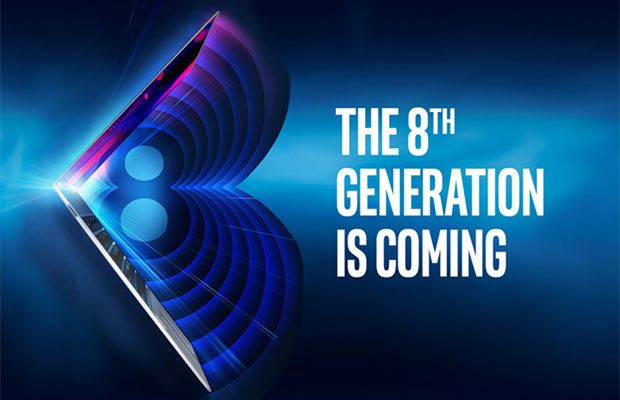 As of late August 2017 Intel announced the first quad-core eight-thread platform designed for ultra-portable computers. The CPUs in this line are sold as 8th generation processors, although in reality they are an update of the 7th generation hardware line and are called Kaby Lake-R (efresh). According to Intel’s new naming policy, the 8th gen series includes these KabyLake-R CPUs already released, but also the Coffee Lake and Canon Lake CPUs that will be released in the future. However, that shouldn’t matter much to you as a potential buyer.

The platform’s particularities on the other hand should, and we’ve already spent time with two laptops (Acer Spin 5, Asus Zenbook UX331UN) built on the entry-level processor of the 8th gen line, the Core i5-8250U. The paragraphs below include our impressions, benchmark results and comparisons to the existing Core i5-7200U and i7-7500U CPUs.

But first, here’s what you should know about the Kaby Lake-R platform. It includes 4-core 8-thread Core i5 and i7 processors built on a revised 14+ nm lithography, with a TDP of 15 W and support for up to 32 GB of up to DDR4-2400 memory. They also integrate the same Intel HD 620 graphics chip that’s part of the dual-core KabyLake processors. However, in order to accommodate the 2x number of cores, the default speed per core is lower on the quad-core models, with Turbo Speeds compensating for that with most loads, and as you’ll see below that’s both a fast performing and an efficient solution.

The Kaby Lake-R CPUs will make it into a large numbers of ultraportable laptops and mid-tier full-size notebooks, with or without dedicated graphics. We compiled a full list of all these laptops in this dedicated article.

With that in mind, let’s get to the main topic of this article, the Core i5-8250U processor. You’ll find the important technical specs below. 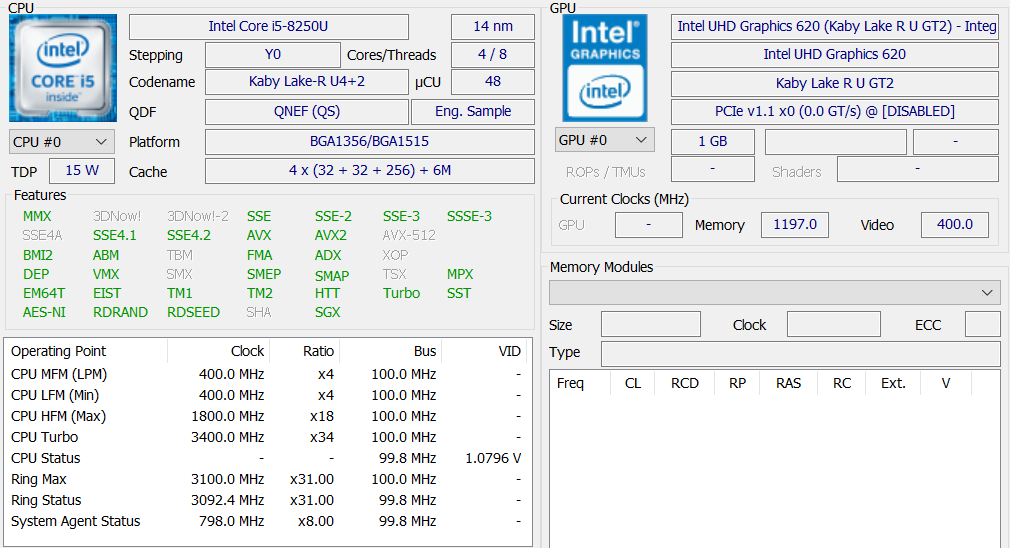 And here’s how it compares to the dual-cores and the Core i5-7300HQ, the closest quad-core alternative available until now.

Alright, so compared to the i5-7200U and the i5-7500U, the newer i5-8250U has two more cores and four more threads, more Cache memory and slightly faster Intel HD 620 graphics capable of reaching marginally higher Turbo Speeds. The base CPU frequency on the other hand is much lower, but the Turbo Speeds are comparable or improved over the dual-core i5s and i7s, and that’s why the i5-8250U is a match for the dual-cores in terms of single-core performance and a big step-up in multi-core activities. More about that in a bit.

Compared to the i5-7300HQ, the i5-8250U is a lot more efficient, gets four more threads and more cache. As far as performance goes, well, here’s what to expect.

While I don’t believe synthetic benchmarks make much sense for real-life use, they’re the best way to actually fair these CPUs one against the other. We ran a couple of CPU benchmarks, and the results are below.

The i5-8250U results are based on two review units (S1, S2) we’ve spent time with. Keep in mind they’re both pre-production samples and these numbers might actually improve with better optimized drivers down the line. Both worked fine though and I’m comfortable to say that’s mostly what we should expect from this CPU.

The other results are based on our reviews and the averages for those CPUs from notebookcheck.net, as they have a larger pool of reviews in their database.

Overall, the i5-8250U improves on all the dual-cores on multi-core performance and it beats the i7-7500U in terms of single-core performance in most tests. It’s neck in neck with the i5-7300HQ CPU in multi-core benchmarks though, despite having four extra threads, and that’s because the i5-8250U cannot maintain 3.4 GHz Turbo Speeds in continuous full loads (Cinebench, x264 Bench). I noticed the same behavior on both our samples, as you can see in the pictures below. 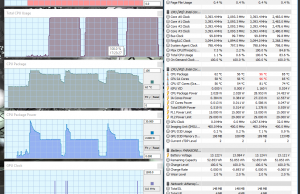 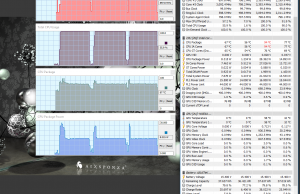 The CPU maintains high Turbo speeds for a short while, which is corroborated with a package TDP of 25 W or higher, but after a few seconds it drops to the standard 15 W TDP and the frequencies drop to 2.2 – 2.3 GHz.

That means that if you need the best option for multi-core performance, the 45 W Core i7 HQs are still the ones to get right now, but the i5-8250U is there next to the i5-7300HQ in most cases, while requiring a third of the power.

We also ran a couple of GPU benchmarks for the Intel HD 620 chips on the i5-8250U configurations and we’re comparing the results to the average HD 620 results from notebookcheck.net.

Nothing unexpected here, the results on the i5-8250U are a little higher than the norm, as the chips can reach slightly higher Turbo Speeds.

There’s also the topic of gaming on an the i5-8250U configuration to discuss, but I can’t draw any firm conclusions based on our two samples. What I can tell you is that the CPU wasn’t be able to maintain 3.4 GHz speeds in recent games on either of the units, with a significant drop on the configuration that relied solely on the i5-8250U and the Intel HD 620 integrated chip (S1 in the pics below), and a smaller loss on a configuration that came with dedicated Nvidia graphics on the side (S2 in the pics). That makes sense, as the GPU integrated withing the processor is inactive in this latter case and as a result the actual cores can run at higher frequencies, not having to share energy with the GPU, within the TDP restrictions. 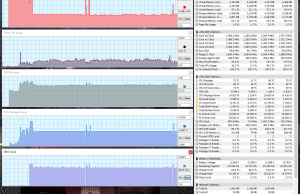 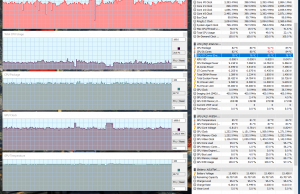 I’d reckon you’ll also be interested on the matters of temperatures, noise and battery life for the KabyLake-R configurations, and while I don’t want to generalize and I encourage you to read the specific reviews for the devices you’re interested in, I can say that these are on par with what we’ve seen on dual-core Kaby Lake builds in the last year.

With all these in mind, if I were in the market for a high-performance ultraportable right now, I see no reason why I wouldn’t pick one of the KabyLake-R models. I would note that I can’t yet conclude on the gaming experience, due to the drop in core speeds we noticed on one of our samples, but if I were into gaming I wouldn’t rely on the Intel HD graphics anyway, but rather go with a thin-and-light with dedicated Nvidia graphics.

For everyday multitasking and demanding loads that put stress on the CPU though, the KabyLake-R Core i5-8250U is an obvious pick over the dual-core i5-7200U and i7-7500U, but also a better balanced and much more efficient alternative to the quad-core i5 HQ processors. The i5-8250U is also just a tad more expensive than the i5-7200U and about $100 cheaper than the i7-7500U, so configurations built around it should have a pretty fair price as well.

Of course, the i5-8250U is just the entry level chip in the KabyLake-R series, with higher clocked i5s and i7s also available for those interested in even more power in this small and efficient package. I’ve yet to spend any time with these for now, so we’ll talk about them in future posts.

Bottom point, the quad-core Core U CPUs are one of the most significant upgrades we’ve seen on thin-and-light ultraportable laptops in the last years, and they’ll make their way into a bunch of devices in the second half of 2017 and later on. Here’s a full list, and stay around for reviews and updates. That aside, the comments section is wide open, so get in touch if you have anything to add, any questions or any feedback.

Disclaimer: Our content is reader-supported. If you buy through some of the links on our site, we may earn a commission. Learn more.
Andrei Girbea, Editor-in-Chief of Ultrabookreview.com. I've been covering mobile computers since the 2000s and you'll mostly find reviews and thorough guides written by me here on the site.
← Previous Story Intel Core i7-7700HQ benchmarks (vs Core i7-6700HQ, i7-5700HQ and i7-4710HQ)
Next Story → Intel Core i5-8300H benchmarks (Coffee Lake, 8th gen) vs i7-7700HQ, i5-7300HQ and i7-8550U