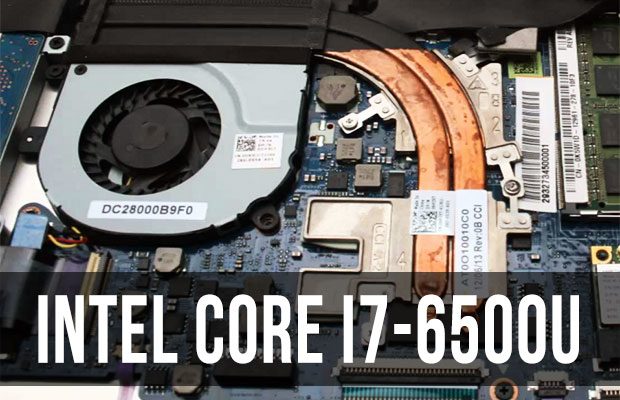 If you’re looking for a latest generation ultraportable in the next 6 to 12 months, chances are you’ll have to pick between either a mid-level configuration powered by an Intel Core i5-6200U processor, or a slightly faster version powered by the Intel Core i7-6500U CPU.

This post is about the latter option, the 6th generation Skylake Intel Core i7-6500U processor, as I’ve tested a few ultrabooks motorized by this CPU in the last days and I’m going to share my findings with you. I’ll tell you a few things about the architecture and about some of the less-known features of the Skylake platform, then I’ll show you how the Core i7-6500U performs in benchmarks and games, and how it fares against the previous Core i7s of its type, the Core i7-5500U (Broadwell) and the Core i7-4500U (Haswell).

The post should come in handy if you’re undecided whether the Core i7-6500U is the right processor for what you need, but if you have any specific questions or need any help, get in touch in the comments section at the end of the article and I’ll try to help.

Ok, let’s have a quick look at the specs sheet. The Core i7-6500U processor is a member of the Intel Skylake U platform (more about Skylake and the different subseries in this post). It’s a dual-core processor with HyperThreading and TurboBoost . The Cores are clocked at 2.5 GHz and can go up to either 3.1 GHz (Max Single Core Turbo) or 3.0 GHz (Max Dual Core Turbo) with TurboBoost.

The CPU has a max-TDP of 15W (for the whole package), 4 MB of cache and can be paired with either DDR3 and LPDDR3 (up to 1600 MHz) or DDR4 (up to 2133 MHz) memory. It does not support vPro. The TDP can be lowered to 7.5W (cTDP) in certain configurations. This CPU is also fan cooled, thus it will be a part of the more powerful ultraportables launched in the months to come, but also of compact mini-PCs, mid-level all-in-ones and some of the full-size laptops designed primarily with efficiency in mind.

On a first, look, when compared to the Core i7-5500U and the Core i7-4500U chips, the newer model gets a slight bump in frequencies and support for DDR4, but there’s actually more about it than meets the eye. 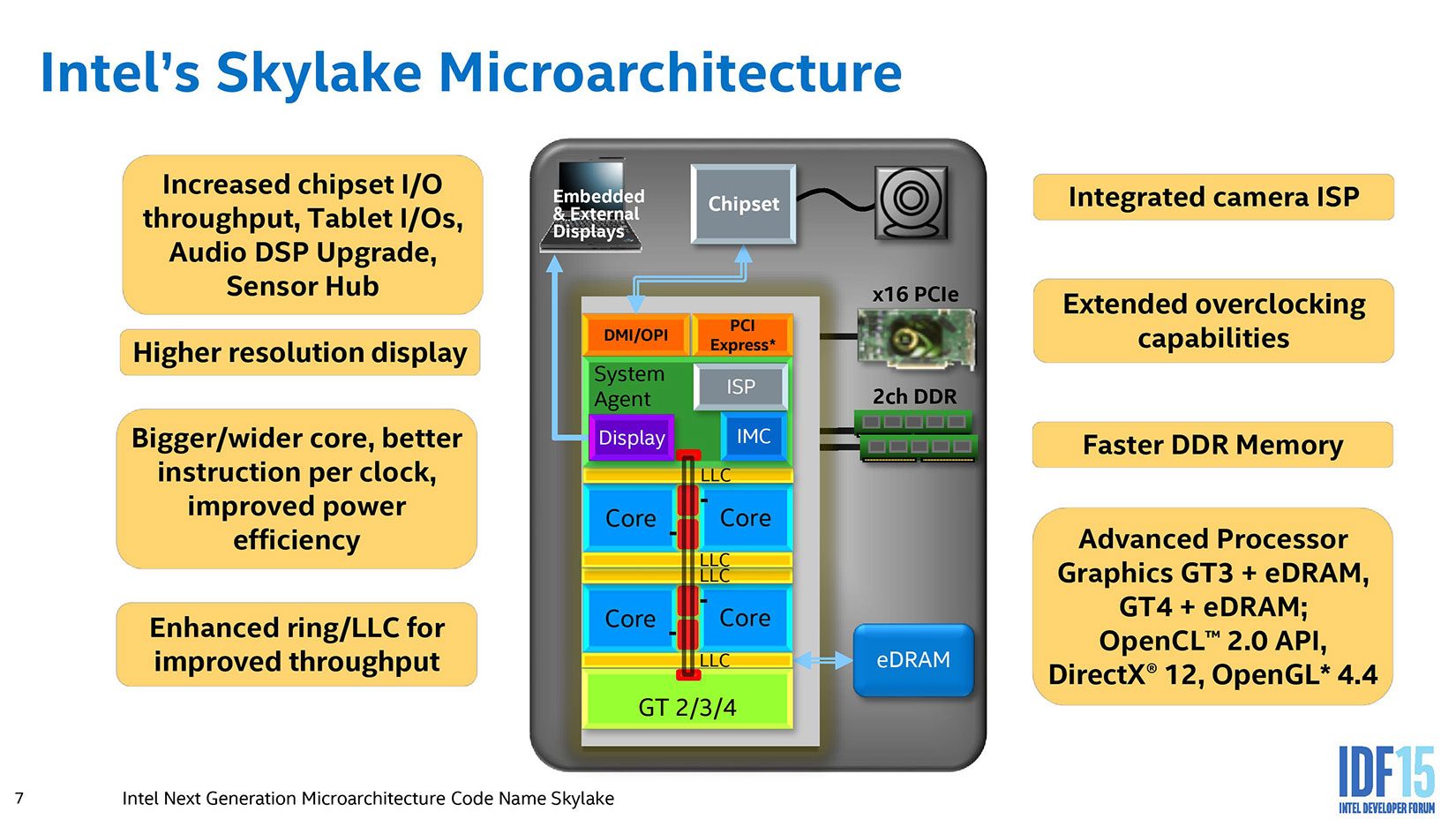 We’re calling the Core i7-6500U a processor, but in reality it is a “package” that includes the actual CPU, the GPU and the memory controller on the same die, among others, as you can see from the picture above.

We talked about the CPU, now let’s turn our attention on the GPU, represented by the Intel HD 520 graphics chip, which is a GT2 version of the Skylake graphics architecture (you’ll find more details about it in this post). It includes 24 Execution units (EUs) clocked at 300-1050 MHz.

This will probably sound like gibberish to many of you, but you’ll see in the following section that the Intel HD 520 chip is actually a significant improvement over the Intel HD 5500 and HD 4400 chips used in the previous generations Core i7s. 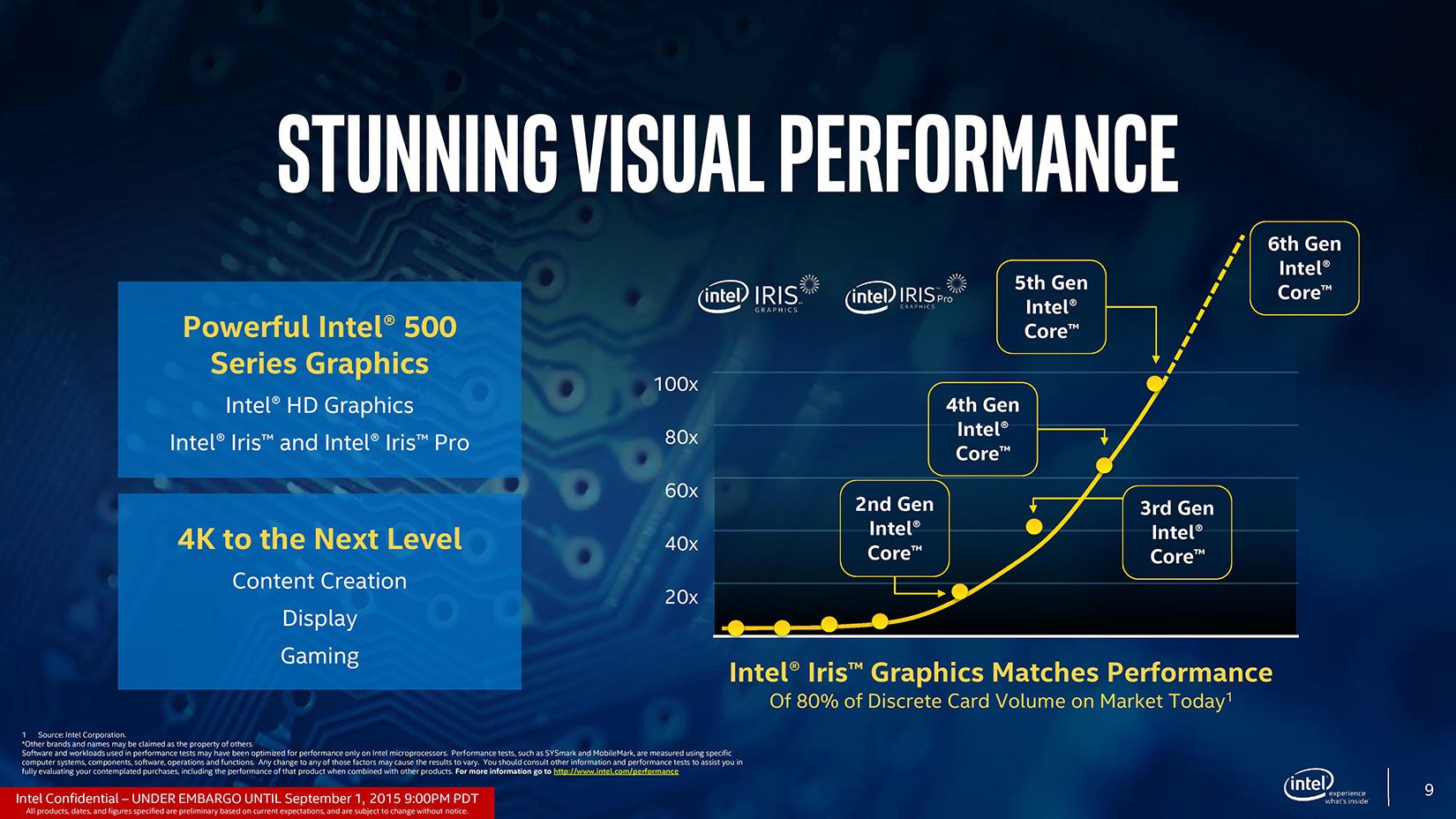 Performance wise, the Core i7-6500U feels snappy in daily use, especially when paired with an SSD. This helps immensely, as well as having at 8 GB of RAM. I’d expect most OEMs to opt for DDR3 memory on the Core i7-6500U ultraportables, while in terms of storage we’ll see many M.2 SATA and PCIe configurations. Lower end laptops will be paired with HDDs or hybrid storage options, while at the other end we should see this CPU paired with PCIe 3rd gen options on a handful of premium models.

The Core i7-6500U is more than capable of handling everyday activities. In fact, there’s no need to get the i7 if you only need a laptop for casual use, the Core i5-6200U and even the Core i3-6010U CPUs will do just fine. The i7 should be the choice for those of you in need of extra performance, those than plan to run a virtual machine, or maybe programs like Eclipse, Photoshop, Premiere and some other demanding software on their computers.

The i7 won’t help much when it comes to multimedia use or games either, where once again the i5 is going to be the ideal pick, especially for the price-conscious buyers. All the Skylake platforms now feature a dedicated video hardware decoder, which translates in superior performance when dealing with video content, including 4K H.264 and the newer H.265(HEVC) standard.

I’m telling you these because the Core i7 is more expensive than the Core i5 option (by at least $100, probably more) in most configurations and it will also run somewhat hotter and require more energy, thus will drain your battery faster. On the other hand, some OEMs will only offer certain features bundled with Core i7 processors, like 16 GB of RAM, the fastest storage options or the best screens. So in some cases you might just have to get the i7, although you wouldn’t actually need it, just to get the other goodies.

And some graphics related benchmarks.

The i7-6500U results are based on a configuration with 8 GB of DDR3 memory and a M.2 SATA SSD. The other two are an average of an average :) . We made an average between the results obtained in our past reviews and Notebookcheck’s average for the two processors (available here and here), as they have a larger pool of test samples.

We also added the Nvidia 920M graphics chip to the mix (source), to show that the Intel HD 520 GPU is within 10-20% of its scores. In other words, if you only plan to play some older games sporadically on your computer, you might not even need dedicated graphics these days, thus you could opt for a smaller, thinner, lighter and longer-lasting device.

BTW, here are a few actual gaming results, all the games running at 1920 x 1080 px resolution with low details. You’re not going to play the most demanding titles launched in the last 2-3 years on a Core i7-6500U configuration, but you can play older or simpler ones.

As we draw the line, the Core i7-6500U is the new benchmark for mainstream low-voltage processors and like I said in the beginning, will make its way into most of the popular Skylake ultraportables, including the higher end configurations of the Dell XPS 13, the Lenovo Yoga 900, the HP Spectre x360 or the Asus Zenbook UX305LA.

But keep in mind that this processor is actually an overkill for the average user, which should rather aim for the Core i5-6200U CPU instead. That one is only marginally slower, offers the same graphics solution, is cheaper and somewhat more efficient. We’ll compare the two in another post.

Bottom point, I feel the Core i7-6500U is a consistent upgrade. It’s not significantly faster than the older Core i7-5500U CPU, but performance was already there. Intel chose to work on other factors, like improving the integrated graphics and efficiency, while adding those less-known novelties introduced with the Skylake platform: DX12 and PCIe 3rd gen support, the hardware video decoder or the improved WiDi and WiGig connectivity, but also the Thunderbolt 3 port or the Realsense 3D cameras that will make their way into Skylake powered machines in the months to come.

So if you’re looking for a powerful ultraportable these days, you won’t regret getting a configuration with an Intel Core i7-6500U processor. Just make sure this is exactly what you need, as the Core i5-6200U is a more affordable option, while the 28W Skylake chips are a more adequate solution for those of you in need of even faster performance on their compact machines (but will only make their way into a handful of models, like the Apple MacBook Pro).