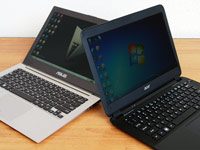 While there are a few ultrabooks available these days, only a hand-full of them can bear the “premium” stamp.

The Asus Zenbook Prime UX31A and the Acer Aspire S5 are two of these and if you’re looking for a top 13.3 inch ultrabook these days and the budget is not your main concern, you’ll come across these two for sure.

Of course, the video comparison below will tell you a bunch of things about these two laptops. If you’re looking for some in depth details though, you should read the entire post below, but also have a look at the thorough reviews we have for them, also here on our site.

We’re going to start by admiring their exteriors. The two laptops come with metallic bodies. The Asus features an unibody aluminum case, while the Acer combines magnesium and aluminum for its body. And while they both look and feel good, I do find the silver finishing on the Asus slightly more appealing, as the Acer does seem a bit dull.

Both are lookers, but the Asus is a bit more extravagant, while the Acer seems rather dull

The Aspire S5 is however slightly slimmer and lighter than the Zenbook, weighing only 2.6 pounds. It also comes with these rounded edges that make it more comfortable to carry around, as the sharp edges on the Asus can be a bit annoying.

On the other hand, the Asus does feel slightly better built, but that might be just my impression.

While both are sleek, the Acer is a bit thinner and lighter

Taking a look at the ports, you’ll notice that the Asus lines them all on the sides, while the Acer only has a couple of them placed there. That’s because most of these are on the back, behind a MagicFlop trap-door. Pressing the button on the upper right part of the interior will make the ports pop-out, accompanied by a mechanical whirr from the Flops motor. That’s definitely cool and unique, but I find having all the ports on the back a bit inconvenient, as they are difficult to reach when in a hurry. Plus, what happens if the mechanism just dies in time?

Overall, both machines offer two USB 3.0 ports, a card-reader and headphone/microphone jacks. The Asus also offers micro-HDMI and mini-VGA output, plus some USB to Ethernet and mini-VGA to VGA dapters, while on the Acer there’s a full-size HDMI and a Thunderbolt port. 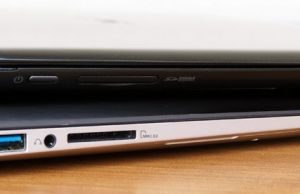 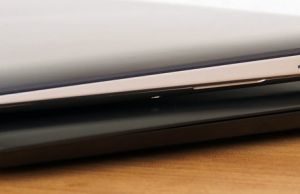 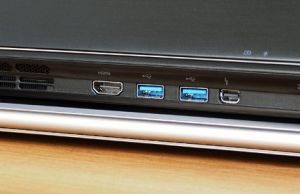 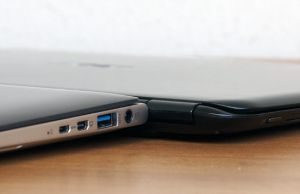 Lifting the lid covers, you’ll find metallic interiors on both these machines, with the same silver aluminum on the Asus and darker finishing on the Acer. Both feel good, but once again I find the looks and the build quality of the Asus slightly better. Plus, having a larger palm-rest is also helpful.

Both these laptops feature 13.3 inch screens, with pretty thick bezels. However, the two screens are miles apart. You’ll quickly notice the non-glare finishing on Asus’s display, while the Acer comes with a glossy one. That’s first.

Turning the computer ON you’ll also see that the Zenbook comes with an IPS screen, with 1920 x 1080 px resolution, while on the Acer there’s just an average TN panel, with 1366 x 768 px resolution. So it’s pretty obvious that the display on the Asus is like night and day when put side by side with the one on the Acer, as it offers far better viewing angles, it’s brighter, has better contrast and colors. Not to mention the extra sharpness brought by the higher resolution. 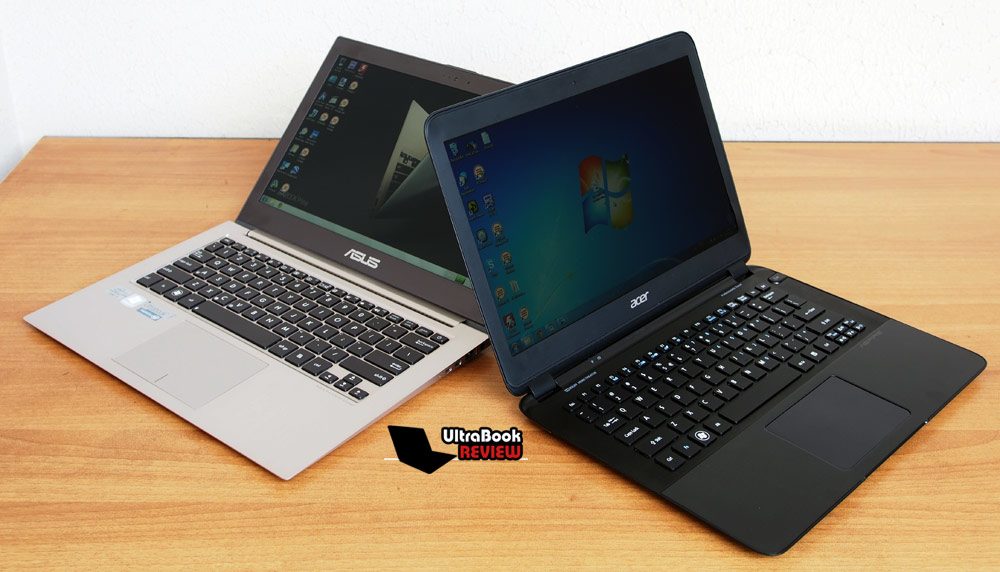 With that aside, let’s have a look at the keyboards and trackpads. Both laptops feature rather good chiclet keyboards, with proper sized and spaced keys. The travel and overall feedback is decent, although none of the two is actually great, but unless you’re an avid typist, you’ll get used to their tiny issues.

There are two more things to add though. First, the Asus offers a backlit keyboard, while the Acer does not. And second, there are some weird layout decisions on the Acer, with an odd looking Enter key, closely bind to the key on top of it, and tiny cursor keys, perhaps the tinniest I’ve seen in a while.

The trackpads are also alright on both these laptops. The one on the Zenbook is slightly larger and should support some extra gestures, but also feels a bit more jumpy from time to time. Both feature integrated click-buttons, but the ones on the Acer are stiffer and more difficult to press than the ones on the Asus. 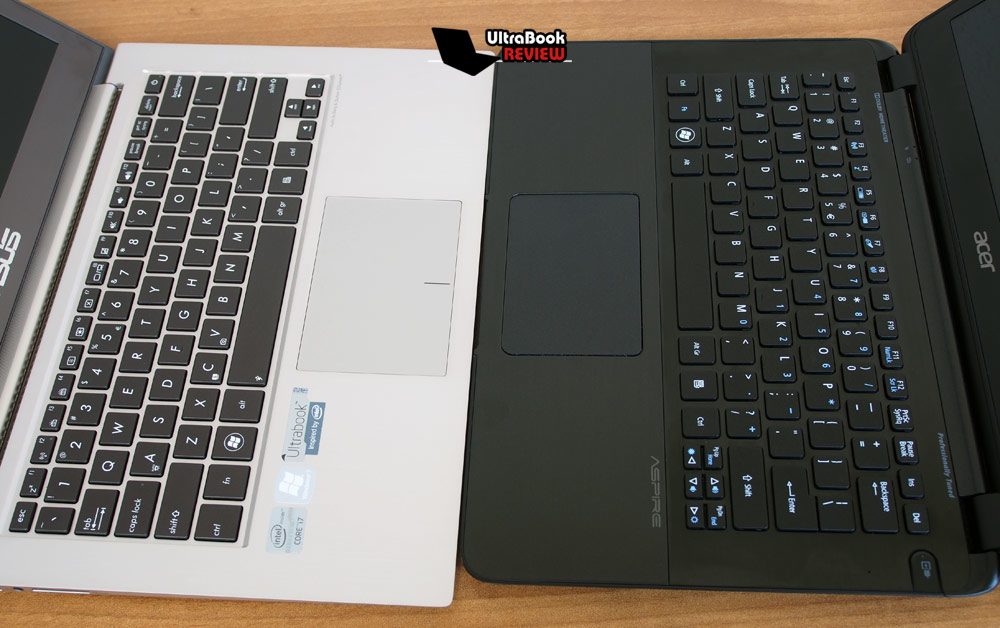 Both have decent trackpads and keyboards, but none are excellent

The two laptops pack the latest Intel Ivy bridge hardware platforms, and you can choose between several configs, with core i5 or faster i7 processors, integrated graphics, 4 GBs of memory or 128 to 256 GB SSDs.

Speaking about those, there are slightly faster on the Acer, but the two laptops do feel overall as snappy while performing daily tasks.

Heat, noise, speakers and others

Both the Acer and the Asus run fairly cool on daily use, although can get slightly warm when pushed, but nothing that bothering. On the other hand, while the Asus isn’t very noisy, the Acer can get annoyingly so, as the fan inside the Aspire S5 tends to be loud and kick on quite often.

Besides those, the two feature similar connectivity options, with Wireless N, WiDi, Bluetooth, but you should notice that some Zenbook have issues with their wireless module. Check out the forums for more details on those.

Both laptops also feature good HD webcams on top of the screen and stereo speakers carved on their underbellies. And while the sound quality is average on both, I did find the speakers on the Acer much louder, as the ones on the Asus could barely cover a noisy room.

As we get closer to the end, we should also speak about the battery life you could get on these two machines. First, there’s a 3 Cell Wh battery on the Acer, while the Asus features a larger 4 Cell WH one, both encased. As a result, the Asus will go for about four to four and a half hours of daily use, while the Acer can barely get to four.

Both these number where tested on the Core i7 versions of the two laptops, which means you’ll get slightly better battery life on the standard Core i5 configs or when using the computers lightly.

As for the prices, the Asus Zenbook Prime UX31A starts at $1099 (but can be found even cheaper), with the premium configs going closer to $1500.

We don’t have the exact prices for the base Acer Aspire S5 version yet, but we do know that the powerful Core i7 + 256 GB SSD config will go for $1400, which is about $100 cheaper then than Zenbook.

All in all, both the Acer Zenbook Prime UX31A and the Acer Aspire S5 are premium 13.3 inch ultrabooks. In fact, they are some of the best you can get in this class, budget aside.

The Acer does have a couple of tricks, like the thin and light body, classic looks, fast SSD and the unique MagicFlop port cover. Both overall the Asus Zenbook is the better pick in my eyes, as it not only looks and feels better, but it also bundles a better keyboard and display, plus lasts slightly longer on a charge. All those while going for basically the same price as the Acer right now. 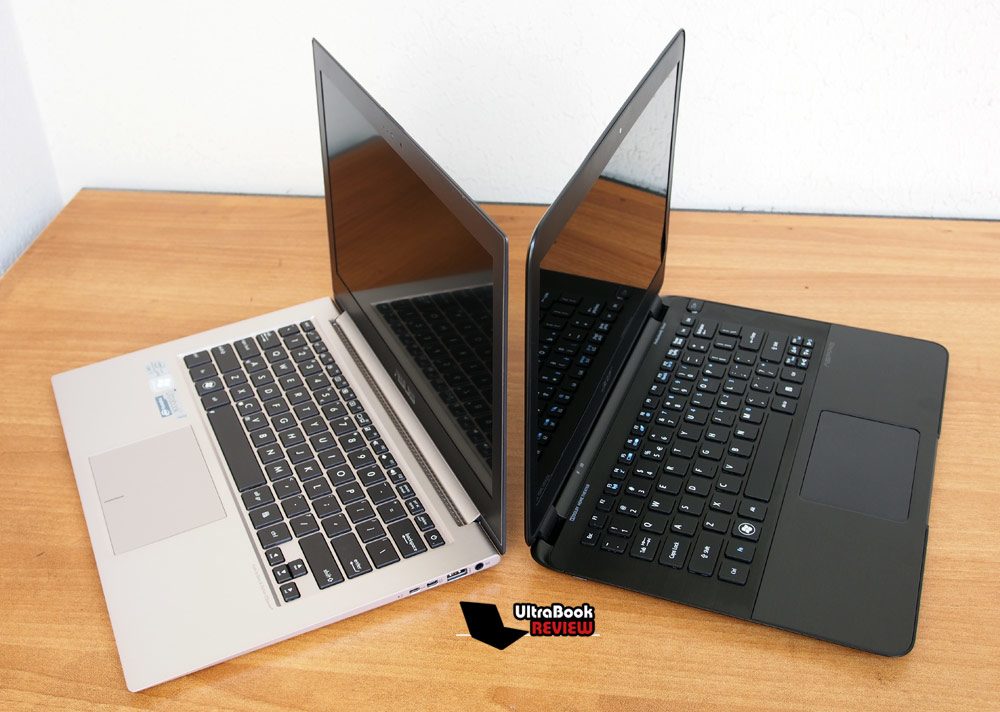 Both the Asus UX31A and the Acer Aspire S5 are premium ultrabooks, but the Zenbook is slightly superior when it comes to those details that mater so much

I do expect to see some price cuts on the Aspire S5 in the near future though and if that happens, then it should become a more viable option, but at the time of this comparison, I do feel you’ll be better off with the Zenbook Prime UX31A.

And with that in mind, it’s time to end this clip. Don’t forget to share it on Facebook, Twitter and all the other social channels. You should also give us a ThumbsUP and subscribe to our channel for the next cool clips to come. Until next time though, Mike out!

Disclaimer: Our content is reader-supported. If you buy through some of the links on our site, we may earn a commission. Learn more.
Andrei Girbea, Editor-in-Chief. I've been covering mobile computers since the 2000s and you'll mostly find reviews and thorough guides written by me here on the site.
← Previous Story Lenovo Ideapad U310 review – a proper budget ultrabook
Next Story → Toshiba Satellite U920t, the convertible tablet/ultrabook