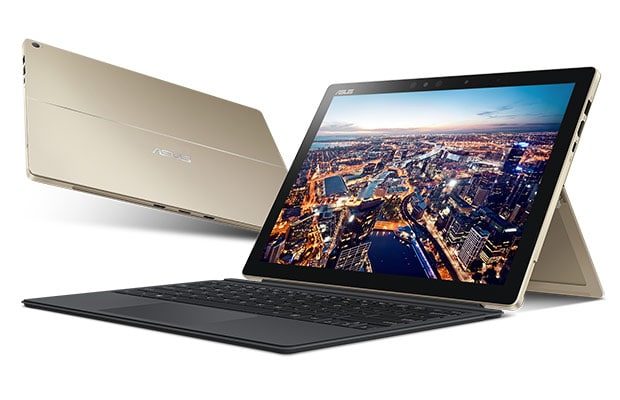 Aside from the Zenbook 3 ultraportable that we covered in a different post, inspired by the Apple Macbook, Asus also recently released a new series of Transformer tablets, which we’re going to talk about in this article.

It’s been a while since we’ve seen new designs from Asus and it looks like their new approach is to study the best device available in a given niche and then launch something very similar, with a few tweaks and improvements here and there. With the Transformer tablets, the “inspiration” comes from Microsoft’s Surface families, and from what I can tell right now, Asus actually did a good job with these new computers.

There aren’t a lot of details on each of them for the time being, but I’ve gathered what we know in the post below, as well as my comments and input on what hides beneath the surface and the beautiful words in the press release, so you’ll know what to expect from these products and whether or not they are worth the wait.

The Microsoft Surface Pro 4 is the best Windows tablet available in stores at the time of this article, and although rather pricey, it’s been well received by customers around the world. It excels as a tablet and works decently as a laptop too, when hooked up to the matching keyboard folio.

Update: Our detailed review of the Transformer 3 Pro T303UA is available over here and sheds light on most of the aspects you might be interested in.

The Asus Transformer 3 Pro builds on the exact same directions. In fact, Asus even compared their product with the Surface Pro 4 in the press-release videos and materials, so they’re not hiding behind the bush here: they created a nearly identical replica of the Microsoft slate, at least in the outside. Personally, I don’t really mind this, I don’t care who copies who as long as in the end buyers get better and more affordable products.

Anyway, the Transformer 3 Pro gets a 12.6-inch display with a wide-gamut IPS panel and 2880 by 1920 px resolution. That’s BTW a 3:2 screen with a fairly slim bezel around the sides, and of course active pen support. The ASUS Pen is slim, metallic and supports up to 1024 levels of pressure, just like the pen compatible with the Surface Pro. On top of the screen Asus placed an webcam array with support for Windows Hello and face recognition, on the back there’s a 13 Mpx main camera, and on the sides you’ll notice some tiny cuts for the speakers, which fire face-wards, but the openings seem minuscule and I wonder if that’s going to have an impact on the sounds quality. We’ll find out in the future review.

The Transformer 3 Pro is also sleek and solid built. The entire case is made out of aluminum, so it looks well and should prove sturdy. The edges seem nicely chamfered, so I’d expect this thing to fit well in hand, especially since it’s thin (8.5 mm). We don’t know anything about its weight though, but should be somewhere around 770-800 grams (1.75 lbs). 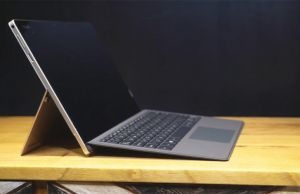 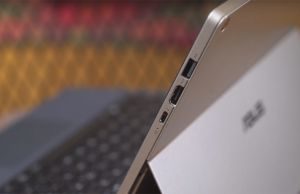 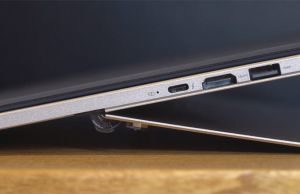 On the slate’s sides you’ll find the IO, with one full-size HDMI port, one USB 3.0 connector, a microSD card-reader, a 3.5 mm audio jack and an USB 3.1 gen 2 port, or in other words a Thunderbolt 3 port, a certain feature the Surface Pro 4 does not offer.

You’ll also notice the venting at the top, cause the Transformer 3 Pro is motorized by Intel Skylake Core i5 and i7 processors, which are fan cooled, and I cross my fingers the fan on this one is going to be as quiet and as efficient as on the Surfaces. The other hardware specs include up to 16 GB of DDR3 2133 MHz of RAM and up to 1 TB of NVMe storage. No word on the battery capacity though, but again, it should be on par with the Surface Pro 4 (around 40 Wh), as Asus claims their unit can go for up to 9 hours on a charge.

The Transformer 3 is not just a slate though, it can also work as a notebook. There’s a step-less kickstand on the back and a matching keyboard-folio, which Asus calls the Transformer Cover Keyboard and hooks up magnetically to the bottom of the tablet. It even comes with a raised and a flat position, just like the Type Cover on the Surface Pro does.  The Cover includes a chiclet keyboard with illuminated full-size keys and 1.4 mm drop, whose layout is pretty much identical to what we’ve seen on 13-inch Zenbooks on the past. There’s also a glass touchpad beneath. 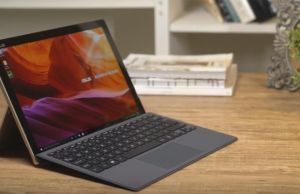 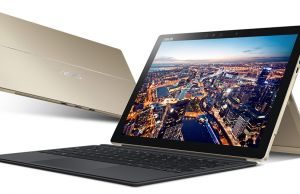 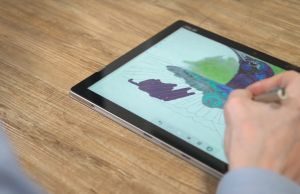 So long story short, Asus actually copied the Surface Pro 4 to the finest details here. A future review still needs to shed light on performance, thermals, acoustics, battery life and keyboard quality though, before we get to draw any conclusions on how the Transformer 3 Pro fairs against the Microsoft slate.

Update: Our detailed review of the Transformer 3 Pro T303UA is available over here and sheds light on most of the aspects you might be interested in.

The first impression is really solid though, especially since the Transformer actually offers a slightly larger screen and a Thunderbolt 3 connector. On top of that, it’s supposed to start at $999, so it might have a price advantage over the Surface as well. But for now we don’t have anymore details on availability, pricing and configurations, so we’ll update this section once we know more.

The Transformer 3 is a sleeker and more affordable tablet. It gets a similar screen to the Transformer 3 Pro, with the wide-gamut panel and pen support, but that’s one of the very few similarities between the two. In reality even the screens aren’t the same in practice, as the one on the T305CA is much brighter, as you can see from our detailed review available over here.

On the outside, the Transformer 3 is lighter, slimmer and more compact than the 3 Pro. It weighs just shy of 700 grams and its 6.9 mm thin. It’s made from a slab of metal, available in Silver or Gold, so it’s going to get the looks and the sturdiness, but it lacks a kickstand on the back and it’s more limited in the terms of IO. It only gets an USB 3.1 Thunderbolt 3 port on the edges, alongside a 3.5 mm audio jack, a fingerprint sensor with Windows Hello compatibility, a keyboard connector on the bottom lip and a set of four speakers on the lateral sides. 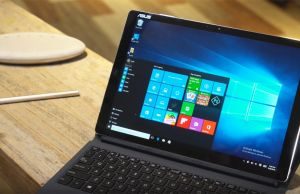 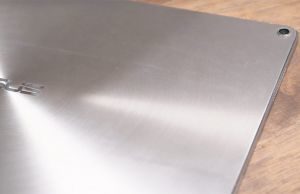 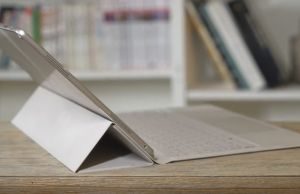 There are also no cooling vents around the edges, and that’s because the Transformer 3 is built on Intel Core fanless hardware. However, from what we know right now, this tablet is going to come with 7th gen Kaby Lake hardware, so it won’t be launched until towards the end of 2016. It will support up to 8 GB of RAM and 512 GB of SSD storage space, but we don’t have any specifics on the battery size for the time being.

Asus plans to pair the Transformer 3 with a Transformer Sleeve Keyboard, with full-size backlit keys and 1.4 mm of travel. The sleeve acts as a stand with two working positions, as you can see in the clip below, necessary since the tablet does not include a kickstand. It also acts as a complete sleeve when closed, covering both the display and the back of the tablet.

The Asus Transformer 3 is sleek, fast and fanless, but it’s only going to be available in stores towards the end of 2016

One final detail we know right now is the starting price for this device: $749, but we’ll find out more in the months to come though and hopefully we’ll even have a review for this product, so stay tuned for updates.

Update: We’ve spent time with the Transformer 3 T305CA and gathered all our impressions in this post. Check it out for more details.

Update: We’ve spent more time with the Mini T102HA in the meantime, and our full review is available over here.

In other words, it’s a more compact slate with a 10.1-inch display and Intel Cherry Trail CPUs, thus a fanless slate that will last up to 11 hours on a single charge. We also know that the screen is compatible with the Asus Pen, so can be used for inking and drawing.

Build wise, the Transformer Mini is pretty sleek, but lacks the metallic finishing of the more premium options. Its back case is made from plastic from what I can tell and Asus will offer it in multiple different colors. The slate weighs around 800 grams, is 8 mm thick and has a kickstand on the back capable of opening to 170-degrees.

The Transformer Mini is a redesigned 10-inch slate with an improved screen, new hardware and a different form-factor

The sides are pretty straight and house a few connectors: a microSD card-reader, an USB 3.0 slot, a micro-HDMI connector and micro-USB slot, so this device is not going to offer any sort of USB 3.1 connectivity from what I can tell right now. There’s also a fingerprint reader on the back and a front-facing camera on top of the display.

Asus bundles the Transformer Mini with a keyboard-folio, not a keyboard-dock like on the older Transformer Books. That’s why a kickstand is required for desk use. The folio latches magnetically to the bottom of the slate and chiclet non-backlit keys and a decently sized trackpad. Lapability is going to suffer due to the form factor, but the slate+folio combo is lighter and more portable than the slate+dock were on the previous iterations.

The Transformer Mini is expected in stores towards Fall and should sell for around $400 with the Keyboard Folio included. Follow this link for our in depth impressions gathered in the review, and this one if you’re interested in the latest T102HA configurations and their updated prices.

On a first look, this new line of Transformer slates seems solid and looks like It could be worth the wait. The market for such products isn’t huge, but if Asus manage to deliver on what they’re promising right now, they’ll be able to grab a bite at each level with their range of three different devices.

I do hope they’ll do a good job with quality control though, and I also hope they’ll actually be able to have these Transformer 3 tablets in stores sooner than later. We’ve seen Asus products announced at Computex in the past that took many months, even years, before they became actual products. Right now, there’s a lot to like about these devices, but 6-months from now they might not be as attractive.

Anyway, this pretty much wraps up this post for the time being, but stay tuned for updates in the future. If you have any questions or things to add, please get in touch in the comments, and if you’re after a 2-in-1 ultraportable similar to the ones presented here, but don’t want to wait, you should check out our detailed list of 2-in-1s available over here.