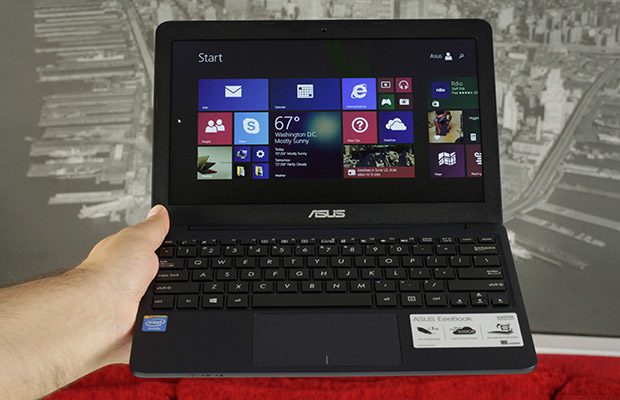 It’s been quiet here lately but I haven’t been slackening, as I tested a few new laptops for our other website, TLBHD.com.

Among them, the three mentioned in this post’s title, the Asus N551JK multimedia laptop, an update of the popular N550 series, the compact and affordable Asus EeeBook X205TA, an 11.6 inch sleek and light mini laptop that sells for only $199, and the mainstream 15.6 inch Asus X555 series. Why just Asus laptops, you might ask? Well, it’s easy, that’s what I can mostly grab my hands on in this part of the world (spoiler alert, stay close, I’m currently working on reviewing a new 2-in-1 laptop, and it’s not an Asus :P )

Neither of these laptops mentioned above are ultrabooks per se, in fact the N551 and the X555s are not even ultraportables, but all of them are interesting entries in their classes and all of them are new (some even unreleased yet at the time of this post, but they will hit the stores in the next few weeks). So I am going to tell you a few things about each below.

On a first look the N551 might look a lot like last year’s N550, with mostly a similar silver metallic body, interior design, keyboard or display. It also packs the compact external subwoofer that Asus have included with N series laptops for a while now.

However, once you look a bit more carefully, you’ll notice some of the changes that make the N551 revision imh an overall superior device to its predecessor.

But let’s start with what you might not like. The N551 is not entirely covered in aluminum anymore and is thicker and somewhat heavier than the N550. The bottom and part of the edges are made from rough plastic, but the lid-cover and the interior are still metallic, so I don’t think that particular aspect should bother you too much. Especially since this approach allows for a an easily removable battery and quick access to the RAM and storage bay, in case you want those upgraded.

My major gripe with the tested N551JK was the poor Wi-Fi performance once you got a bit further away from the router. Close by, nothing to complain about, but at 30 feet with 3 walls in between the speed dropped considerably. Hopefully the final release unit won’t have the same issues, and if they do, it is possible to replace the Wi-Fi chip if really needed, although it might get a bit complicated. 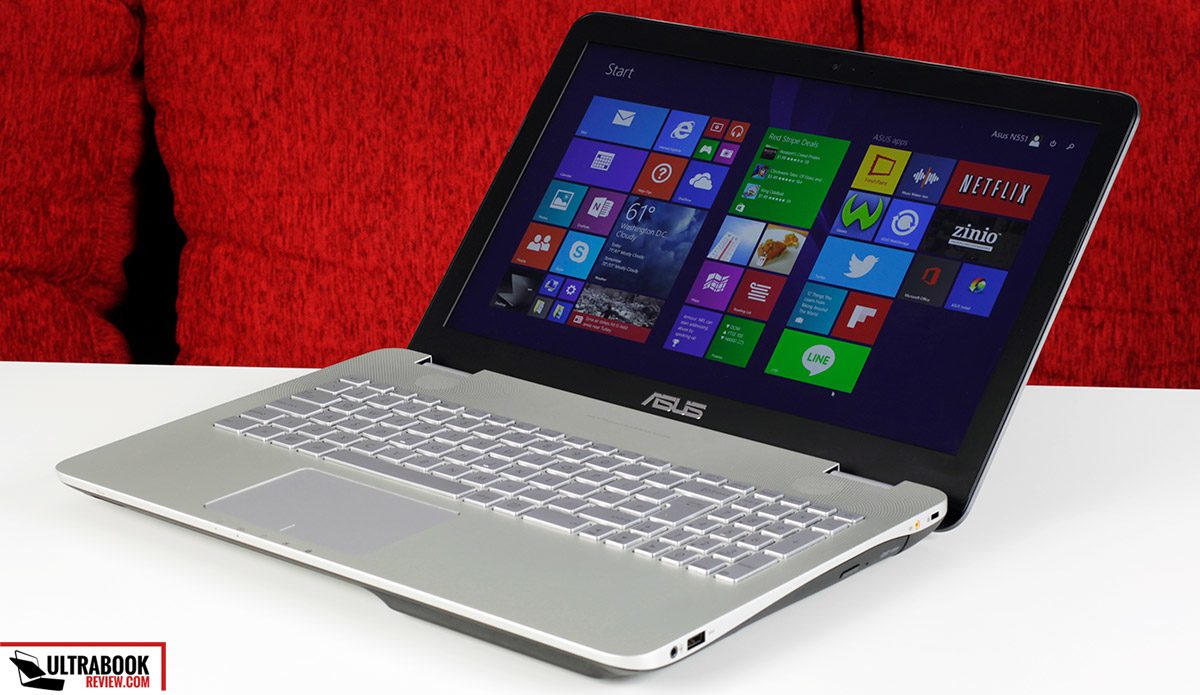 The Asus N551JK bundles fast hardware, a nice IPS screen, a metallic body and a powerful speakers system in a proper priced package

On top of these, the new laptop offers a redesigned cooling solution, with the exhaust placed on the left edge, and no longer behind the screen’s hinge. And that seems to work really well, as the N551JK is a solid performer and doesn’t get hot under load either. I’ve tried a couple of modern games and had no problem running them smoothly at the screen’s native resolution (FHD), with medium, and in some cases even with Very High, details.

Speaking of the screen, Asus put a nice IPS panel on this N551JK. It’s matte and paints popping colors, it’s bright enough for indoors use and the contrast and viewing angles aren’t bad either. On the other hand, some of you might complain about ghosting in certain games (IPS panels are usually slower), but I for one would rather live with that than with any of the available TN displays. Plus, let’s not forget this is not primarily meant for gaming, it’s a multimedia laptop, powerful enough for intense everyday use, for photo and video editing, for watching movies, for programming, etc.

That’s the short story. The long version is here, in my detailed review of the Asus N551JK and in the video below.

You’ll find laptops selling for between $500 and $900 in this line, basic everyday 15.6 inch computers for the average consumer. They are built on Intel Haswell hardware, but corners were cut when it comes to the materials, screen quality or battery size. But if you do want mid-level notebooks with a modern platform, these might be the ones.

Asus also plans a K555 model for the next few months, with a metallic case and slightly beefier configurations. While the X555 versions will be available in mostly two variants, as the X555LA (with Intel 4400 HD graphics) and the X555LD (with Nvidia GT 820M graphics), paired with Core i3, i5, and i7 processors, up to 8 GB of RAM and 1 TB HDDs, the K555LDs will bundle Nvidia 840M graphics, the same choice in processors, memory and storage, but also a 1920 x 1080 px display (with a TN panel, but hopefully overall better than the options on the X555s).

You can find more about both these series from my extended review. 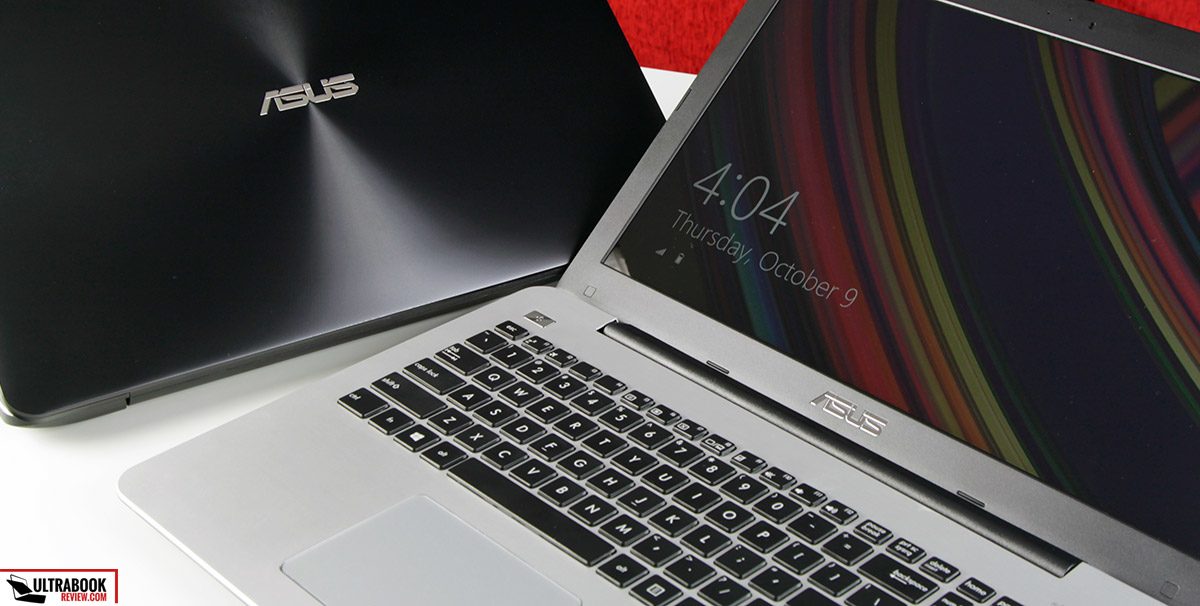 This is an 11 inch laptop that weighs less than a kilo, runs on a fanless (thus completely quiet) platform and will last for 6-8 hours of real life use. Not bad for something that sells for $199.

The EeeBook X205TA isn’t the only notebook available for this kind of money out there. The Acer Chromebook C720 is almost a year old and was one of the best selling laptops in the US, UK, Germany and other markets where users can take full advantage of Google’s services (and where this thing is officially sold). But the X205TA runs Windows, and that makes it a potentially far more versatile device, since it can run most of the software you’re already familiar with from your PCs.

On the other hand, this thing is built on Intel Baytrail-T hardware, a low powered platform only suitable for basic everyday activities. It will handle light/medium browsing fairly well, it can run music and 1080p video content (self stored or streamed) and Microsoft’s Office suite won’t pose problems as long as you don’t deal with very large files. But this is not built for complex multitaksing, for Photoshop and other such demanding programs and activities. 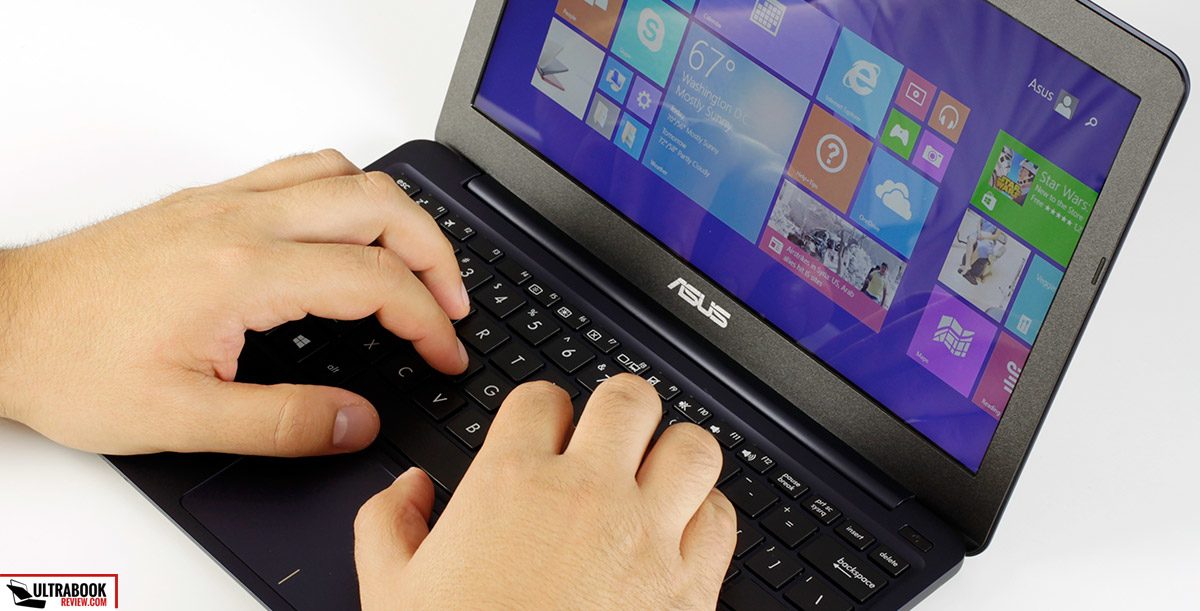 On top of that, there’s a mediocre screen on this one, with a 1366 x 768 px  TN panel, which translates in poor viewing angles, contrast and colors. It’s also glossy, thus you’ll end up with reflections and glare in bright light environments. But it’s not like it would be fair to expect a significantly better display on such a cheap computer.

My biggest gripe with the X205TA is the limited amount of storage space: 32 GBs, out of which about 14 are available for your own content with a fresh Windows install, and we all know how quickly the Windows folder grows in time, as you install updates. Asus uses an eMMC for the storage, soldered on the motherboard, which cannot be upgraded. And that leaves you with one solution: use a microSD card to expand your storage (the X205 can take up to 64 GB cards). Or, you can wait for the 64 GB versions of this laptop, which should be available in the near future and will probably sell for around $220-$230.

But even with the limited storage space, the X205TA sure offers a lot for the money and could make for a great Windows running secondary computer, or a light and inexpensive laptop for your kids. Asus plan to offer it in a couple of different colors, and that should make it even more appealing to youngsters. Check out my complete review on TLBHD.com if you’re interested in this device and follow this link for up-to-date prices and potential discounts.

Disclaimer: Our content is reader-supported. If you buy through some of the links on our site, we may earn a commission. Learn more.
Andrei Girbea, Editor-in-Chief of Ultrabookreview.com. I've been covering mobile computers since the 2000s and you'll mostly find reviews and thorough guides written by me here on the site.
← Previous Story MSI GS60 Ghost Pro 3K review – Nvidia GTX 970M & 870M versions
Next Story → Asus G551JM / G551 review – a fair priced 15.6 inch gaming laptop