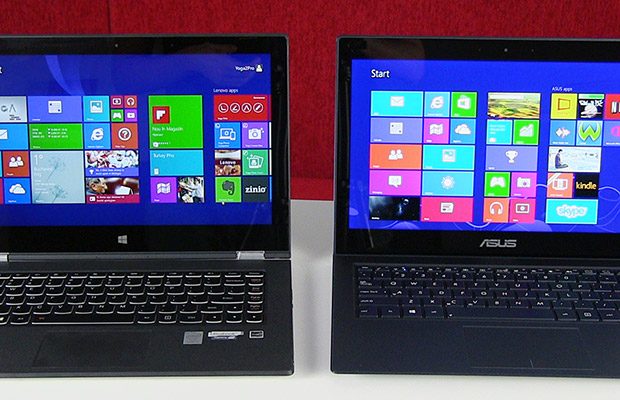 In this post we’re going to pitch the Asus Zenbook UX301LA against the Lenovo Yoga 2 Pro. These two are some of the best ultrabooks money can buy right now, so I’m pretty sure many of you have considered at least one of them.

They don’t just pack Intel Haswell hardware in several different configurations, sleek bodies and high resolution displays,  each of them actually has a few aces down its sleeves.

Asus squeezed a 28W platform inside their top-version, which makes it about 15 to 25% faster than the top-tier Yoga while performing various tasks. They also put a stunning screen on this laptop and dressed it in a stylish, yet highly prone to fingerprints, glass coating.

The Lenovo Yoga 2 Pro has the more affordable prices on its side and the versatile form factor, as the screen flips 360 degrees on the back and allows you to use the device both as a regular laptop, but also as a stand or even as a large tablet.

In the end though, you just want to know which is the better pick between these two. And while that’s not an easy question to answer, the post below will definitely help you lean towards one or the other. And if you’ll need more help, you should definitely check my detailed reviews for both the Zenbook UX301 LA and the Yoga 2 Pro.

On a first look, these two are miles apart.

On one side we have the Asus Zenbook, with a Gorilla Glass covered body, available in white or blue, while on the other there’s the Lenovo Yoga 2 Pro, with a simpler metallic case, available in Orange or Gray. Or in other words, there’s a stylish option next to a more practical one. And that’s because the glass on the UX301LA, no matter how sleek it looks, catches smudges, dust and fingerprints in merely seconds and is a complete pain to keep clean. The rubbery finishing on top of the Lenovo is more permissive.

That aside, the Yoga 2 Pro is a convertible ultrabook with a touchscreen, which flips all the way back to 360 degrees, allowing you to use the device as a standard laptop, as a tablet, or several other things in between. The Zenbook packs a touchscreen as well, also covered in Gorilla Glass, just like the one on the Lenovo, but with a fixed position, similar to what we’re used to from older laptops. And that’s why the Yoga is a far more versatile device that the UX301LA and is more comfortable to use in more situations (both are fine for desk use, but the Lenovo is better suited for  more space-constrained situations).

The Yoga 2 Pro might not astonish with its looks, but it’s highly versatile

And there are a few other aspects that make the Yoga a more practical device, in my opinion. For instance, the lid cover is stronger and does not bend as much when pressed like the one on the Zenbook. Then, the palm-rest is covered in a soft rubbery plastic on the Lenovo, while Asus uses a matte glass surface for this area. Again, Asus went the fancy way, while Lenovo stick with the simpler approach. 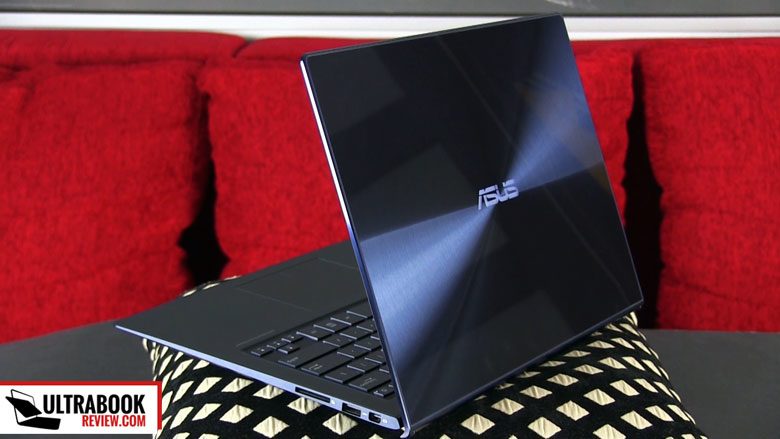 I also have to mention the sharp edges on the Zenbook, especially annoying on the rather tall front lip, which simply cuts into your wrist when having the device on a desk, something I don’t have to worry about on the Lenovo. And last, but not least, we have the cooling systems. The UX301LA draws air from the belly and blows it away through the hinge, towards the user and the screen. The Yoga 2 Pro draws air from the back and blows it away also on the back, away from the user. And that’s imh a far smarter solution.

Of course, there are areas where the Zenbook is a notch over the Yoga. For instance, both pack micro-HDMI slots, but there are two USB 3.0 ports on the UX301LA and a mini-DisplayPort connector, while the Lenovo only offers one USB 3.0 and one USB 2.0 slot. On top of that, Asus also bundles the Zenbook with a few useful adapters that you’ll have to pay for on the Yoga.

There’s also a larger trackpad on the Zenbook. In fact, both laptops feature smooth glass clickpads and both work fine most of the time and support gestures, but the one on the Yoga is rather cramped for a 13 inch laptop.

And if we’re here, I should also mention the keyboards. The two manufacturers went for somewhat different approaches and layouts, as you can see from the pictures and the video. Lenovo’s one is a bit weirder imh, due to the inverted F keys and the extra row of keys toward the right, past Enter and BackSpace. On top of that, the keys on the Yoga don’t travel very deep into the frame to ensure the right amount of feedback, that’s why it’s going to take a while to get used to this keyboard.

So all in all, while both keyboards are alright, with nicely spaced and sized illuminated keys, if I were to choose between these two laptops based on the keyboards alone, my money would go towards the Asus here. 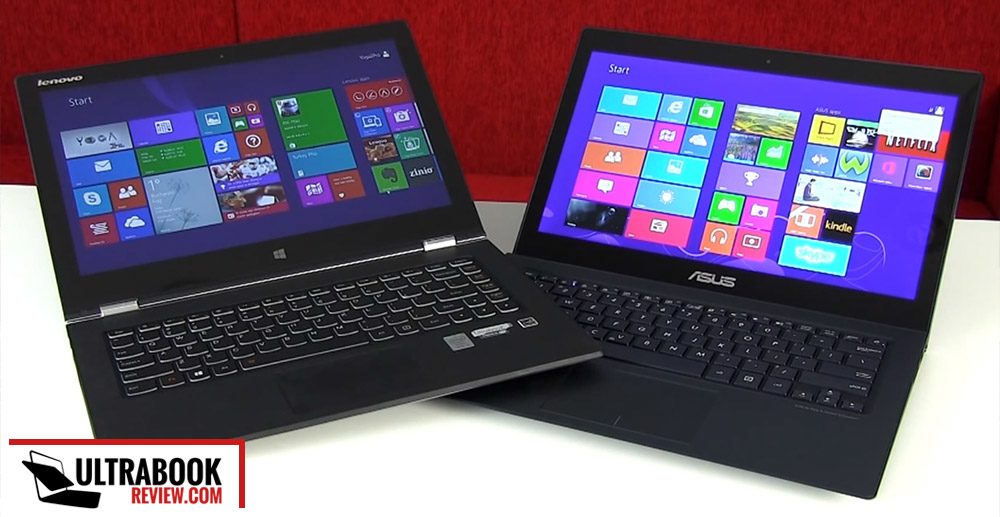 Different layout keyboards on these two

But there are many other important aspects to consider. Among them, there’s the screen. As I mentioned before, both these ultrabooks pack 13.3 inch displays, but all the similarities between them end here.

Asus picked a 2560 x 1440 px IGZO panel for their device, sharp, bright and capable of displaying accurate colors. Lenovo went for a higher resolution 3200 x 1800 px IPS panel with a pentile matrix. As a result, the Yoga 2 Pro is not as bright, but displays deeper blacks than the Zenbook and has some color painting problems, especially with Yellows on Energy saving power modes.

Lenovo released a BIOS update for this specific issue, but even so, if you’re planning on using the laptop on the most efficient Power Mode, the Yellows will get a dirty-green look. Some of you might not notice that, but the issue is there and it’s annoying.

Aside from all of these, there’s another thing to consider: scaling. You’re not going to be able to use these screens at native resolution without scaling the fonts up. However, while most Windows 8.1 interfaces scale up properly, that can’t be said about many of the third party pieces of software, so you’ll have to deal with minuscule buttons and fonts on these two, from time to time, mostly on the classic desktop mode.

In time, these issues should be addressed. But for now, scaling quirks are something you need to be aware off when shopping for Windows laptops with high density displays.

While both screens are impressive on a first look, they are not without quirks

Performances and everyday use experience

All these being said, we should turn our attention on the hardware and specs.

Both these laptops bundle Intel Haswell hardware platforms, with SSD storage and up to 8 GB of RAM. Upgrade possibilities are extremely limited (you can replace the SSDs) in both cases, so make sure you get what you need from starters.

However, Asus offers a top-tier configuration for their Zenbook UX301LA, with a more powerful Intel 28W processor and more capable Intel HD 5100 graphics, on top of all the other configs available on both series (Core i5-4200U and Core i7-4500U CPUs). That makes the UX301LA more interesting if speed and performances are what you need from your ultrabook, if you plan to edit photos and videos or maybe even run some games on an under 3 pound laptop. You can do all those things on the most powerful Yoga as well, but it’s not going to be as zippy as the top Zenbooks. I’ve actually compared the i7-4558U’s performances with those of the i7-4500U in this post, so you might want to have a look before continuing with the comparison.

The slower SSD does drag down the Yoga 2 Pro, as Asus offers faster modules and RAID 0 configurations on their units. But for the average user, the storage solution inside Lenovo’s ultrabook will do fine.

Of course, given the more powerful hardware on the top configuration, it comes to no surprise that the Zenbook runs hotter and noisier than the Yoga 2 Pro. The underbelly and the area on top of the keyboard and just below the screen tend to get hot on the UX301LA when pushing the device, while on the Lenovo the areas around the cooling grills get merely warm, and the fan is dead-silent more often than on the Asus.

However, if you decide to buy a standard configuration on the Asus as well (let’s say Core i5-4500Us o both units), the temperatures and noise gap between the two lines is going to get narrower.

Moving on, we can’t end this video without a few words about the expected battery life. In my tests, both laptops will last for around 5-6 hours of daily use, which includes a mix of browsing, text-editing and multimedia content, with the screens at about 50% (slightly higher on the Lenovo, since the panel is dimmer), Wi-fi ON and Power Saving modes.

But if we’re to draw the line on these two, I for one can’t say that one is clearly better than the other. Both are great devices, with their pros and cons. The Asus Zenbook UX301LA for instance has the powerful hardware, the sleek glass covered body, the superior keyboard and screen, plus the slightly longer battery life on its side. The Yoga 2 Pro has the more practical body and design elements, plus the versatile form factor. And there’s another aspect: it’s way cheaper than the UX301LA and it’s already available in more countries than the Zenbook is.

Hard to pick a clear winner between these two

Back to those prices, the base version of the Asus ultrabook, with an Intel Core i5-4200U processor, 4 GB of RAM and a 128 GB SSD, starts at around $1400, while a similarly configured Lenovo Yoga 2 Pro starts at only $1100 right now and the gap gets wider with more powerful configurations. Those are both list prices. And while both these units are available somewhat discounted online, Lenovo actually offers bigger price-cuts for their Yoga 2 Pro right now, bringing the base model under 1 G.

I for one, as much as I appreciate the Zenbook, consider that unless you really need the 28W hardware platform on your machine and the faster SSDs (or in other words, if you need the raw performances), the Yoga 2 Pro is the better deal for the money. And that despite its more numerous shortcomings.

But I’d like to know what do you guys think about these two, so leave your opinions below. And of course, if you need any help or have any questions, post them below as well, I’ll be around to reply.