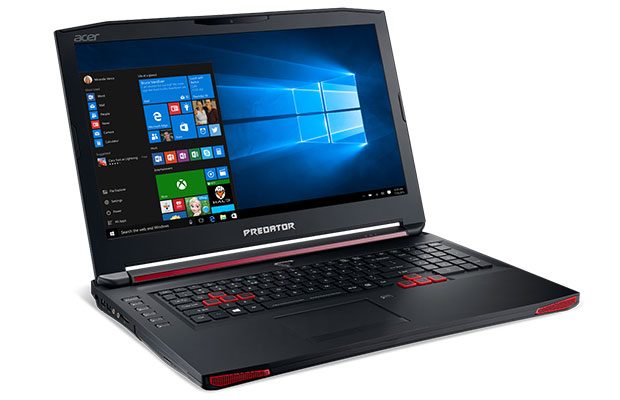 Acer haven’t been an active player in the high-end high-performance laptop segment so far, but that’s going to change with the release of the Predator 15 and 17 gaming notebooks, scheduled to get in stores in November 2015.

These laptops will rival established products like the Asus ROGs, the Lenovo Y50/Y70 or the MSI GE/GT lines, among others, promising excellent performance and features for a fair price.

Building a competitive gaming machine is not an easy task though, as there are many aspects that need to be balanced properly, so we’ll have to wait for the final products before we get to say whether the Predators are great buys or not. So far though, I can tell that based on the specs sheets and Acer’s announcements, these machines sure look like potential bestsellers.

The larger model, code-name Acer Predator G9-791, gets a FHD or Ultra HD 17.3-inch panel, and it’s worth noting that the 4K option will offer 100% Adobe RGB color coverage, which would make it an option for professional designers/editors, not just for gamers. 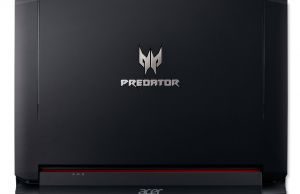 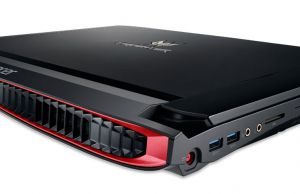 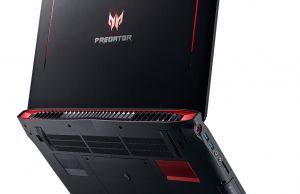 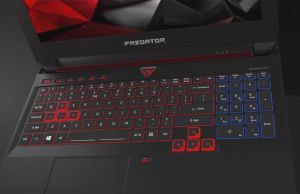 At least some of the available options will support Nvidia’s GSync technology.

Aesthetically, Acer went for a Black and Red color scheme on these two, which reminds me of Asus’s ROG series. The design lines are fairly close as well, although I think Acer got a few aspects wrong. For instance, the branding and intrusive red elements are rather aggressive on the Predators. There’s a massive metallic logo on the hood, partially backlit, as well as two red light bars. Then there are the red cooling exhausts on the entire back and the red grills around the front-speakers. All these might appeal to some users, but will kill the Predators for specific professional environments, where restrained looks are a must.

One other thing that might bother some potential buyers is the rather tall front lip of these two, which might cut into our wrists when typing. I remember that being a slight nuisance with the prototypes I’ve encountered, but I’ll need to use these laptops for longer before drawing any conclusions.

These aside, the interior looks pretty neat, with a wide-spaced palm-rest, a complex keyboard and a full-size trackpad. I do hope that glowing red Power button on top of the keyboard can be turned off though.

Both the Predator 15 and 17 include a two-tone backlit keyboard with NumPad Areas and customizable macro keys, Microsoft Precision certified trackpads with mechanical buttons and a large selection of ports on the sides, with an USB Type-C (Thunderbolt 3) connector and an internal optical drive, among the other more common features. Most of the ports are on the right edge, which will lead to a rather cluttered side if you’re going to connect many peripherals.

Hardware wise, the two series are built on Intel’s Skylake-H platforms, with options for Core i5-6300HQ or Core i7-6700HQ processors, up to 64 GB of DDRAM 4 (4 SODIMMs) and Nvidia 980M graphics with 4 GB of video memory. If you don’t need that king of graphics power or you’re on a lower budget, both can be also configured with the Nvidia 970M 3 GB chip. For storage, you get a PCIe Gen3 slot for a fast SSD, plus a 2.5″ inch SATA drive bay for your massive storage, but both can also take a secondary 2.5″ storage drive, according to the specs (can’t tell for sure if that includes replacing the optical drive with a storage-bay, but that’s probably the case).

Buyers will be interested in how easy these laptops could be upgraded, and from what I can tell there is a quick-service tray on the bellies of both these Predators, which should offer access to the RAM slots and the storage bays.

Ok, so by the looks of it, these laptops won’t come short in terms of performance, but performance is closely tied to the cooling solution on such powerful configurations. A proper solution would ensure the hardware won’t throttle under load. 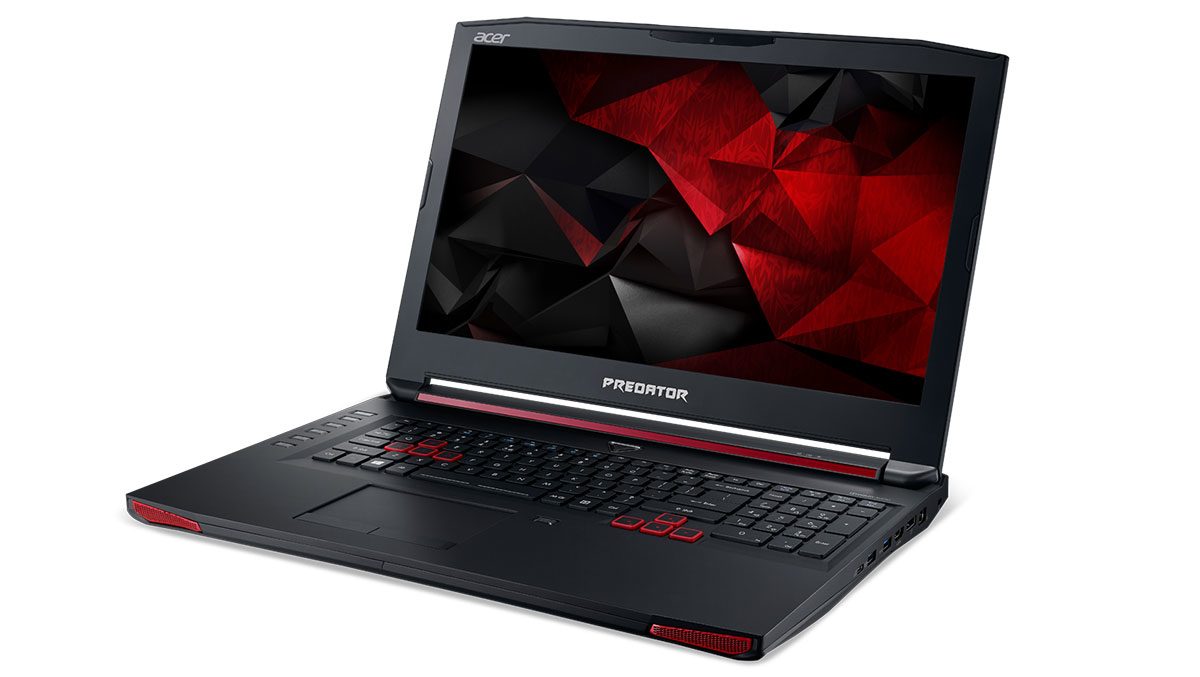 Acer did share some aspects about their approach, but details are still rather scarce for now. We do know that both notebooks get two rear-exhaust fans hidden behind those aggressive red grills, but the number of pipelines, their design and whether the fans run in series or in parallel is still unknown. Acer advertises a technology called Predator DustDefender for these fans, which basically consists of high-speed fans able to alternate their airflow, meant to improve heat dissipation, lower the amount of gathered dust and reduce noise.

Acer also includes an accessory called Predator FrostCore with these laptops, which is an extra fan that can replace the optical drive and will help with cooling. And last but not least, the Predators will include a fan management software called CoolBoost, which will allow you to adjust the air flow and fan-speed.

So at least on a first look, Acer’s engineers are aware of the crucial role the cooling has on such computers and took the necessary steps to combat throttling and performance loss, but we’ll have to see how the system perform in real-life before we get to draw any conclusions. 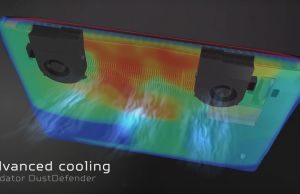 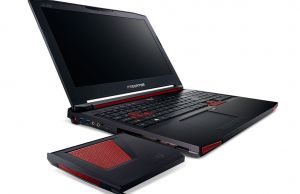 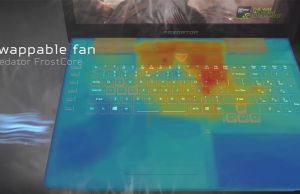 These aside, there are a few other things worth mentioned here. First of all, both the 15 and 17-inch Predators should punch high-quality sound, with a 2.1 speakers system (6W) on the smaller model and a 4.2 system (12W) on the larger version, both with Dolby Audio Surround. The woofers are placed on the belly, while the speakers are on the front lips, pushing sound towards users. Gamers tend to use headphones often though, and Acer thought about that as well, making sure the 3.5mm jack can support premium headphones with an impedance of up to 600 ohms.

Besides this, I should add a few words about the Killer DoubleShot Pro connectivity Acer chose for this device, which allows us to use the Wired and the dual-band WiFi AC connections simultaneously, for a faster and more reliable network access. Users also have the option of configuring which app uses the Gigabit LAN and which uses the WiFi solutions.

Last but not least it’s worth adding that Acer put some large 88 Wh batteries on these two machines, which should offer up to 2 hours of gaming and roughly 5 hours of daily use between charges. Battery life is perhaps not very important on such computers, but it’s still healpfull to be able to use the computer on battery when needed.

Update: Don’t forget to check out my detailed review of the Predator 15 and Predator 17 for more in-depth details.

Acer will have the Acer Predators in stores in November, with the 15-inch model starting at 1599 eur over here, while the 17-inch version will start at 1799 eur. They’ll go even cheaper in the US, with the Predator 15 starting at $1499 and the Predator 17 at $1599. Higher end versions with Core i7 processors and Nvidia 980M graphics will go for over 2G.

That puts them on par with the competition, and these Predators pack a lot of hidden goodies behind the close doors, besides the beastly specs.

So are these a good buy? Well, they sure seem so on paper, and we’re really excited to get our hands on them in the months to come for proper reviews. Till then, all I can say is “Keep an eye on these Predators”, and if you’re interested in gaming machines, check out our detailed post on the best gaming ultraportables you can buy these days or our gaming laptop’s reviews in this section.