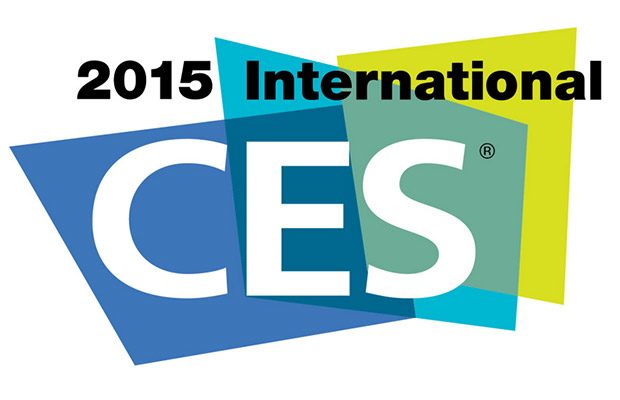 I’m not attending CES this year, but I should have, as ultrabook news are flying in from every corner.

As expected, Intel finally unveiled their Broadwell Core U architecture and as a result, most manufacturers are bringing their 2015 ultraportables to light. These new products will be available in stores in the next few months, so you’ll still have to hold your horses for a little while, but if you’re after a top-of-the-line ultrabook in this first half of 2015, you’ll be delighted with all the new launches. Lenovo, Asus, Dell, Acer, Samsung and even Apple are just some of the OEMs who presented new products on the show’s floors, some behind the closed doors.

Update: See this article for a detailed list of all the new Broadwell ultrabooks available right now.

But before we jump to the actual devices, let me get back to that Intel Broadwell U platform for a second. Intel shrink the die and moved to a 14 nm lithography, and as a result, the new CPUs are physically smaller than their Haswell predecessors. Intel promises 20 to 30 % increase in efficiency, faster graphics and a more diverse range of processors, among many others, but at the same time the Broadwell offerings still include only 15 and 28W TDP CPUs. And that makes me wonder what the real difference between similar Haswell and Broadwell Core U processors is going to be in everyday real-life use, both in terms of performance and battery life, which is something I’ll try to answer here on the site in the next few weeks.

Anyway, Anadtech put together a detailed look at Intel’s 5th generation Core U platform, and I advise you check it out over here. 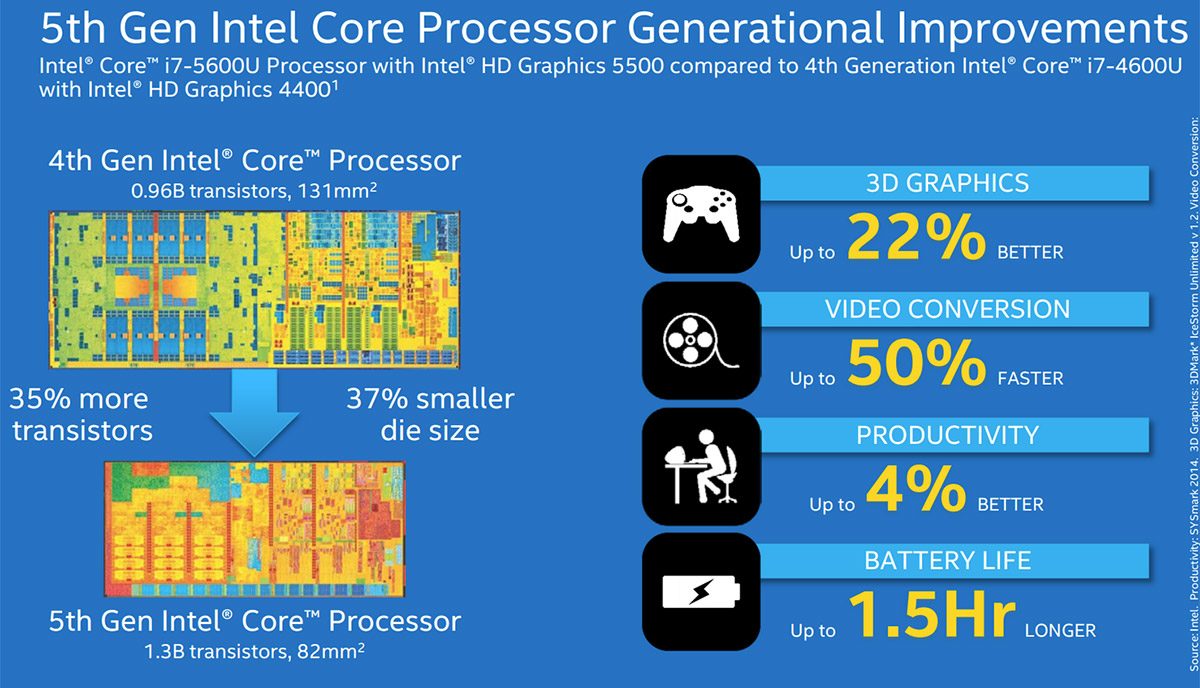 Intel’s Broadwell U hardware powers all the new 2015 ultrabooks

With that out of the way, let’s turn our attention to the new ultraportables.

Update: I already reviewed the Dell XPS 13 over here, check it out for more details.

Dell’s XPS 13 has been one the most compact 13 inch ultrabooks you could buy in these last years. The 2015 edition is even more compact, as you can see from its nearly borderless bezel around the display, is incredibly well made, thanks to its carbon fiber shell, and has lost weight (the non touch version tips the scales at 2.6 lbs, while the touchscreen model weighs about 2.8 pounds). On top of that, the new model now actually offers an SD card slot alongside the 2 USBs and the miniDP port on its edges, something the previous version lacked. 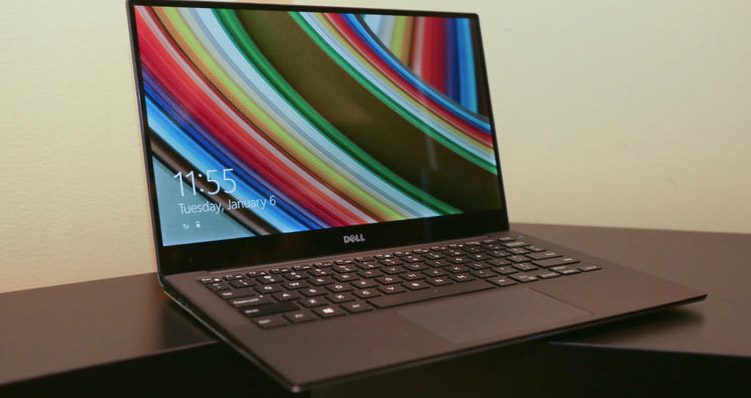 Aside from the outer changes, Dell did some work on the inside as well. The new XPS 13 2015 is going to be bundled with several different Broadwell Core U processors, offers a backlit keyboard, a glass-covered Precision trackpad (and the initial impressions aren’t bad at all) and can be paired with either a 1920 x 1080 px display, or a higher resolution 3200 x 1800 px panel. Last but not least, Dell promises up to 15 hours of life from this little fellow (with the Core i5 processor and FHD screen), which if translates in about 10 hours of daily use, is nothing short of stellar.

Lenovo announced a handful of new ultraportables in these last years, updating their entire range to Broadwell hardware.

We’ll start with the Lenovo ThinkPad X250, which carries on from last year’s X240 and on a first look, seems built mostly on the same frame. It’s a 12.5 inch mini laptop that weighs a little under 3 lbs and is 0.8 inch thick, boosts a solid selection of ports on the sides, several screen and configuration options and a very large battery. There’s a 3 Cell one included inside the case, and an option for either an extra 3 Cell or 6 Cell one, for a total of up to 96W, that should translate in up to 20 hours of battery life on a charge.

The ThinkPad x250 is still limited to only 8 GB of RAM, which might steer away some potential buyers, but as a big novelty, now features mechanical click buttons on top of the trackpad, which go very well with the iconic Trackpoint. So Lenovo addressed at least some of our complains. Hopefully there’s more than that beneath the surface, but only a detailed review could shed more light.

The ThinkPad X250 is expected to start at about $1149, with the higher end configurations retailing for significantly more.

The entire ThinkPad line was updated to Broadwell, which includes the T550/450, E550/E450 and the high-tier X1 Carbon. Last’s year’s X1 Carbon was imo a fiasco, as you can see from my detailed review, but this year Lenovo sticks to a regular keyboard, a redesigned trackpad and a larger 50 Wh battery (up from 44 Wh on the previous model), which should make the X1 Carbon 2015 one of the most interesting ultraportables launched these days. Will be available later this month, starting at $1249.

The ThinkPad Yoga series got Broadwell as well, and besides the classic ThinkPad Yoga 12 and 14 models (the latter with an option for Nvidia 840M graphics), Lenovo introduced a new model, the ThinkPad Yoga 15. All these will be available in February.

But that’s not all. Lenovo unveiled a new Yoga 3 series, with a smaller Yoga 3 11 inch model and a brand new Yoga 3 14, which replaces the Yoga 2 13 model. The 2015 version gets a 14 inch display tucked inside a 13 inch body-size, so the new mid-range Yoga isn’t heavier or larger, just packs a bigger screen. The Yoga 3 11 gets Core M hardware instead of 5th generation Core U processors, but I can’t say for now whether it sports a fanless design or not. I just hope it will last longer on a charge than the Yoga 2 11 tested a while ago here on the site.

Last but not least there’s a new Flex 3 series, which is not just a Broadwell iteration of the older Flex 2 line. The screens now flip to 360 degrees on the Flex 3s and not just up to 270 degrees like on the older models. On top of that, there are no longer just 14 and 15 inch Flex models, but also a smaller Flex 3 11 with an 11.6 inch touchscreen, scheduled to start at only $399.

Oh, and let’s not forget about the Lenovo LavieZ line, a joint venture between Lenovo and NEC. Two models were unveiled, a clamshell version called HZ550, which at only 1.72 lbs, is the lightest 13 inch ultrabook available right now, and a 2-in-1 version called the HZ750, which offers an Yoga like form-factor and weighs 2.04 lbs. These aren’t just light, they are also 16.9 mm thin and durable, as their chassis is made from a magnesium-lithium alloy. They pack powerful guts, with Broadwell U processor, up to 8 GB of RAM and SSD storage, IGZO displays and haven’t compromised on battery life (can’t say how big those batteries are though).

Update: I already reviewed the Acer Aspire S7-393 here on the site.

Acer announced their popular Aspire S7 and the convertible Aspire R13 laptops will be upgraded to Broadwell hardware as well, but without any known changes to their cases and features. Don’t expect major performance increase, but expect both to last up to 10 hours on a single charge, which is a 1-2 hours bump from the 2014 versions.

Both should be available in stores later this month, with the Aspire S7 starting at $1200  and the R13 and $800, but each will be available in several configurations, with either FHD and WQHD screen, Core i5/i7 5th gen processors, 4/8 GB of RAM and various storage solutions (from what we know the S7 is still going to support up to 256 GB Raid 0 configs, while the R13 can get up to 1 TB Raid 0 storage).

We’ve seen the Asus Transformer Book Chi T300 before, it was first unveiled in June last year at Computex and later showcased at IFA in September. It’s now finally ready for production and it will go on sale soon for $699 and up.

Update: I’ve reviewed the CHi T300 here on the site, follow this link for the detailed article.

The 2015 Samsung ATIV Book 9 is also built on Intel’s lower power Core M platform, and just like the Asus Zenbook UX305 (which BTW sells for an amazingly good price these days), is a fanless mini laptop.

It packs a 12.2 inch 2560 x 1600 px matte display with a supposedly very bright IPS panel, Core M hardware, an island keyboard and a spacious trackpad, all tucked inside an only 2 lbs body, which makes it one of the lightest mini laptops out there. Samsung announced up to 10.5 hours of battery life, but there are not exact details on the battery capacity or the exact CPU inside this laptop.

We do know that it will be available sometimes in the first quarter of $2015 and will start at $1199, which puts it in the same price-range with the Lenovo Yoga 3 Pro. Pricey!

Rumors on a the long awaited Retina Macbook Air have started popping here and there, including some detailed pics (or renders) of the new device, which is supposedly going to be more compact than the existing MBA 11, despite packing a 12 inch display. Check out this post for more details, but we’re going to have an in-depth look at these rumors in a different clip. 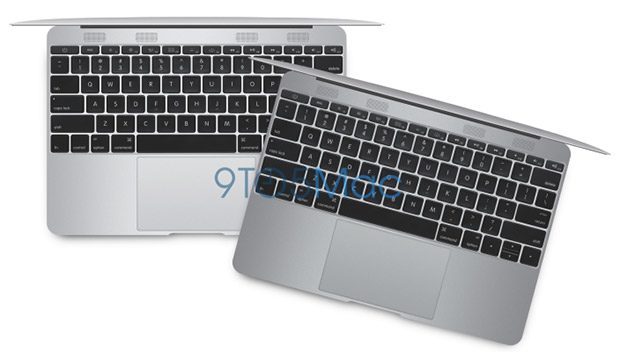 Alright, that’s about it for now. Let me know what you think about these devices in the comments section below and stay close, we’re going to get in depth with all these new releases here on the site in the next few days.

Disclaimer: Our content is reader-supported. If you buy through some of the links on our site, we may earn a commission. Learn more.
Andrei Girbea, Editor-in-Chief. I've been covering mobile computers since the 2000s and you'll mostly find reviews and thorough guides written by me here on the site.
← Previous Story Asus N551JK, EeeBook X205TA and X555 reviews
Next Story → Intel SandyBridge Core i7-2620M vs Intel Broadwell U i5 and i7 processors