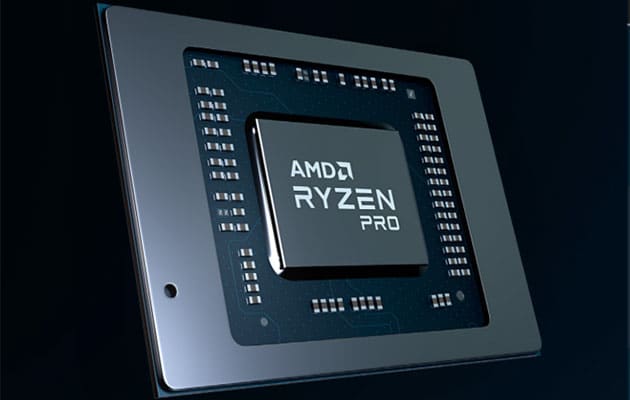 Earlier this year, Lenovo and HP announced a handful of AMD 4000 Pro Mobile business laptops, and the platform is finally available.

OEMs can configure these at between 12.5 to 25W in their various implementations, so you should expect performance and efficiency on par with the consumer Ryzen 4000 models, and a significant boost over the rumored (for now) Intel Comet Lake vPro lineup, which tops at the 6C/12t Core i7-10810U.

They’re also a significant step-up from the previous Ryzen 3000 Pro series, as illustrated in AMD’s marketing materials included below.

These Ryzen 4000 Pro processors are built on the same 7 nm Zen2 Renoir architecture as the consumer Ryzen products, but integrate a couple of extra “AMD Pro” technologies: 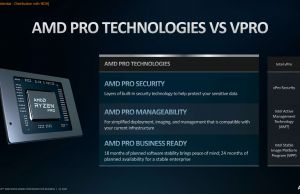 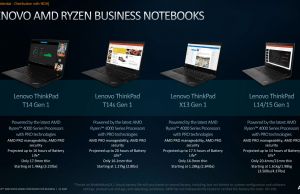 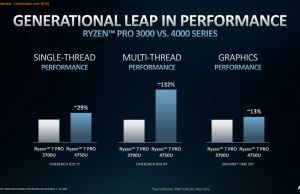 What does this all mean for us, regular buyers?

Well, pretty much that AMD hardware is going to be implemented in better laptops this year, which is excellent news, considering the good job AMD did with this hardware generation.

They’re still not winning the highest tier designs, though, such as the ThinkPad X1 Carbon, the ExpertBook B9 or the Latitude 14. For now.

Anyway, before we get to the list of Ryzen 4000 Pro laptops available in 2020, here’s a quick specs sheet of these APUs, and a quick comparison to the Intel Comet Lake Core i7-10810U, currently the best alternative from team Blue.

We’re not talking benchmarks and performance in this article, but I’ll just mention that AMD claims their platform will be on-par with Intel’s in terms of single-core performance, and roughly 1.5 – 2x more capable in multi-threaded loads. Judging by what we know about the consumers Ryzen 7 4800U/4700U implementations so far, that’s most likely not far fetched. 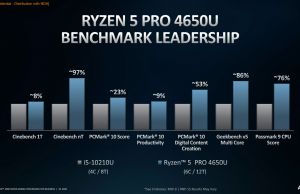 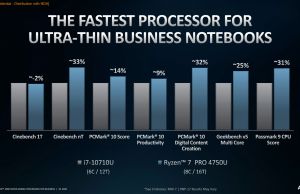 Most OEMs are still going to offer Intel and AMD configurations of their products, so we’ll know how the two compare in a similar chassis in due time.

For now, this article gathers a complete selection of all the Ryzen 4000 Pro ultraportable business announced right now. Like most of our lists, this one is also a work in progress, and some of the info is based on rumors and early leaks. Thus, if you spot errors or know of any product that should be in here and is not, please give us a heads-up in the comments section at the end of the article.

Lower-tier configurations based on AMD Ryzen 5 Pro 4650U and consumer Ryzen 7/5 APUs are also available for most of the devices listed above.

Look for updates in the near future, and also check out our detailed list of consumer Ryzen 4000 U laptops, as well as our list of performance Ryzen 4000 H notebooks.

Disclaimer: Our content is reader-supported. If you buy through some of the links on our site, we may earn a commission. Learn more.
Andrei Girbea, Editor-in-Chief of Ultrabookreview.com. I've been covering mobile computers since the 2000s and you'll mostly find reviews and thorough guides written by me here on the site.
← Previous Story Intel Core i7-10875H (8 Core, 10th gen) laptops – the complete list
Next Story → The complete list of Nvidia GeForce MX350 and MX330 portable laptops