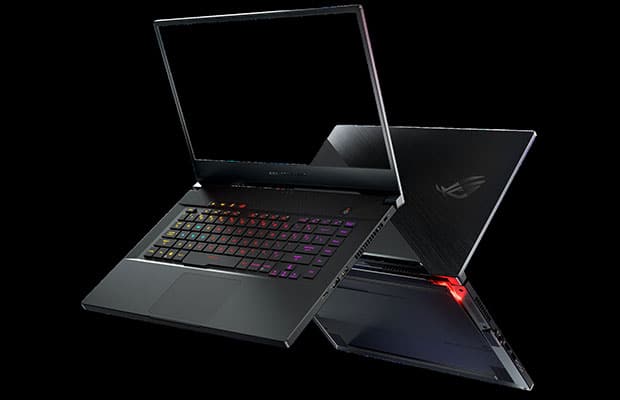 While the Duo GX550 is now the top-of-the-line offer in the ROG Zephyrus lineup, Asus have also updated their 15 and 17-inch Zephyrus S models for this generation.

This aside, the two are merely hardware bumps of the 2019 iteration, built on the exact same chassis and with the same particularities, but with an 8-Core Intel Core i7-10875H processor, up to RTX 2080 Super 90W graphics with ROG Boost, Wireless 6, and 300Hz IPS displays with Pantone validation, as well as the dual Optimus/GSync mode introduced last year.

We’ve added a quick specs sheet of the two down below, for comparison.

Update: Our detailed review of the Zephyrus S15 GX502 is available here.

We’re still developing this post and updating the final details, so there might be some errors up there.

For the most part, though, our detailed reviews of the GX502 and GX701 will offer you most of what you should know on these two, especially the sections that cover the design and build quality, the typing experience, the IO and overall functionality.

The changes are primarily in the hardware specs, where that 8-Core Intel CPU should provide a significant bump in multi-threaded and productivity loads, and where that 2080 Super might also offer a small boost in gaming performance. Keep in mind that Asus use a liquid metal compound for the CPU on their entire 2020 ROG lineup, which should help with both temperatures and noise levels.

That aside, the 300 Hz IPS displays are slight bumps from the 144/240 Hz options in the 2019 configuration, with mostly the same characteristics: matte finishing, roughly 300-nits of brightness and 800:1 contrast, 70%+ coverage of Adobe RGB and factory calibration with a Pantone certification. They’re great for gaming and daily use, and fine for occasional color accurate work. Not sure if a 4K 100% AdobeRGB panel option is also offered for the S15/S17 models, but it might be, since it’s a configuration option for the Zephyrus M15 and the Zephyrus Duo.

These Zephyrus S models still get the dual Optimus/GSync mode implemented in the past, which requires opting for one or the other, with a restart in between. That was cool last year, but not so much this year when other laptops implement the Advanced Optimus technology package from Nvidia, which allows the system to actively switch between the iGPU/dGPU on the fly.

Finally, keep in mind these two products are fairly different. The GX502 is a more standard design with a mid-placed keyboard and regular arm-rest/clickpad, while the GX701 is the inverted design, with a forward-placed keyboard and the entire top part of the chassis reserved for the hardware and cooling. That makes it rather impractical on the go, but nice on a desk and cooler on the hands with demanding loads. It also makes it somewhat faster, due to its more advanced thermal module.

The previous GX701 was the only ultraportable with a 100W version of the RTX 2080 chip, and this generation might carry on those footsteps as well. That doesn’t mean much in terms of real-life gains compared to the 90W RTX 2080s implemented in most ultraportables, but it’s a slight boost from the base-level 80W implementations, as illustrated below.

Disclaimer: Our content is reader-supported. If you buy through some of the links on our site, we may earn a commission. Learn more.
Andrei Girbea, Editor-in-Chief. I've been covering mobile computers since the 2000s and you'll mostly find reviews and thorough guides written by me here on the site.
← Previous Story Asus ROG Strix SCAR IV 15 G532 and SCAR 17 G732 updates – what to expect
Next Story → ASUS TUF Gaming A15 FA506 review (FA506IV model – Ryzen 7 4800H, RTX 2060 90W)