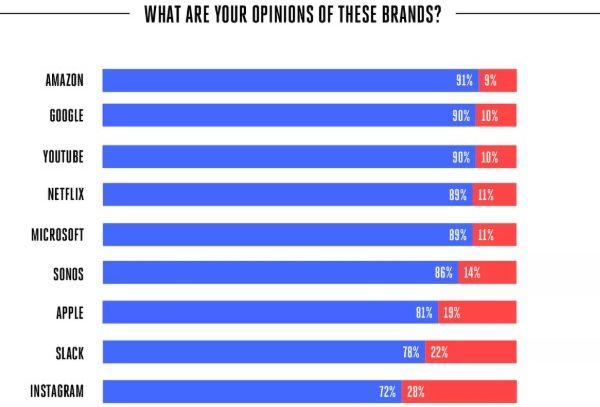 Amazon, Google, YouTube, Microsoft, Apple, and Facebook have slightly battered reputations in the online world of technology enthusiasts, but it seems that the masses still have overwhelmingly positive impressions of these “Big Tech” companies ⁠— if a recent survey conducted by The Verge is any indication.

In a December “Verge Tech Trust Survey” conducted with a sample of 1123 people intended to be representative of the US population, respondents were asked to give their opinions on 10 of the largest tech brands in the US. The list included:

When asked whether they held a favourable/unfavourable view of the above brands (note that many of these brands are owned by the same parent companies), Amazon, Google, YouTube, Netflix, and Microsoft all received approval ratings of about 90%. Apple was viewed by 81% of respondents positively, and 71% had a positive impression of Facebook. Twitter was squarely at the bottom, but still had a clearly majority of 61% of respondents approving of the platform.

When asked how the brands impacted society (positively, neutrally, or negatively), very few people believed the firms had negative impacts. Google, Amazon, Microsoft, Apple, and YouTube ranged between 3-6% for “negative” responses, with the majority believing the brands had mostly positive impacts on society. The exceptions were social media platforms Facebook, Instragram, and Twitter, which saw 25%, 17%, and 26% unfavourable responses, respectively. The most “neutral” brands in terms of impact were Slack (49%), Sonos (59%), Instagram (47%) and Twitter (43%).

The respondents didn’t seem to mind the rocky history of these tech giants when it came to data privacy, either: When asked whether they trusted each company with their information, Microsoft, Amazon, and Netflix led the pack with 75%, 73%, and 71% approval, respectively. Interestingly, Apple and Google both saw the same 69% approval rates, despite their highly divergent views on the privacy of their customers’ data.

I’ve just highlighted what I think are the most important results here, but the rest of the survey results are viewable on the the Verge link at the start of this article. Although only about 1100 people were surveyed, I would not be surprised if it was indeed representative of the views of the American population at large.

For me, it’s a reminder that while we here in the bubble of tech journalism care about the little details, large swaths of the population are not concerned with what they consider as minutiae. If I had to make a conjecture based on the highly positive opinions of Amazon, Google, YouTube, Netflix, and Microsoft, I’d say that people look at these brands and companies in terms of how convenient they make their lives in terms of consuming goods and media, and are not much concerned with issues of undue influence in government and society or their handling of private data.

The results of the survey come just as renewed calls for government regulation of Big Tech in the United States are making the news cycle.

What’s your opinion on Big Tech in the US? Should they be subject to regulations on privacy and free speech despite being private companies? Leave a comment below to continue the conversation.