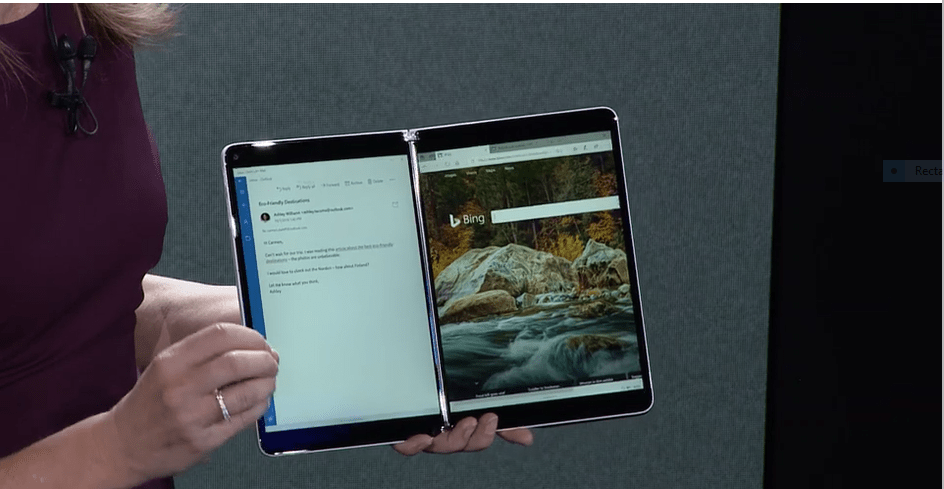 Update 2019-10-02 8:50 PM CST: I have added my personal opinions on the device and my speculation as to its future. These can be found at the end of this article, after the Release Date section.

Microsoft surprised the tech world today with the announcement of an in-development product at their Surface event. The Surface Neo is a dual-screen tablet running a specialized version of Windows tailored to take advantage of the two displays.

The device folds open like a typical clamshell laptop to reveal the two 9-inch touch displays. When unfolded, the Neo is a mere 5.6 mm thin. The tablet is also fairly light at 655 grams. Microsoft claims the Neo uses the “thinnest LCD ever created” to slim down as much as possible, and the Neo uses Gorilla Glass to protect the panel.

We did note that the screens are not OLED, at least in their current state. Given the tech industry’s proclivity for OLED panels, this may be a criticism if the final product only uses LCDs, especially considering Neo will be cooking for over a year.

The displays can fold a full 360-degrees around, allowing users to use the Neo in a variety of orientations. The hinges are also robust enough to hold a display up at an angle, like a traditional laptop, while the other rests flat on a surface.

The revamped Surface Pen can mount to the Neo’s back, seemingly by magnets, for storage and charging. There’s also a new keyboard for the Neo that also attaches to the back of one of the screens. This keyboard can flip around and set on the bottom display in landscape orientation. 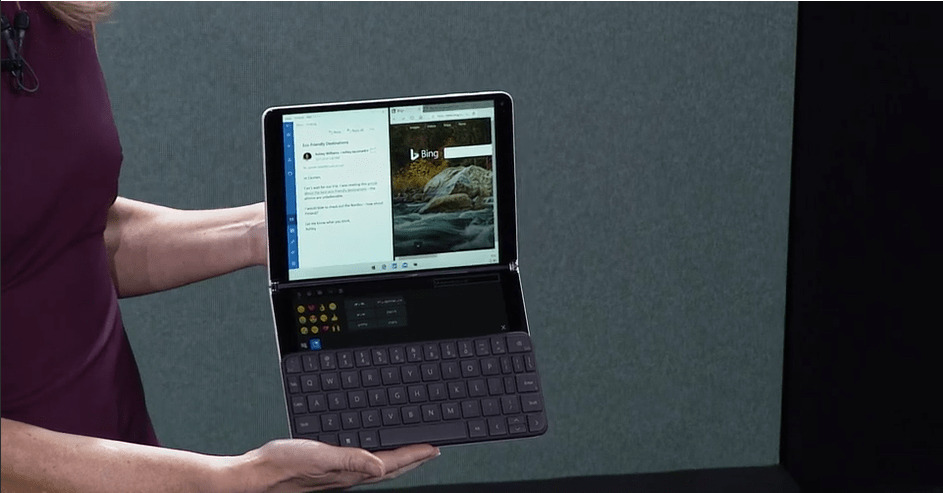 When placed, this keyboard prompts the Neo to display a context menu above it. In the demonstration today, the upper half of the bottom display became filled with Emojis and GIFs that could be inserted into a message, sort of like a tall TouchBar from Apple’s MacBook Pro line.

The keyboard can also slide up to the top of the display, which prompts a trackpad-like section to appear underneath the keyboard. This is a nice feature, but touchscreens usually offer far less accurate tracking than a standard trackpad.

Considering the device’s small form factor and touch-centric design, though, this shouldn’t present much of a problem. 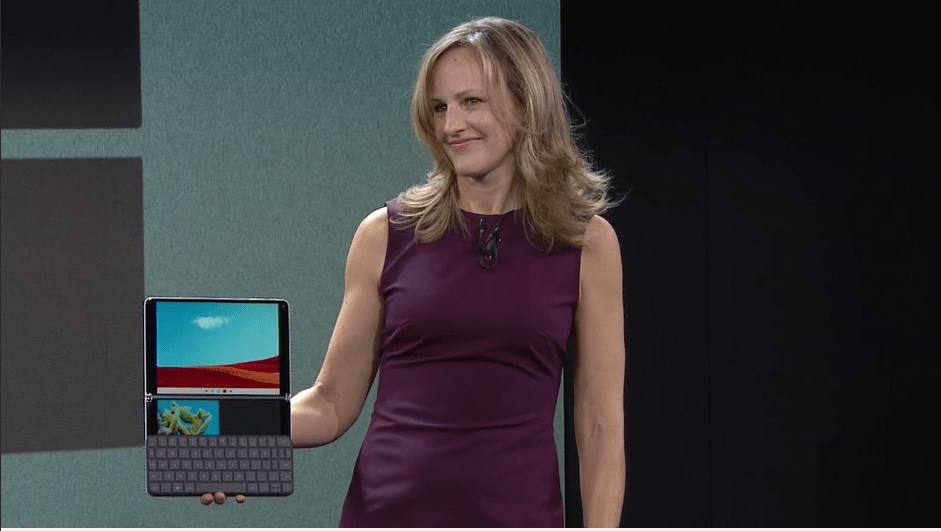 According to Microsoft, the Neo is compatible with all Windows apps, including Outlook and MS Office, but the device runs a customized version of Windows. Dubbed Windows 10X, the new flavor of Redmond’s operating system is built around the two displays.

As such, Microsoft states that Windows 10X can take full advantage of the form factor: Sliding an app from one screen to another looks reasonably smooth, and apps look to be able to fill both displays at once. Microsoft also demonstrated a “picture-in-picture” type feature that will allow users to binge their favorite Netflix series in a small pop-out on one screen while (presumably) getting some work done on the other.

The Surface Neo is still a concept at this point. While a few working models were used during the demonstration, Microsoft said that the Neo won’t be ready until at least the 2020 Holiday season. The company said they announced Neo so early because they want to take fans and developers along on the journey through development and on to delivery.

My Opinions and Conclusion

Caveat: All opinions forthcoming are based on the prototype shown, which is not slated for official release until late 2020. While there are some innovative ideas on display here, my early reaction is that the Surface Neo feels like a confused response to an ever-changing market. This isn’t unusual for Microsoft; the company tends to take ideas that other manufacturers have tried (2-in-1s, detachable screens, powerful AiOs) and refine them to their vision of what a Windows device should be. While this worked to some extent with the Surface Pro line and the Surface Laptop, other devices (e.g., the Surface Studio) flopped upon release and were relegated to small, niche markets.

The Surface Neo looks to me like it might be more Surface Studio than Surface Pro in that regard. The tablet/foldable/touch-only laptop has been done with Lenovo’s ill-fated Yoga Book (my review here) but it’s a form factor that really needs refinement improvements in touch-input technology. In the tablet and phone markets, Apple and Samsung have long ruled with their various phones and tablets, and the Surface Neo is a bastardization of both competitors’ latest ideas. The Surface Neo tries to combine the smooth, touch-centered software of iPad OS with the folding form factor of the Galaxy Fold but my opinion is that it ultimately feels like a compromise on both ends.

Here’s the rub: Windows in its current form doesn’t work very well in a tablet form factor. While Windows 10 can integrate touch controls, the OS ultimately revolves around a traditional mouse-and-keyboard input style. The magnetic keyboard may alleviate some of this, and customization in Windows 10X will likely help the software be more touch-friendly, but at its core, the Surface Neo is a Windows device. 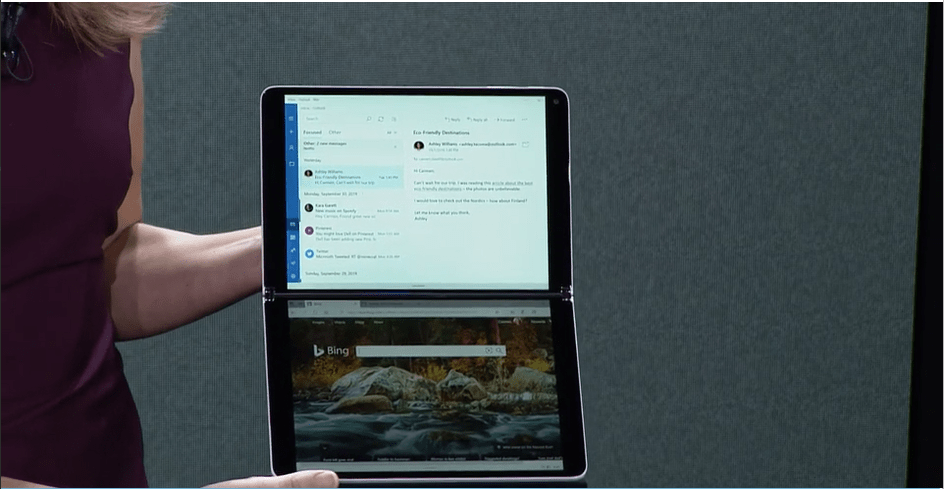 An enduring criticism of the Surface Pro line, perhaps the best comparison for analyzing the Surface Neo, is that the Type Cover isn’t included with the device; users need to fork out additional money to make the Surface Pro truly “usable” in the minds of many. The Surface Neo relies on touch input more than the Surface Pro, and while it doesn’t seem like Microsoft will market their new tablet-esque device as a workstation, that will undoubtedly be the only thing that differentiates it from better (and cheaper) competitors.

There is one thing that sets the Surface Pro apart from the sea of capable Android tablets and the iPad family: it runs Windows. You can get work done with the Surface Pro, which isn’t something easily done with an Android tablet or an iPad. (Obviously, iPad OS may change this paradigm). Windows 10X is certain to be what people will be directed to when they ask why they should purchase the Surface Neo. To that end, I don’t think the Surface Neo offers that much more than a larger tablet.

Yes, the dual-screen form factor looks cool, but it offers about as much screen real estate as a 12.9-inch iPad Pro. Since iPad OS supports split-screen mode, the key gimmick of the Surface Neo is already moot. Additionally, a large tablet like the iPad Pro does not have the hinge interrupting the middle of its screen, creating a more fluid workspace. Add to this the fact that the Surface Neo’s keyboard takes up half of one of the displays, and you have a device that may be less conducive to work than existing products.

As a quick aside, I think it’s fair to compare Microsoft’s new product lineup with Apple’s. The Surface Laptop can be compared to the MacBook/MacBook Pro line, the Surface Pro mirrors the iPad family (including the iPad Pro), and the Surface Duo can (sort of) be considered as Microsoft’s answer to the venerable iPhone. Where does the Surface Neo fit into all of this? It’s bound to be much more expensive than a baseline iPad or Galaxy S Tab, which are devices geared towards content consumption. It’s not well-tuned for productivity and creation, especially considering the iPad Pro and Microsoft’s own Surface Pro line. The Surface Neo currently exists as a novelty, and Microsoft will have a heck of time marketing the thing properly.

Lastly, I will comment on the lack of a few niceties that have been present in tablets for years and are steadily making their way into more mainstream products like the iPad and Galaxy S families. Perhaps most noticeable is the use of LCD panels instead of OLED; it’s odd that a flagship product slated for release over a year from now already feels outdated. Will the Surface Neo sell? I think so, but I don’t think it’ll move as many units as Microsoft needs to justify a Surface Neo 2. To avoid ending up like the Surface Studio and other niche products, the Surface Neo will need to develop quite a bit over the next year before official release.

Disclaimer: Our content is reader-supported. If you buy through some of the links on our site, we may earn a commission. Learn more.
Sam Medley is a seasoned news writer and device reviewer with a passion for telling the story behind technology. His key areas of interest are data privacy, Linux, and gaming (with a particular affinity for retro games). When he's not writing, Sam is producing music, tinkering with electronics, or spending time outside with his wife and four children
← Previous Story Microsoft Surface Pro X – full Windows experience on ARM (Qualcomm)
Next Story → Apple’s iPhone SE will return in 2020, according to analyst Ming-Chi Kuo