Is the base COre i5/FHD configuration of the Dell XPS 15 worth it? 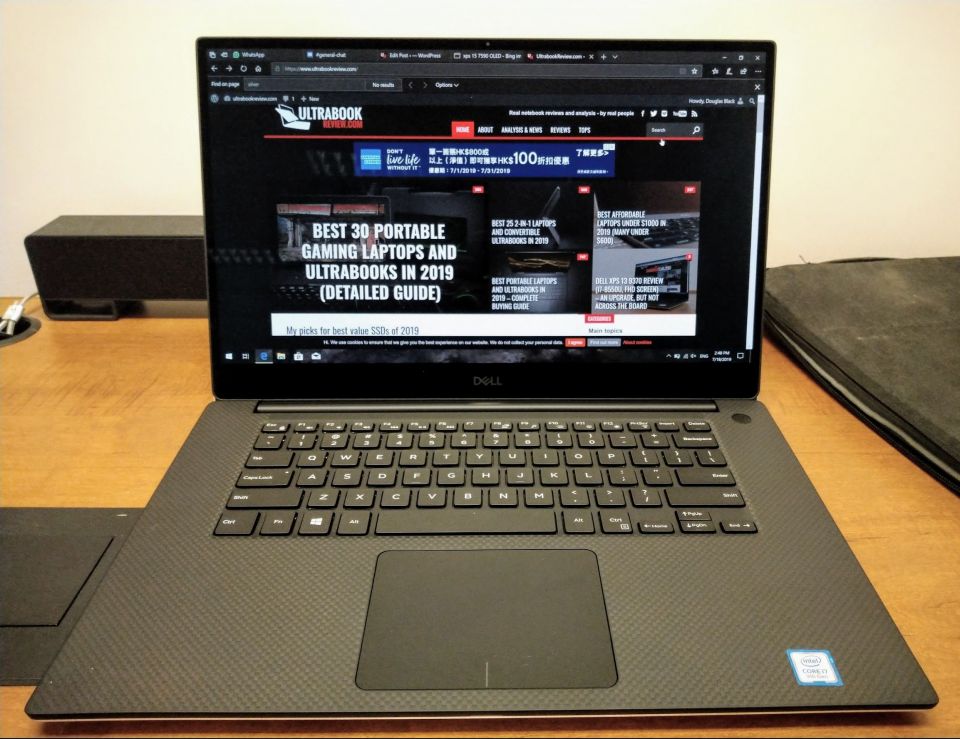 Dell’s XPS 15 series is the ever-popular flagship ultrabook of the American company, and as such it commands a relatively premium price in the lineup: Prices top-out at $2799 USD for a fully-loaded i9-9980HK/64GB/4K OLED/GTX 1650/97WHr configuration.

As such, those of us on a tight budget might be tempted to save a few hundred bucks and opt for the cheapest configuration rather than the more expensive ones available on Dell’s site and elsewhere. Is this a good idea, however? This article will take a look at the specifications and features of the base model XPS 15 7590 from Dell and determine whether it’s worth buying the base model, shelling out more for a higher-end config, or just spending your hard-earned money elsewhere.

At first glance, it might seem like you’re getting a good price on one of the nicest-looking laptops out there. Indeed, if all you want is the appearance of an XPS 15, under $1100 USD might seem like a bargain (assuming you’re buying in the US). 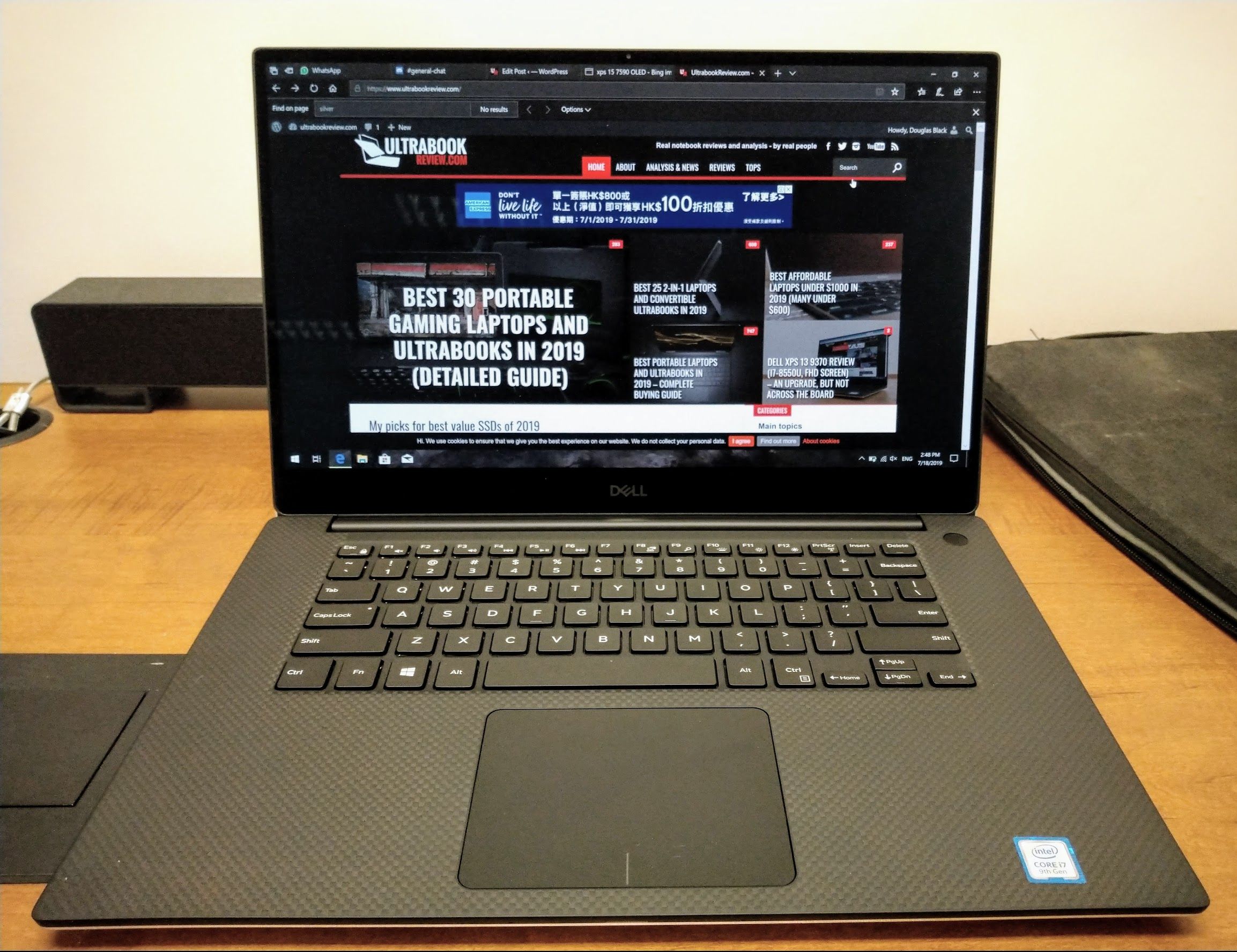 Pictured: The XPS 15 7590 OLED. Visually, the base model will only differ in its FHD matte screen and plastic bezel. (Credit: Douglas Black/UltrabookReview)

Good looks, but what’s underneath?

In other words, while the i5-9300 might be a technically “new” CPU by release date, you’re still looking at what is essentially the same 45W quad-core hyperthreaded CPU you’ve been getting from Intel for the past 4-5 years. With roughly 175 points in CB R15 single-threaded and about 750 points in multi, the i5-9300H is still definitely a competent CPU, but there’s not much an an advantage to getting it over an older laptop with i7-7700HQ (or even 6700HQ, for that matter!) beyond some minor improvements in power efficiency. Don’t forget that the cheapest config is also going to give you only a 56 WHr battery, which isn’t much for a 45W CPU.

That 45W quad-core i5-9300H CPU is still plenty for most tasks (especially gaming) these days, mind you, but that brings us to the biggest problem with this SKU for the price: the lack of GPU.

The base XPS 15 from Dell does not come with the Nvidia GTX 1650 GPU, which is one of the major reasons to consider the XPS 15 7590 this year. The GTX 1650 will get you very solid (60 fps+) framerates in modern games up to 1080p resolution. With the low-end SKU, you’ll have to rely on Intel’s embedded UHD 630 GPU, though. It’s a capable enough GPU for casual games like Minecraft and Rocket league, but it won’t get you much further than that; you’ll have a large laptop that’s no better (or even worse) at playing games than a small ultrabook.

So what do you get?

The i5/integrated graphics SKU gives you a handsome 15-inch 4.0 lb aluminum and carbon-fiber laptop for a bit under $1100 USD. You get a decent selection of ports (including TB3) and the option for a solid on-site warranty. The FHD screen is bright and clear for outdoor viewing, and the keyboard and trackpad are decent enough for most work. You’ll get 2 RAM slots, socketed Wi-Fi, and both NVMe 2280 and 2.5″ SATA bays for expansion, and the included 56 WHr battery will get you anywhere between 5-7 hours of battery life, as well.

However, it becomes increasingly difficult to justify this SKU once you look past the chassis and focus on its size, weight, and performance for the price. In terms of size and weight, the XPS 15 w/ 56 WHr battery weighs 1.8 kg/4.0 lbs. That’s not a lot for a 15-inch desktop replacement laptop, but remember that this SKU gives you a 4/8 core/thread CPU and no GPU. You’re not going to get much better performance with it than you would with a much smaller and lighter ultrabook running on 4-core or even 6-core ULV CPUs ⁠— particularly the 25W configurations found in the very compact XPS 13.

If you like the dimensions of the screen size and the XPS 15 but not the weight, then something like the LG Gram 15 or Acer Swift 15 would make far more sense (especially as they are at similar price points). While 4.0 lbs might not seem like a lot for a 15-inch laptop, I can attest that it’s a very noticeable weight when you’re carrying it with you every day, and you just aren’t getting much benefit for it without the GPU.

All in all, I can’t really suggest anyone buy the cheapest XPS 15 SKU available with the i5, no GPU, and only 56 WHr battery.

For the same price or less, you can get a far more performant gaming laptop from Acer, Asus, Dell, or Lenovo that will run circles around the i5 XPS 15 both in CPU and GPU tasks. If you want good looks with similar CPU performance for the price, you could also get the much smaller and lighter XPS 13 instead. Finally, there are now much lighter 15-inch laptops with quad-core CPUs that will be better choices for a daily work laptop, such as the Acer Swift and LG Gram 15, at similar price points.

If you really want an XPS 15 but are on a budget, the cheapest SKU I would recommend is either the i5 or i7 FHD/GTX 1650/97 WHr config. It’s generally a few hundred more from Dell or Amazon, but you’re getting so much more for the price with the GPU and larger 97 WHr battery.

Disclaimer: Our content is reader-supported. If you buy through some of the links on our site, we may earn a commission. Learn more.
Douglas Black is a Technical Writer, Analyst, Teacher, and DJ currently based in North Carolina.
← Previous Story Six-core (Intel Core i7-10710U) Dell XPS 13 7390 available, what to expect
Next Story → Acer ConceptD 5 Pro review (CN515-71P – Core i7, Quadro T1000, 4K screen)