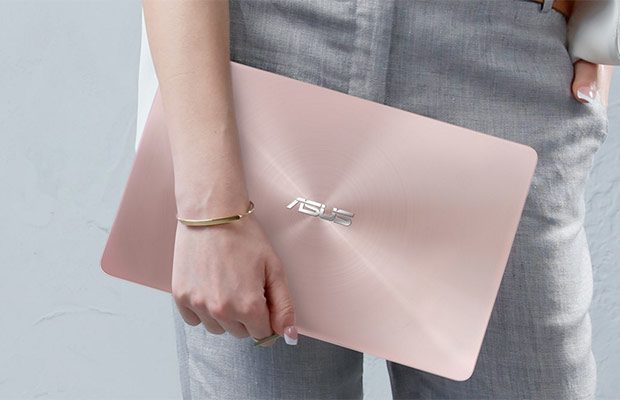 Asus have a long history of releasing multiple laptops with similar traits and as a result, most potential buyers have a hard time setting them apart.

In this post we’re going to address the Zenbook lines of mid-range compact 14-inch laptops that include the UX410UA/UX 410UQ models, the UX3410UA/UX3410UQs and the UX430UA/ UX430UQs. These are all laptops with the width and height of a regular 13-inch ultraportable, but Asus decided to equip them with a larger screen, which results in a narrower bezel. There’s another Zenbook with similar traits, the UX490UA, but we’ll talk about this premium option in another article.

The narrow bezel screen was made popular back in early 2015 by the Dell XPS 13 9343 and was later adopted by other manufacturers as well. It’s an approach that makes a lot of sense, as it gives users a larger screen while keeping the overall size of the laptop compact.

Our article offers a full specs sheet of these laptops, then will take you through what they have in common and in the second part we’ll talk about each model’s own particularities.

Update: If you’re reading this article in 2018 or later, check out our review of the updated Zenbook UX430 series with 8th gen Intel processors and Nvidia MX150 graphics.

Before we proceed, there are two things I have to add here. First of all, these laptops are built on similar hardware platforms, and as with most Zenbook lines, are each available in two versions: one that only gets Intel HD graphics, ending in UA (ex: UX410UA) and another that also gets Nvidia GT 940MX graphics, ending in UQ (ex: UX410UQ). In the US and Europe the UAs tend to be the entry level options and usually available with Core i5 processors, a smaller SSD and less RAM, while the UQs tend to get Core i7 configurations and better specs. But this is not a rule, so there might be different configurations in some regions.

Second, as far as I can tell, the UX410 and UX3410 lines are actually identical, yet for reasons unknown to me Asus decide to sell them under different names in some countries. For instance, the UX3410s are available in Germany right now, while the rest of Europe gets the same products as UX410s.

With those out of the way, you’ll quickly notice from the specs sheet that these lines have much in common.

They’re the same width and length, for one, albeit the UX430s are thinner. They also pack the same matte 14-inch IPS screens, backlit keyboards and trackpads with fingerprint readers, which are all up-to-par with what one should expect from a 2017 ultraportable, as you can tell from our detailed review of the Zenbook UX430 series. You can also find our detailed review of the UX410UQ line over here.

Update: While it might seem that the keyboards on the two are the same, they actually provide different typing experiences. The UX430 gets short stroke keys with nicer feedback, while the UX410 gets deeper strokes, but the overall feedback is a little mushier. See the reviews for details.

These Zenbooks are also built on the same hardware platforms: Intel Kaby Lake Core U (i3-7100U, i5-7200U and i7-7500U) processors, Nvidia GT 940MX graphics (on the UQ models), up to 16 GB of DDR4 memory and SSD storage. But their inner architecture differs in a few ways, which leads to the next part of this article.

What sets them apart

The Zenbook UX430s are thinner and lighter than the UX410s, and that’s what leads to all the aspects that set these series apart.

On the inside, the UX410s offer a RAM DIMM and two types of storage options, an M.2 SATA right near the battery and a 2.5″ bay. The UX430s on the other hand require a larger cooling fan and wider heatpipe, so the RAM is soldered and there’s only enough space for the M.2 SATA storage slot. In other words, you can upgrade the RAM on the UX410 and UX3410 lines, but you can’t on the UX430s, plus you can add a 2.5″ HDD/SSD in these former models for extra storage space, while on the UX430s you’d have to rely solely on M.2 storage.

One other side effect of the thinner profile is the fact that the UX430s run hotter than the UX410s with demanding loads, but even so both are perfectly fine with daily activities, where they can be comfortably use on the lap. On the other hand, users would have to make due with their aggressive fans, which tend to spin all the time and never quiet down, not even with the most basic tasks. Other laptops are able to run passively while light browsing or editing documents, but these Zenbooks cannot and that is unfortunately a common flaw of all the Zenbooks I’ve reviewed recently.

The build is the other major aspect that sets these lines apart. The UX410s and UX3410s are entirely made out of aluminum sheets, with a plastic inner frame. The interior is solid and gets a matte finishing, while the lid-cover gets a brushed metal texture, but due to the piece of metal used for the hood being thin, it shows a fair amount of flex. That’s not unexpected from a mid-range ultraportable these days though. BTW, the UX410s are available in two colors: Quartz Grey or Rose Gold.

The UX430s are a little thinner and as a result, their main deck is sturdier. You should be however careful about the lid as well, as Asus offers the UX430s in two variants: one with a standard brushed aluminum finishing (the Quartz Gray and Shimmer Gold colors), yet a little stronger than on the UX410s, and another with a NIL coating (the Royal Blue and Rose Gold colors). NIL means nano-imprinting lithography and is a glossy surface that feels and looks like glass, but is more durable and less prone to shock damage. These NIL coated variants are however flexible, as you can read in our review, so I’d treat them with care.

The UX430s are only available in some European countries and Canada for the time being, starting at around 900 EUR, with the high end configurations including the same Core i7-7500U CPU, 16 GB of RAM, Nvidia graphics and a 512 GB SSD, for roughly 1300 EUR.

None of these lines are available in the US as of late June 2017 though, and I can’t tell when or even if Asus decides to bring them over there.

Read the appropriate sections in our dedicated reviews for updates on availability: UX430 and UX410.

At the end of the day, the UX430s are more premium versions of the UX410 models, at least till the Zenbook UX490s are going to be released.

Potential buyers going for an UX430 would sacrifice usability to some extent, as these offer less ports and upgrade options, but on the other hand are compact, thin and light laptops that don’t run into any issues with performance and temperatures, like some other thin ultraportables do.

So while the UX410 and UX430 lines are mostly on par in terms of what they can deal with, the difference is made in whether you value the slimmer profile, more distinguished design and overall more friendly keyboard and trackpad of the UX430s, or the practicality and more affordable price tag of the UX410 and UX3410 lines.